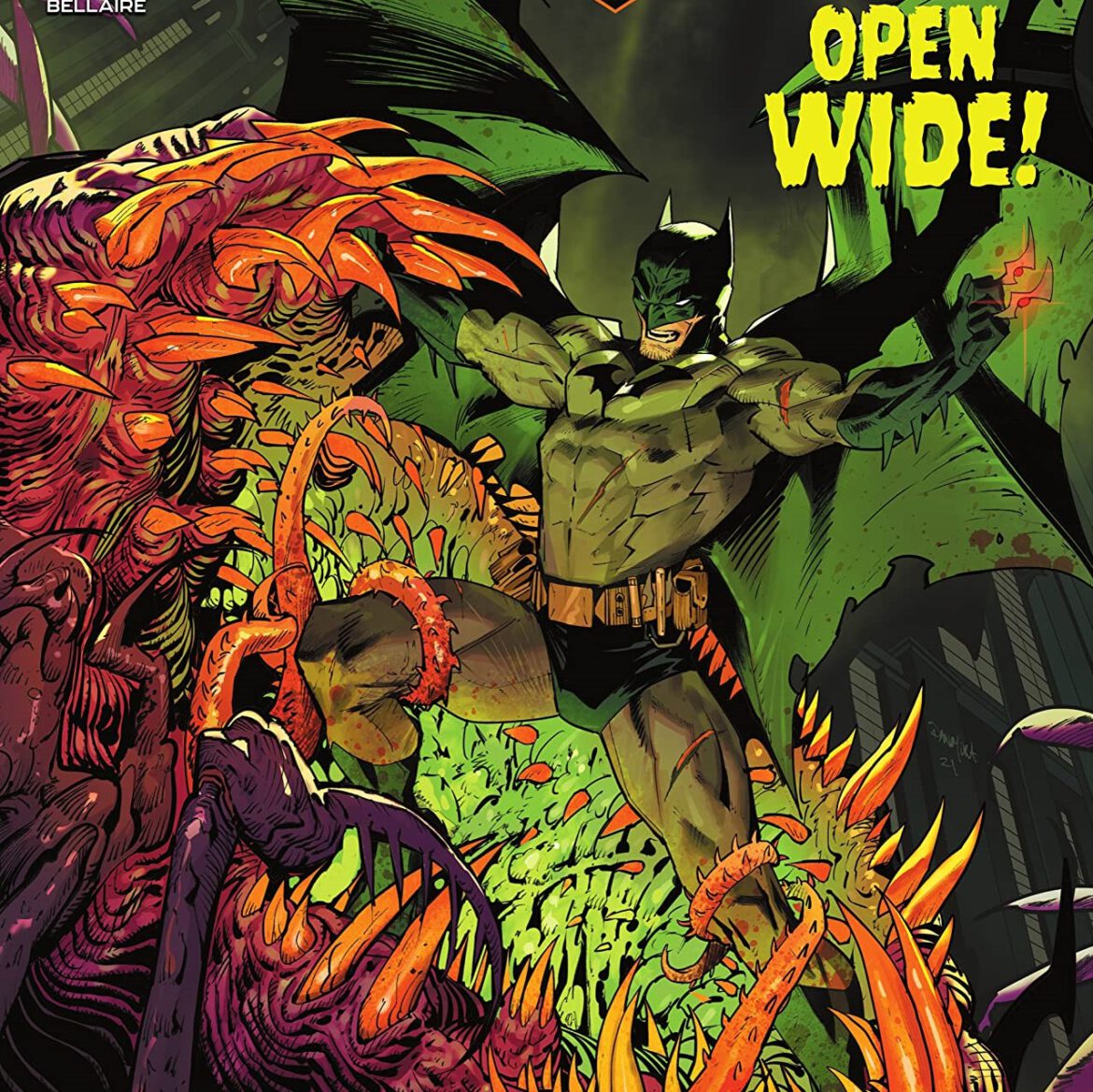 Overview: In Detective Comics #1045, Batman and Mayor Nakano attempt to find common ground in order to find their way out of the parasite-infested Gotham sewers. In the backup story, the foundations of what’s to come in the ‘Shadows of the Bat’ story arc continues to be laid out.

Synopsis: As Detective Comics #1045, Batman is finally able to revive Mayor Nakano. As he helps him to his feet, Oracle is finally able to re-establish a connection with him. Batman relays information about the parasite infestation in the Gotham sewers. As more and more parasite larvae appear in the streets of Gotham, Oracle set members of the Bat-Family in motion to create a containment perimeter. As Batman and Nakano continue their trek through the sewers, they encounter a large mass of parasite larvae, somehow mutated by the slug of the sewer waters. Batman uses the same method used in Detective Comics #1044 to dispose of the bugs, electrocuting them with 10,000 volts of electricity.

As the bugs crumble to their demise, Nakano demands to know how Batman knows so much about the bugs. Batman tells the mayor of the events of his own experience with being infected by the parasite and reveals that Nakano’s own assistant, Hue Vile, was behind the infestation. Nakano doesn’t take the news lightly, now knowing that a member of his own staff was behind the terror plaguing the city. Nakano lashes out at Batman for not revealing this information with his office before, but Batman reminds the mayor of his stance against the masked vigilantes in Gotham and how this hatred blinded him to the terror that was living in his own office.

As the two finally make their way out of the sewers, Batwoman warns Batman of a major problem at the intersection of 49th and 10th. Batman urges the mayor to head in the opposite direction and asks him to have the Magistrate form a perimeter to protect the citizens. Nakano, instead, heads in the same direction as Batman. When he catches up to him, he finds him in the grips of a gigantic parasitic monster. Batman attempts to shock the monster but drops the weapon. Nakano picks it up and uses it on the monster, but it doesn’t have any effect on it. A voice comes from above. It’s Nightwing at the helm of a Magistrate aerial vehicle. He assists Nakano by sending a larger bolt of lightning into the monster, freeing Batman. Batman grabs the mayor right as Nightwing sends another huge bolt into the monster, destroying it.

Back at the Clock Tower, Bruce and Barbara debrief over the events. Babs reveals that the treatment Bruce received to treat his infection prevented him from being infected again. To her surprise, Batman asks her to share the information with Nakano’s office.

At Gotham City Hall, Mayor Nakano is receiving a report from an assistant on the recent events. The mayor reveals he has some info of his own that the office will need to look into as the office needs to focus on generating a new list of the monsters within the streets of Gotham.

Analysis: I am pleasantly surprised with this story ended. As I may have mentioned in a few reviews and even on the TBU Comic Podcast, I didn’t see Batman and the rookie mayor being able to be on the same page. However, Tamaki laid the seeds just for that to happen. Now whether that comes to fruition is still up in the air. Yet, even if that does happen in some sense, readers shouldn’t expect a Batman/Commissioner Gordon style of relationship. Nakano clearly hasn’t been developed this way. But perhaps, just perhaps, the young mayor is maturing. I’ve truly enjoyed how Tamaki has brought him along from the beat cop in Joker War Zone to how he is shown in Detective Comics #1045.

While I won’t mention the unlikable parasites (that I’ve actually enjoyed), I will reiterate my previous comment on appreciating Tamaki’s take on fear State from the perspective of the young mayor. His experiences during the last few issues, and his reactions to the events in the Gotham sewers and street, have allowed me to gain a better appreciation of the character. Credit goes to the creative team for bringing the character along to where he is now. There’s still room for growth, but I have full faith in Tamaki to continue bringing the mayor down this path of enjoyment.

What has also been enjoyable not just from Tamaki, but also in Tynion’s run in Batman, during Fear State has been the inclusion of the Bat-Family throughout the event. No doubt, their appearances help to set up with what’s coming in Shadows of the Bat, but they have played clear roles when they’ve appeared. This was truly the case with Huntress during the Neighborhood arc, but it didn’t end there as we’ve seen Oracle play a vital role (in both books) and also see Kate Kane return in great fashion.

If there is one downside to this arc ending is the loss of Dan Mora on art. Since joining Tamaki on Detective, Mora has provided some of the best art I have seen on these pages in quite a while. His work, along with the colors from Jodie Bellaire will be sorely missed. Granted, things are still looking up for Tec with the likes of Ivan Reis, Max Raynor, and Danny Miki contributing during the event (Jodie Bellaire is slated to contribute as well). However, nothing compares to what Mora has done since Joker War Zone.

So, Nakano’s nightmare is finally over, as is the rest of Fear State. With one month left before Shadows of the Bat kicks off in January, we now get to witness the set-up. Stephanie Phillips has started things with the backup story the last two issues, including this one, but now is the perfect time to place things in the hands of Tamaki, who will be writing the three-month-long weekly event. This is likely to begin with next week’s annual and December’s Detective Comics #1046.

Synopsis: As the backup in Detective Comics #1045 begins, Batman subdues the madman who attempted to attack his co-workers in Detective Comics #1044. After sedating him, Batman begins to investigate the construction site. As he walks through the site that sits on top of where Hugo Strange built his monument to himself (see the pages of Harley Quinn), he steps on a booby trap that releases fear toxin into the air. Batman is caught by it and falls into a vision of his parents hanging out in Arkham Asylum with the Joker. Batman falls through the floor, landing on a scaffold.

As Batman pulls himself up, he’s approached by the elderly man from the last issue. He again reiterates his warning about the Arkham name and stresses the need to destroy the new tower the city is trying to build. He follows the man to the top of the construction crane where he finds they are not alone. Harley Quinn has been waiting for Batman. They need to decide the fate of the tower.

Analysis: There’s not much to add to my thoughts on the backup story in Detective Comics #1045 that I didn’t mention with last issue’s analysis. Phillips continues to provide some background (maybe important, maybe not) for Shadows of the Bat. Unfortunately, I don’t think there’s enough pages as the back-up story to truly allow that to play out. I also am not a fan of the Harley Quinn appearance, but understand it’s needed to tie things together with the story from the pre-Fear State pages of Harley Quinn.

The art is what it is. As mentioned in last issue’s review, I am not a fan.

I have personally enjoyed Tamaki's take on Fear State these last few months. As we turn the page and head towards Shadows of the Bat.