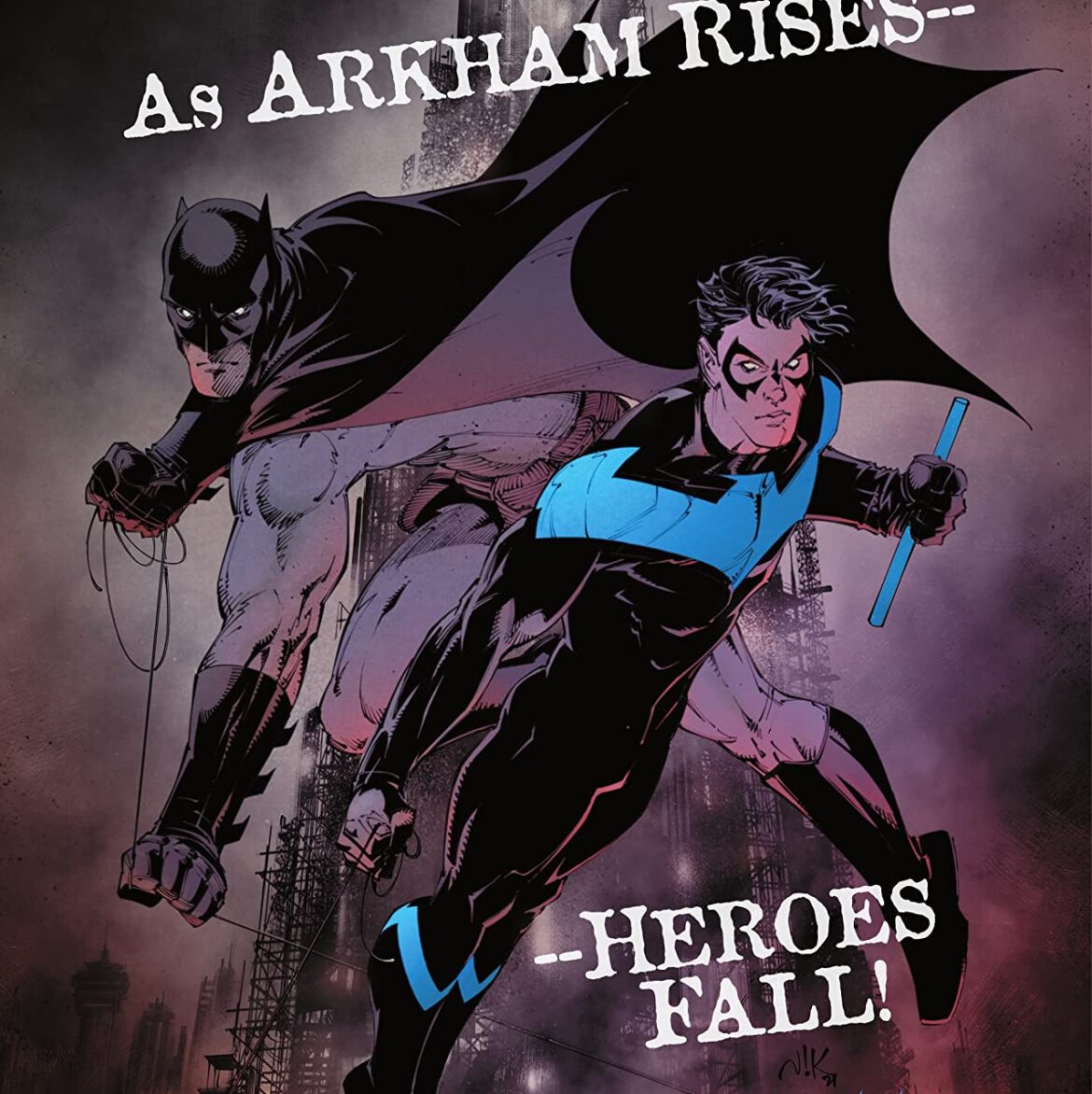 Overview: In Detective Comics 2021 Annual #1, writer Mariko Tamaki prepares readers for Shadows of the Bat with a story involving Batman and Nightwing, who are at odds with each other over their mission in Gotham City.

Synopsis (spoilers ahead): Detective Comics 2021 Annual #1 begins many years ago, as a young Bruce Wayne enjoys a huge ice scream sundae while spending the day with his parents. As they leave a diner, a man jumping from the window of a blood bank above the diner startles them. As he lands on the ground, knife in hand, he stares at the youngest member of the Wayne family, oblivious to the giant piece of glass falling towards him. It tears his arm from his body. As the man lay, bleeding out, Thomas Wayne goes into doctor mode and attempts to save the dying man. Cops are no help as they are willing to let the man die for the crimes he committed in the blood bank. Bruce’s last image as his mother pulls him away is of the injured man staring at him with a deranged smirk on his face.

Later that night, Thomas Wayne returns home to find his young son still up waiting on him. The doctor tells his son that he was able to save the disturbed man from meeting his end. Despite the atrocities the man committed, Thomas tells Bruce that as a doctor, he was required to save him; you save the victim in front of you.

Decades later in the present, Lucius Fox is meeting with a group of developers, pitching the idea of a new Arkham to properly treat the mentally ill of Gotham City. Arkham Asylum is the past, a medieval form of treatment. The project they’re presenting would revolutionize mental health treatment. Those who truly need help would finally receive it. Lucius commends their efforts, but as he looks through their presentation, running across the file of Peter Faust, the man Thomas Wayne saved decade earlier, he cautions them with what they would be facing with opposition from citizens of Gotham who suffered at the hands of former asylum’s inhabitants. Lucius thanks the developers for visiting.

Elsewhere in the Batcave (or do we call it Bat-Garage?), Batman and Nightwing go over the details of a case. As they do so, Batman makes a connection with that of the man his dad once saved. As they go out in search of this new murderer killing in the name of sacred blood, Batman brings a tool which he hopes will help find the unknown villain before the villain strikes again. While they wait, Nightwing questions whether what they’re doing throwing rogues into Arkham Asylum actually works or makes matters worse for the individuals they place there. Bruce counters by saying their job is not to save those that they capture. It’s to protect the citizens of Gotham.

Treat the patient in front of you…

Suddenly, a ping. The device picks up evidence of the murderer’s presence. It traces the man to Reservoir Park, where a citizen finishes up his evening run. Suddenly, a hooded man appears from the darkness with wings made of bones – chicken bones.  The would-be attacker catches the fleeing man. As he goes to stab the runner with a large sacrificial blade, Batman and Nightwing stop him. Nightwing attempts subduing the knife-wielding man by talking to him. Batman, however, has a flashback and realizes the man is the son of Peter Faust. He takes the man out with a kick to the chagrin of his first protégé. Nightwing hands the younger Faust over to the police. As they drive off, there’s an explosion. By the time Nightwing makes it to the burning car, he finds that Faust is gone.

As Peter Faust wakes up, he finds himself amongst Gotham’s forgotten. He’s safe with them as they want him to continue doing the things he’s doing throughout the city. His mission will make the citizens of Gotham City remember those they have forgotten.

Batman and Nightwing sit on top of Crunchie’s Famous Fried Chicken. As Nightwing enjoys his bucket of chicken (did he just walk into the place in costume), Batman reveals that this is the place where Peter Faust finds the bones to make his wings. Batman doesn’t know exactly how he retrieves those bones as Faust doesn’t show up on any surveillance in recent months. Nightwing figures he finds those bones by rummaging through a dumpster behind the building. There, he finds a homeless woman looking for food. He asks for her help in finding Peter, promising that he wouldn’t hurt him.

Peter Faust has another victim, draining his blood as the victim is tied to pole. As Faust attempts recreating his wings of bones, he’s stopped by Batman and Nightwing. Nightwing attempts to calm the man down but fails as the Meager Man jumps from the window wearing his bone wings. As he falls to his certain death, Nightwing jumps after him, and Batman catches them both with a grapnel line.

At the hospital, Nightwing speaks with a doctor (the woman speaking with Lucius Fox earlier) about Peter Faust’s status. She promises him that he will get the help that he needs. Officers around laugh it off, claiming that Faust will find his “help” in prison. This frustrates Nightwing, who claims such attitudes are part of the problem, leaving people sent to prison worse off if they’re ever let out. They have words before the cops remind Nightwing of Nakano’s orders against masks in Gotham. As he turns to leave, Nightwing welcomes the officers to try and stop him.

As Nightwing prepares to get on an elevator, he’s approached by Dr. Chase Meridian. She’s a psychiatrist who’s working on the new Gotham Tower project. She expresses her gratitude to the words he exchanged and promises the new project will reclaim the legacy of the Arkham name as they change the approach to mental health in Gotham. She’ll make sure that Peter becomes one of the first patients when the new hospital opens its doors.

Outside the hospital, Nightwing meets Bruce. They discuss the recent events. As they look upon the new tower rising in the middle of the city, Bruce thanks Dick for reminding him of what his father really taught him decades ago. Do what you can and hope it’s enough.

Save the patient in front of you.

Analysis: Quite a powerful story in Detective Comics 2021 Annual #1 from the duo of Tamaki and Rosenberg as they prepare readers for the weekly event Shadows of the Bat that will begin in January. In laying out this story, they present a powerful argument that grips society today – mental health. They do it in a great way, by having Batman and Nightwing be at odds with one another over what their mission in Gotham should truly be. Now, I won’t get into the argument of the different sides, but I appreciate the argument placed in the forefront.

So how do Tamaki and Rosenberg handle the annual as a prelude to what’s coming in Shadows of the Bat? As expected, things are slow, yet enjoyable. It follows my thoughts about the backup stories in Detective Comics from Stephanie Phillips as well. In some instances, things go well, but by the time the story ends, you find you haven’t moved too far along. Even with the page count of Detective Comics 2021 Annual #1, things move slowly in leading us to Shadows, but it is a good story nonetheless as the writers have Bruce and Dick be at odds with each other over the Bat-Family’s mission in Gotham. Both have strong arguments to back up their beliefs, especially Bruce, who remembers his father’s words to him.

Between the annual and the two backup stories, readers get an idea of how the new Arkham Tower comes together. We’re introduced to new characters, some who may not play a major role in the Shadows event, but some who will. The theme between them all is the same. The ways of the old Arkham Asylum belong in the past & should remain buried in the ashes of A-Day. There’s a new way of handling the mentally ill, despite their criminal acts. Arkham Tower will be the epicenter of this era of behavioral health treatment. This new building will be built in the heart of Gotham City. What could possibly go wrong?

While not her first time in the pages of comic books, Tamaki and Rosenberg give us the debut of Dr. Chase Meridian to main continuity. While she was teased off-panel in Batman #108 (good call, Scott), we now see Bruce Wayne’s beau from Warner-Bros.’ Batman Forever grace the pages of the Batman Universe in main continuity, although her first time in the comics she appeared in alternate universe one-shots and a story arc in Legends of the Dark Knight. It appears that Dr. Meridian will have a prominent role in the upcoming event, being a strong proponent (and employee) of the new Arkham Tower. Are there any other plans in the future for her?

I have been critical of David Lapham’s art as the reviewer of Detective Comics (as a part of the backup stories). My thoughts on his work haven’t changed. It isn’t great at all. However, a member of the TBU Discord server (if you’re not a member, please join us) applied a term that has me looking somewhat differently. It is creepy. When I reviewed Detective Comics #1044, I mentioned the attempt to make things dark. Creepy, however, fits the attempt far better. That being said, I am not a fan of the creepy, unpolished look from Lapham.

Conflict within the Bat-Family is always interesting to see, so I appreciate Tamaki's and Rosenberg's take, especially as she addresses a very real situation in society. Now, with one issue of Detective to go before we really things off in the new year, it will be interesting to see how Tamaki handles Batman's send-off for the next twelve issues, leaving the safety of Gotham City in the hands of his proteges as they investigate the events at the new Arkham Tower.