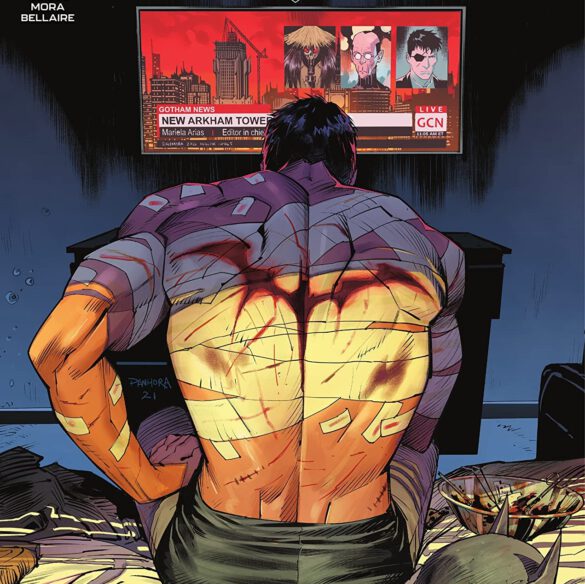 Overview: In Detective Comics #1046, Mariko Tamaki prepares readers for what’s to come in Shadows of the Bat. Plus, we get the final installment of the Foundations backup story.

Story #1: “Out and Gone” by writer Mariko Tamaki and artist Dan Mora

Synopsis: As Detective Comics #1046 begins, a silent alarm is tripped at the Prestige, a complex in downtown Gotham that is home to mostly members of the mob. Oracle picks up on the silent alarm, and Batgirl (Steph) signals she’s going in. Standing amongst the dead and dying bodies is Ana Vulsion who takes pride in her work. As she heads to the basement garage, a bomb goes off on the upper floor, sending rubble towards pedestrians on the street below. Fortunately, Batman is there to rescue, shielding them from disaster.

In the garage, Ana Vulsion continues her route of terror as she stabs a valet. As she gets in a car to leave, she’s confronted by Batgirl. Batgirl attempts to take out the vehicle that Ana is in but is distracted by another bomb going off in the garage. Vulsion’s car heads towards a pedestrian. Batman makes another save then uses his grapnel gun to take out the speeding vehicle, flipping it onto the street. The chaos is over.

Back at HQ, Batwoman and Barbara are discussing the earlier events and how it was possible that Ana Vulsion was on the streets. Babs relays that while the murderer is currently in Blackgate, she’ll be heading to the new Arkham facility once it is opened. Elsewhere in the garage, Steph and Helena are having their own conversation about the recent events when Steph relays that Batman is about to leave Gotham as a result of the events with the Magistrate and the Scarecrow (as seen in Fear State). Suddenly, Helena is distracted by a vision of someone being attacked. She takes off to help; Steph follows her.

At City Hall, Dr. Chase Meridian has arrived to meet with Mayor Nakano. He wants her to work for him as his eyes and ears on the new Arkham project. He doesn’t want the mistakes he made with the Magistrate to occur again. While the new project will have a management team, she will be responsible for assessing that management and determining if the trial project will move forward or not. Meanwhile, at a frigid Gotham park, Batwoman is meeting with Deb Donovan about the Arkham project and the two main players behind the project – Dr. Tobias Wear and Dr. Ocean. Dr. Wear appears to be the face of the project, but there’s so much that’s unknown.

At a nearby construction site, Helena thanks Steph for assisting her in helping the woman being attacked. They talk more about Batman leaving Gotham, but it is obvious something else is on her mind. She leaves her partner sitting on a scaffold.

On a rooftop near the Arkham Tower, Batman meets with Chase Meridian. After implicitly acknowledging his part in being hired by Nakano, Batman reveals the true nature of wanting the psychiatrist involved with the new project. He’s leaving Gotham to get his head on straight. He needs for her to be his eyes and ears while he is gone. He promises she won’t be alone as members of the Bat-Family will be around, whether she sees them or not. The new Arkham project is a huge gamble, but it could also be a fresh start for those who need it. If not, Gotham could be in some serious trouble.

Analysis: The cover to Detective Comics #1046 calls this issue an aftermath to Fear State. However, it’s tough to really see it that way, especially knowing the events beginning next week. Much like the recent annual, Mariko Tamaki does an awesome job of setting up the events beginning next week with Shadows of the Bat. While there is some mention of the events of Fear State, it is not something I would call an aftermath (remember, even Helena’s involvement in Detective Comics occurred before Fear State began). As with the annual, Detective Comics #1046 deals with mental health and really picks up where the annual left off. In looking at it further, Tamaki uses Bruce and Helena as key points how they each are handling their recent experiences. As everyone knows, Batman is leaving Gotham (and has already left if you are following the pages of Batman). We also know that Helena, like the rest of the Bat-Family, will play an important part in Shadows of the Bat. It will be interesting to see how Helena’s state of mind effects her role in the event.

For the past year, I have made the claim that Tamaki was writing the best Batman book in DC’s lineup. I continue to believe this is the case. She has shown a tremendous grasp of the voice of each character she’s writing. When I started reviewing her run on Detective Comics, I highlighted how she was able to write a wonderful Batman story starring everyone but Batman. With this issue, she has laid the pieces in place for us to get a Batman book starring the Bat-Family. I am excited for who we will see over the next three months.

If there is one thing that will be dearly missed in this run that began when Mariko Tamaki came on board will be the art from Dan Mora and the colors from Jodie Bellaire. Since coming aboard with Tamaki in Detective Comics #1034, Mora and Bellaire have provided some of the best work in a Batman book I have seen in a while. Make no mistake, the pages of Detective Comics will be in good hands for the next few months with the likes of Ivan Reis lending his talent to Shadows of the Bat. Unfortunately, it is going to be tough to forget the greatness that Mora and Bellaire have given us over the past year. Hopefully, they both can make a return.

Synopsis: The new Arkham Tower stands trial. It’s fate lays in the hands of an old man, a former Asylum patient, who doesn’t want the evils he experienced to have the chance to live again. The tower bearing the Arkham name must be destroyed. For the defense is Harley Quinn, also a former patient/inmate, who claims that the new tower can’t be condemned before it even opens its doors. The honorable Batman presides over the case. Something doesn’t seem right, however. How can this be real?

Batman awakens to find himself hallucinating under the influence of fear toxin Hugo Strange had stashed in the floorboards. The trio are still standing on the construction crane overlooking the tower, arguing over the merits of allowing the tower to stand. As Harley and Batman continue to talk, the old man heads into the crane and releases its counterweights causing it to lean towards the unfinished tower. Batman sends Harley to stop the old man from causing any more damage as he jumps to secure the crane from crashing into the tower. As Harley tussled with the old man for control on the crane, they both lose their footing, and the old man falls from the crane, his death almost certain. Batman grabs the falling man, however, saving him from meeting his doom.

As the three stand looking at the tower, the old man begins to quote Poe’s “The Fall of the House of Usher.” Batman doesn’t see the new tower in the same light of its predecessor. He sees it as a second chance.

Analysis: I really like the way this backup story in Detective Comics #1046 ended. The arc began with references to Poe and then it ended with Poe. This was brilliantly done by Phillips in tying Poe’s classic to not only Arkham Asylum’s history, but also to the future of the new tower. Will it follow in the footsteps of its predecessor? It’s been the big question of Phillip’s story in the voice of the former Arkham patient. As Shadows begins next week, it will be interesting to see how much of the old man’s warnings will come to fruition (because of course, it’s Gotham).

Throughout the last three reviews of Detective’s backup story, I have consistently found the artwork from David Lapham to be weak, rushed, amateurish, and creepy. While I still feel that it has been the weakest part of the story, it actually works this time. This is said for one reason only – Batman’s hallucination. That was a weird sequence in which Lapham’s heavy, stylized lines actually worked in making the panels work. I think the only artwork that might have been better, would be Riley Rossmo.

That being said, the conclusion serves as a decent backstory heading into Shadows of the Bat.

Next week begins Shadows of the Bat, and I can't wait. Tamaki used this issue to perfectly set up the next few months of a Gotham City without Batman. It's now time to get things started. See you next week.