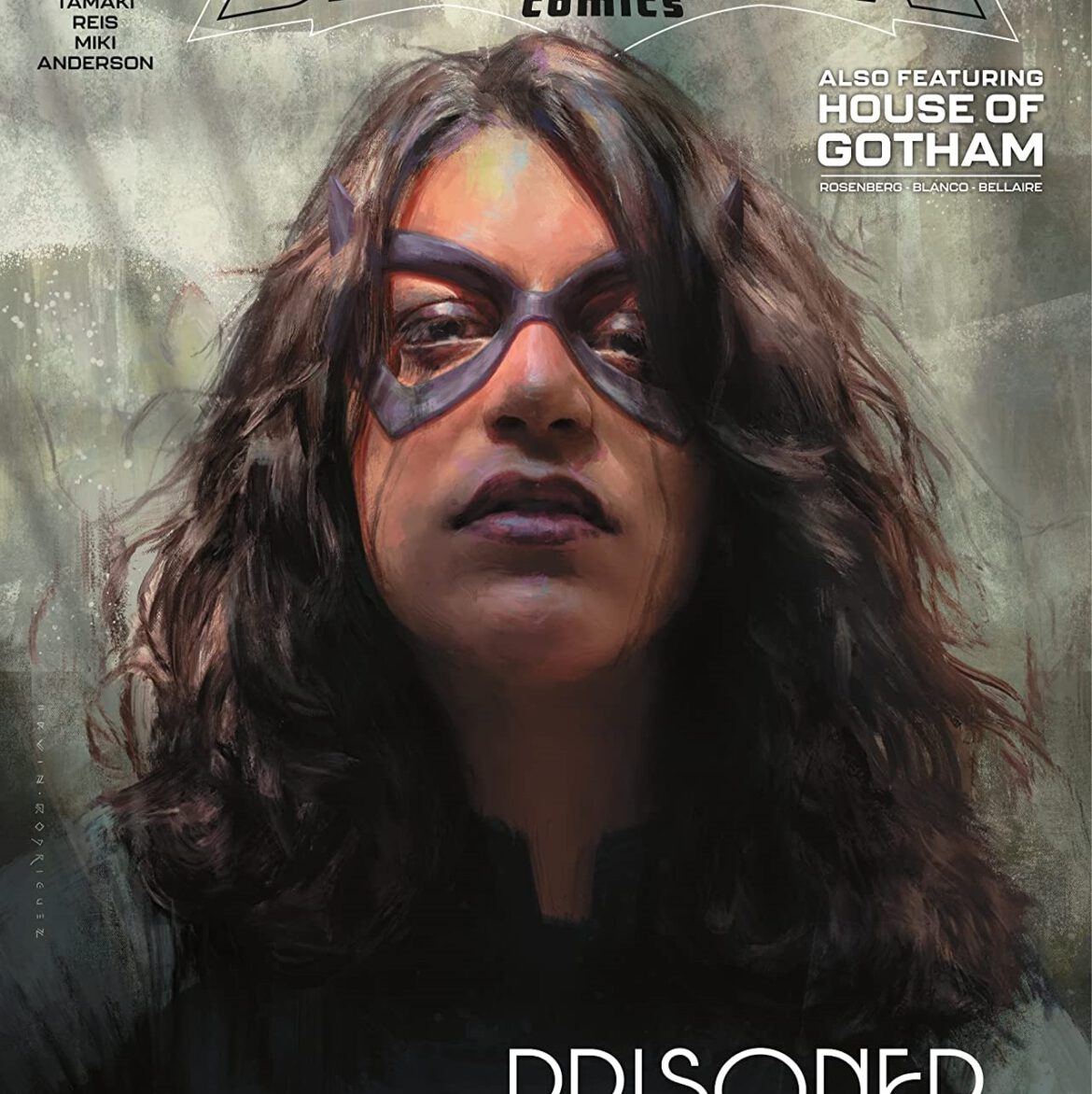 Overview: In Detective Comics #1049, Shadows of the Bat continues as Batwoman looks for the whereabouts of Huntress. Meanwhile, in our backup story, a new rogue makes an appearance in the life of the mysterious boy.

Synopsis:  As Detective Comics #1049 begins, it’s Day 14 of the Arkham Tower project and Ana Vulsion is in a session with Dr. Chase Meridian. She’s discussing a movie that’s been in her head, which is, in fact, a vision of her past. She doesn’t want to discuss any more of it, so Dr. Meridian ends the session until tomorrow. As Ana heads to her room, she is stopped by a maintenance worker with who she’s not familiar. He leads her away.

It’s Dr. Lisa Frow’s (aka Kate Kane, aka Batwoman) first day on the job at the Arkham Tower, and as she receives her ID badge, she asks the whereabouts of Dr. Ocean’s office. “Top floor,” she’s told. “You don’t have access.”

Dr. Meridian introduces herself to the newest staff member and invites Frow to coffee. They discuss the status of the patients and how the medical treatment has been working miracles on even the most dangerous of the Tower’s patients. Dr. Meridian still can’t explain how things are working, but they are making sure the treatments are effective. As Dr. Frow leaves to start her shift, Dr. Meridian warns herself to be careful who she opens up to.

Dr. Frow and another doctor walk into an activity room where they find several patients in the midst of arts and crafts. This includes both Ana Vulsion and Siphon. Dr. Frow is amazed that the patients, several with dangerous records, are allowed to handle scissors in the open. Batwoman walks up to Manuel – Siphon – who’s cutting human figures out of construction paper and thinks back to a time when she and Batman had to take him down after a heinous murder he committed. Siphon asks Dr. Frow for some glue.

Before she is able to respond, Kate notices Ana Vulsion being led away by Marc, the maintenance tech. She stops him, stating that she would escort Ana back to her room. Marc isn’t pleased about this, but he doesn’t put up a fight. Ana seems dazed, but she speaks with Kate about movies as they walk to her room.

Dr. Wear has a visitor, a member of the Party Crashers. Someone is complaining about Marc, himself a Party Crasher whose role is to retrieve product from the hospital to sell on the street but seems to be doing more. The visitor offers to take care of the complainant, but Dr. Wear reveals that the person complaining is a member of the staff. He doesn’t need the news of a dead employee on his hand when he is close to receiving approval of funding from Nakano. The Crasher promises to talk to Marc. Little do they know that they’re being watched. From above, Cassandra watches as the Party Crasher gets in a car and leaves. The Crasher isn’t carrying any product, but Cass is going to follow her to see if she leads to the Crashers’ HQ.

Batwoman, in full costume, walks into a patient room where she finds Huntress, who’s waiting on her. Huntress apologizes for not checking in with the Bat-Family. Kate attempts to talk her into leaving with her or checking out herself, but Helena is clear. She’s not leaving. There’s no surveillance, no plan. She’s fine. Kate, however, needs to leave. A silent alarm has been tripped and Batwoman soon finds herself surrounded by security. They’re no match for her, and she’s able to make her escape.

Back at HQ, Barbara, Kate, and Dick discuss the events, wondering how the alarm get tripped. Kate doesn’t believe Helena did anything but also felt something was off. She promised to keep an eye on her while she remains undercover. This doesn’t seem to satisfy Nightwing who feels Kate gave up on their teammate. Despite Kate’s report that all of the inmates seem calm, something doesn’t seem right to Dick, and he’s afraid for Helena being there alone, stuck in the middle the Party Crashers, drugs, and some of Gotham’s worst villains.

At the Tower, Helena’s calm evening comes to a sudden, terrible end. She sees a vision. It’s Ana Vulsion in her room. Marc is paying her a visit again. Ana’s reaction is different, however. She looks at Marc with a menacing look. Marc wonders if she is off of her meds. She responds that she isn’t on any. The story ends with Marc screaming. A distraught Huntress sees it all.

Analysis: Part by part, Mariko Tamaki peels back another layer of a wonderfully plotted story. As mentioned in my last review, I figured that Huntress was a patient within the Tower. The third part, found in Detective Comics #1049, confirms this. And unlike Kate Kane, Helena is a willing patient. She’s not undercover. As a mentioned a few reviews ago, it seems Tamaki has been setting her up for this for a while, and it came to a head in Detective Comics #1046 as Helena left Steph alone on the rooftops. She clearly isn’t taking the “gift” given to her by Hue Vile well.

This issue answers a few questions from previous issues. One, Tamaki confirms that the Tower project is nothing more than a con from Tobias Wear to drain money from city coffers while using the Party Crashers as drug dealers of pharmaceuticals taken from the hospital. But as Tamaki answers some questions, she presents us with a few more:

One answer might be found in two words – “I’m fine.” We see other patients within the Tower use similar words – Roy Dowd in Part 1 and Ana Vulsion in Part 2. It seems all three are under the same influence. But if it isn’t the drugs controlling them, what – or who – is?

After recording the last episode of the podcast and listening to fellow co-host Ian and I speak about how artists draw different characters in a similar style, I paid closer attention to Reis’ work on this issue. After combing through the panels, it hit me. In the interaction with the female Party Crasher, Tobias Wear took a clear resemblance to Reis’ work on Superman, thus proving our theory. That being said, who cares? Reis’ work continues to shine in Detective Comics #1049. We have one more before he and Brad Anderson turn over the reins of pencils to Max Raynor and Luis Guerrero to take us through the second phase of the event. It will be interesting to see how the new art team handles taking things over.

Synopsis: The backup in Detective Comics #1049 starts at the Martha Wayne Home for Boys, where a young boy is being bullied by another. When he doesn’t react, the young one is attacked and punched. The assailant is stopped by a young Jonathan Crane, who sends the bully, Elliot, inside, punishing him with toilet-scrubbing duty. Crane talks to the boy as to why he always seems to be in a fight. The boy responds that it’s the others who teases him for getting special treatment from Bruce Wayne, as if he was his father. He tells Dr. Crane that he doesn’t want Bruce Wayne to be his father; he wants his own father back. Crane tells him that he needs to dream of something else.

That night, the boy is awakened from a dream by a mysterious, scary figure – the Scarecrow. This frightens the child until the Scarecrow reveals himself to be Jonathan Crane. He tells the boy to not be frightened. He’s working. His background is studying fear in order to learn how people can overcome them. The boy tells Crane that he fears Batman and the Joker. Crane responds that one day, he will turn those fears into strengths.

It’s a new day, and the boy finds himself once again being bullied, this time by Victor. Unlike before, he attacks Victor before being broken up by watching administrators. As they take the boy inside, Dr. Crane tends to Victor, telling him that he should be upset at Bruce Wayne for spoiling the boy so much.

That night, the boy wakes up again. This time he finds himself alone. No one is there but him. He finds the kids being led to a van by the Scarecrow, preaching to them about turning their fears into strengths. Tonight, they destroy one of those fears.

Analysis: If you’ve already listened to the latest of the TBU Comic Podcast, you would know by now that I believe the main character of the story is a young Roy Dowd, aka Nero XIX. It’s uncertain at this point as to why Rosenberg doesn’t reveal his identity. From here on out, it is likely more appropriate to refer to the child as the Boy (capitalized) until his identity is revealed. I mentioned on the comic cast some of the reasons why I feel the child is Nero XIX.

In the chapter found in Detective Comics #1049, we see some of the same as the child is now exposed to another of Batman’s rogues, this time, Scarecrow. Based on the fearless character we saw in Tamaki’s Fear State tie-ins, it is likely that Jonathan Crane will have the most influence on the character’s development. He definitely has taken a liking to the Boy. It’s a wonder as to why Crane didn’t willfully bring him along as he did with the other kids. However, it seems from the interaction with Victor, that he is using the Boy to build hate for Bruce Wayne from the other boys in the home.

Another great story from Tamaki as she inches us closer to Day 24. Fans of Detective Comics should be pleased that this is a weekly event.