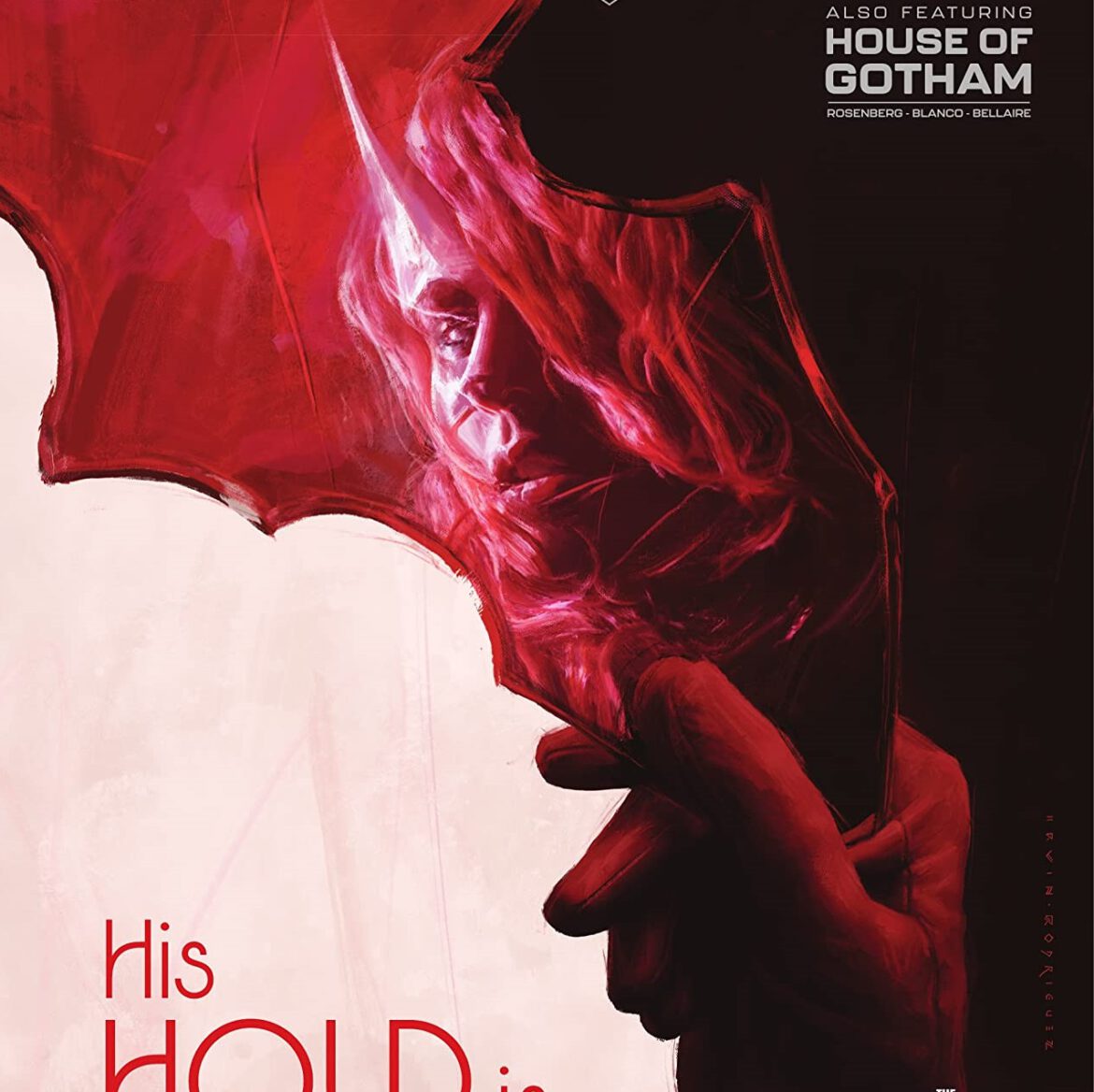 Overview: In Detective Comics #1052, Psycho Pirate’s hold on the inmates of Arkham Tower begins to break as the Bat-Family closes in on the Party Crashers.

Synopsis: Detective Comics #1052 begins a long time ago in Gotham, as Dr. Chase Meridian nearly falls off of a skyscraper as part of the Riddler’s plans, but Batman saves her, leading her to trust him and his family.

On Day 19, five days before everything goes to hell on Day 24, Chase tries to give Mayor Nakano an update but can’t reach him before she has to meet with Helena Bertinelli, once Huntress, now a voluntary inmate at Arkham Tower. However, in the middle of her session, Psycho Pirate passes out from exhaustion, and a viciously violent riot immediately breaks out among the other inmates. Dick Grayson, in disguise as a nursing aide, tries to break things up and defend himself. Dr. Wear wakes up Psycho Pirate, and the supervillain causes everyone in the building to fall asleep.

Oracle, Batwoman, and Batgirl (Stephanie Brown) attempt to piece together what happened in their cave beneath the city, not believing Dr. Wear’s claim of a “gas leak.” Batwoman’s infiltration identity, Dr. Frow, receives a voicemail from Chase, hinting at the truth of Dr. Wear’s con, but Dr. Wear also hears the voicemail, immediately fires “Frow,” and uses Psycho Pirate to force Meridian to call back and apologize. The Bat-Family hears Chase’s reference to patients remembering “tunnels” in their dreams or half-remembered “movies” (actually suppressed memories by Psycho Pirate) and decide to hone in on the Party Crashers’ HQ in those tunnels. Cass, Steph, and Kate take down an entire squad of the Crashers at their base and discover a huge supply of the drugs supposedly being used at Arkham Tower.

Helena tries to remember what happened, taunted by Ana Vulsion, and we see under her bed the words “His hold is breaking” written in blood by a patient who was starting to remember…

Analysis: Mariko Tamaki’s epic tale of the con of Arkham Tower and how it all goes dreadfully, terribly wrong continues with another stellar installment in Detective Comics #1052. Like minor quakes before a huge cataclysm, Psycho Pirate’s slips show us exactly how and why the entire place goes up in terrifying smoke on Day 24, and the way the Bat-Family has to put the pieces that slip out of his mistakes together is a very fun detective story, fitting the title of the comic perfectly. Tamaki also provides great cliffhanger endings, with the bloody “His Hold Is Breaking” under Huntress’s bed really ratcheting up the tension. Some may say that the fact we know the con will fail leads to everything feeling irrelevant or badly paced, but to the contrary, the emotions of our characters, from the opening of Dr. Chase Meridian’s relationship with the Bat-Family, to Huntress’s desire for peace, to the Bat-Family’s suspicion – it’s all delightfully taut like a strung wire.

Max Raynor, though he doesn’t quite attain the smooth dramatic sophistication of Ivan Reis in the first third of the arc, provides appealing, clean-lined, and excellent action pieces, really giving each costumed character their due. Huntress and Nightwing’s movements in their civilian garb mark their strength and grace, while the Batgirls and Batwoman’s attack on the Party Crashers has real kinetic fun in the spooky underground HQ.

Synopsis: The Boy and his dangerous and rich “friend” Elliot eat ice cream at one of the Penguin’s establishments when Jason (Robin #2 in civilian guise) approaches, probing for information. Elliot flashes a huge wad of bills and tells Jason that they kill people for the gangster. Jason reports his findings to Batman, who orders Jason to stay away, as the kids have seen his face, and goes into the Iceberg Lounge as Matches Malone, just as Elliot blackmails the Boy into helping him rob Penguin’s secret office. Batman attacks and the Boy uses Penguin’s escape tunnel to flee, trapping Penguin in with Batman, but Robin confronts him, having knocked Elliot out, and knocks the Boy out too when he tries to shoot Robin. The Boy wakes up, realizing that there has been more than one Robin, and is taken away by the police, screaming about Batman creating an army of boys.

Analysis: Though the connection between the Boy and our Arkham Tower story continues to elude us, the framework of a look at the Bat-Family’s history in Gotham from the perspective of a boy caught in the fringes of life on the streets starts to take shape. Contrasting Dick and Jason and their relationships with Batman is really fun, as well as providing a reason why someone would hate both the heroes and the villains of Gotham. Matthew Rosenberg and Fernando Blanco continue to spin out this dark survey of Batman history with clarity and carefully chosen beats, using the shorter space to really skip from moment to moment without lingering too long – but without leaving the reader breathless. The construction of things like Penguin’s escape hatch is nicely layered in so that it’s not a complete surprise, showing really effective use of timing and scene construction in the writing.

Irvin Rodriguez’s main cover for Detective Comics #1052 shows Batwoman holding a mirror-shiny batarang reflecting her face, another in a series of incredibly lovely digital painted covers for this arc. Jorge Fornes provides another beautiful Mazzucchelli-esque scene of Batman and Robin (Jason) facing a brutal-looking 80s-style street gang as the 1:25 incentive variant. Lee Bermejo paints his usual Batman cardstock variant, this time featuring his version of the Dark Knight posing next to an angular version of the Batmobile just inside the gates of Arkham. The main cover reflects Batwoman’s role in the story, the Fornes incentive cover gestures towards the backup’s setting, and the Bermejo cardstock variant appeals to collectors of his art or fans of digital painting, though Irvin Rodriguez gives more than a run for Bermejo’s money in my view.

Shadows of the Bat reaches its midpoint with the chaos of the opening just about to break loose, as Psycho Pirate and Dr. Wear’s confrontation with the villains they have mind-controlled for weeks looms ever closer, and the Bat-Family closes in. Mariko Tamaki, Max Raynor, Matthew Rosenberg, and Fernando Blanco provide another really excellent package for weekly buyers of Detective Comics this issue.