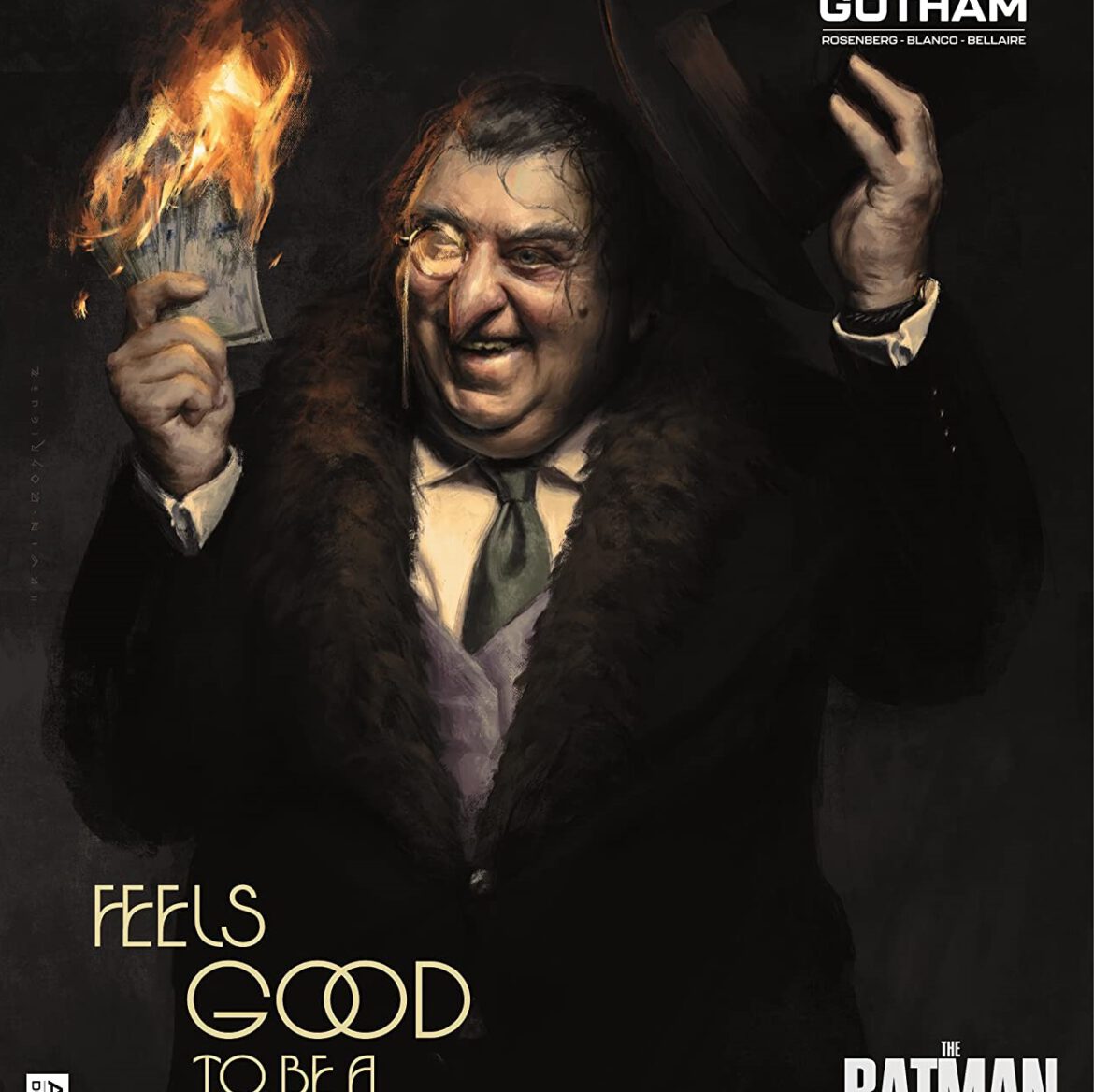 Synopsis: Detective Comics #1053 begins inside a packed Gotham City Courthouse, as a defense attorney is entering a plea of “not guilty” on behalf of a client dressed as Little Bo Peep. Bail is set and via a call to the defense attorney, Dr. Wear agrees to cover bail for all six defendants. Nevertheless, three of the defendants sit on the Courthouse steps and contemplate murdering Dr. Wear.

The scene switches to a conversation between Dr. Wear and Penguin. Dr. Wear complains to Penguin that he is not responsible for the security breach that resulted in the Party Crashers’ arrests.  Penguin reminds Dr. Wear that he is owed money and states that he is happy to extend a loan on his standard terms.

Dr. Wear leaves and is accosted by several Party Crashers armed with a stun gun. They are angry about their arrests, the interference from the Bat-Family, and interruptions in the supply of numb. After threats and electric shocks, they begin walking away. Dr. Wear calls them back by informing them of another problem he has learned about via text message: A disgruntled former employee who witnessed an “incident” plans to go to the press.

A Party Crasher with an ax hides in the witness’ apartment. She avoids the initial assault and flees outside. Batgirl swoops in for the rescue. The witness flees. Later, Batwoman asks Deb Donovan for information about the witness and compares notes in the Cave with Oracle. They discuss the fact that Mayor Nakano is still backing the Arkham Tower project.

Inside the Tower, Nightwing is posing as an orderly as he investigates. He finds Nero XIX in the ICU and listens as Nero murmurs “his hold …” He visits Huntress and tries to help her recollect her movements and actions. She struggles to remember; under the bed, he discovers the phrase “HIS HOLD IS BREAKING” written in blood in Huntress’s handwriting. Back in the Cave, Oracle and Batwoman discuss which rogues might use mind control powers. Batwoman tells Nightwing that she is sending Cass in for backup.

Nightwing makes his way to the top of Arkham Tower as a Party Crasher advances on the Cave via the sewers. Nightwing breaks into Dr. Ocean’s office and finds Psycho-Pirate. Psycho-Pirate freezes him with his powers while the Party Crashers assault the Batgirls in the Cave.

Analysis: Detective Comics #1053 continues writer Mariko Tamaki’s generally stellar run on this title. I am particularly impressed with Tamaki’s insistence on highlighting the detective genre in this book as well as her deft execution. Readers can feel the narrative unfolding thread by thread, and it is both fascinating and exciting as one wonders what reveal or twist is around the next corner. This of course mimics the mystery the Bat-Family is experiencing, especially Nightwing, who is operating inside Arkham Tower.

The connection between the opening scene at the courthouse, the work in the Cave, and the events in the Tower itself, feels seamless. This is quite a feat because the courthouse is a new setting and placing the readers in that setting at the outset could have been jarring or disorienting. In Tamaki’s hands, however, the links are made plain, and despite how much is happening simultaneously, I found it generally easy to track.

The dynamism in artist Max Raynor’s work is especially palpable in the panels featuring Batgirl and Nightwing respectively soaring in space. Ultimately, the pieces of the puzzle are beginning to come together, as the Party Crashers, Penguin, Dr. Wear, and Psycho-Pirate are all converging to create havoc on the inmates inside the Tower. I am excited to see what is around the next corner.

Synopsis: The Boy is playing cards in Arkham Asylum with the rogues, including Clayface and Solomon Grundy. A voice over the loudspeaker announces “Liberation Day,” and the rogues prepare to flee. The Boy indicates that he will stay. He continues to examine his cards until he is quite alone. Bane arrives and indicates his surprise that anyone remains.

Bane tells the Boy that it is time to leave and that Arkham Asylum is really a place to keep “broken things,” but that things that break can heal and be reborn in a stronger form. The Boy tells Bane that he hates Batman, and Bane tells him to go and remake himself. The Boy leaves with a gun but is subsequently disarmed by a guard who is about to shoot him. Zsasz murders the guard and prepares to do the same to the Boy until he is stopped by Bane. Bane instructs them to fight unarmed and takes out Zsasz before he can do lasting harm to the Boy. He instructs the Boy that you can only ever completely lose one fight. If you rise after every defeat you cannot truly lose.

The Boy leaves Arkham Asylum and searches the streets for Elliot until he finds him. He embraces Elliot and asks for help getting out of Gotham.

Analysis: This story in Detective Comics #1053 continues to be a solid backup. The ultimate theme of a boy’s misplaced hatred for Batman does not strike me as especially original or interesting in wider comic universes, but the portrayal of Bane is especially well-done. In particular, the parallels between Bane and the structure of Batman’s origin narrative are obvious but nevertheless well-crafted. Batman too is broken and reforged – the fact that Bane shares this origin narrative is partly what makes him such an interesting and significant rogue.

Detective Comics and Shadows of the Bat continue to shine under Tamaki’s confident writing and pacing.