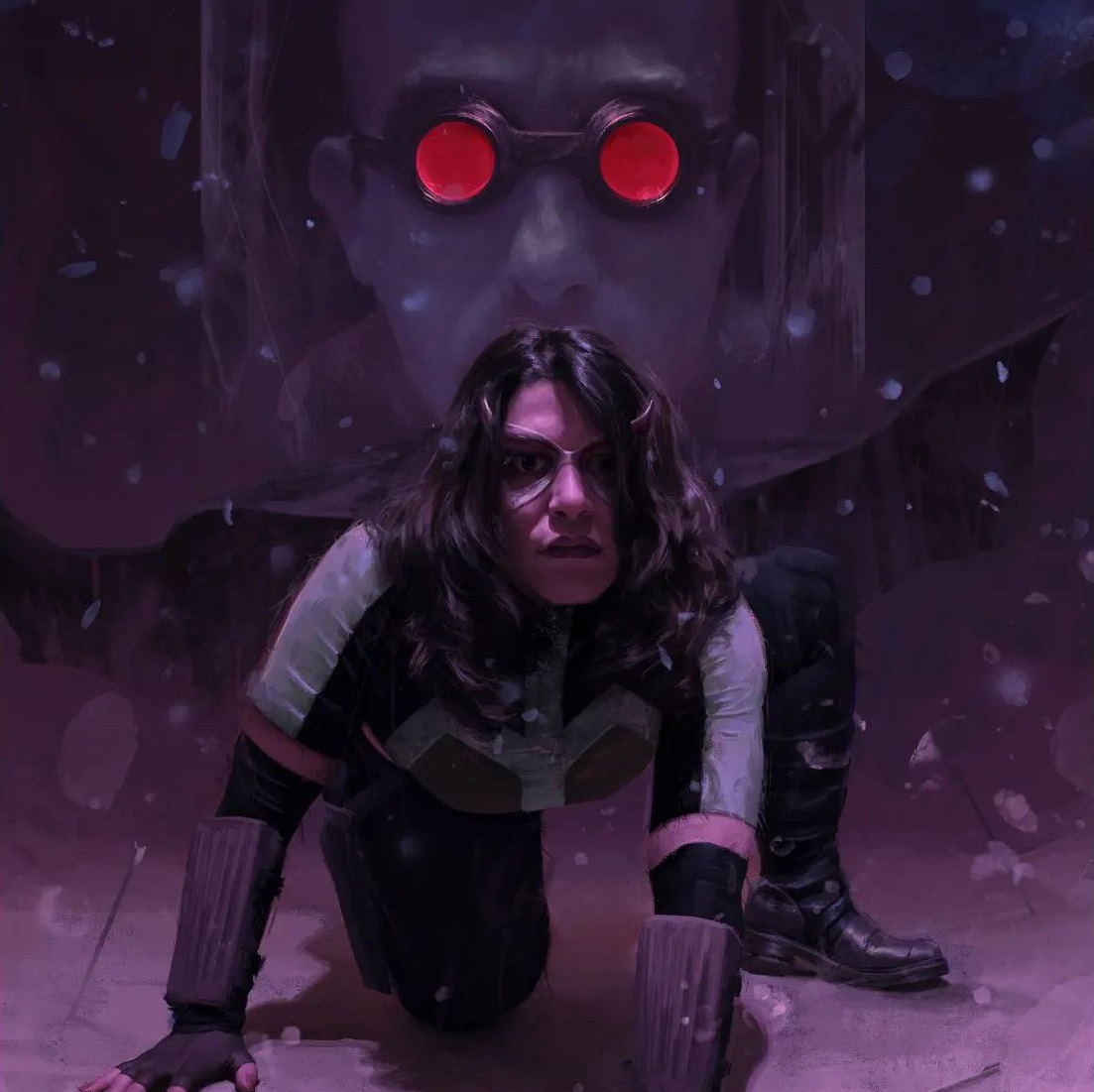 Overview: In Detective Comics #1055, Shadows of the Bat enters its final stretch as the aftermath of the inmates’ seizure of the Arkham Tower and Tobias Wear’s death leads to grave consequences.

Synopsis: Detective Comics #1055 begins and it’s Day 24 as we are reminded of the death of Tobias Wear at the hands of Siphon, Ana Vulsion, and Nero XIX. Outside of the Tower, Kate and Cass are still trying to coordinate with Oracle on getting past the Tower’s security system to get inside to help the trapped Nightwing, Steph, and Huntress. At the scene of Wear’s window toss, the murderous trio is readying themselves for an escape. While they feel that they have the upper hand, Ana Vulsion reminds them of the voice that’s been in their heads all this time. They need to find that voice. Little do they know that the voice in their heads – Psycho Pirate – is unconscious and being carried by Nightwing down an elevator shaft. He intends on keeping Psycho Pirate out of the inmates’ hands.

Ana Vulsion decides they need another ace in their hand. She just needs to find her – the mayor’s wife. Having her as a hostage would definitely give them the upper hand with Mayor Nakano as they press their demands. She flashes back to when she last saw Koyuki Nakano. Ana almost had Koyuki in her grasp until Huntress stopped her. Luckily, the Meager Man was there to take care of the intervening Huntress, tossing her to her demise down an elevator shaft after stabbing her in the side. Little does Ana know that Helena survived and is pulling herself back up the shaft.

Huntress struggles as she gets more violent visions of Ana and the inmates attacking others. As Huntress pulls herself out of the elevator shaft, an iceberg zips by her. It’s Mr. Freeze. As he gives chase, Mr. Freeze demands to know the identity of the person controlling him and the inmates. Freeze grabs Huntress, but before he inflicts any pain on her, Nightwing arrives. As Nightwing confronts Mr. Freeze, Psycho Pirate awakens and gets away. Nightwing attempts to catch him, but he’s kicked by Mr. Freeze, sliding along a sheet of ice until he falls down a hole into the floor. Huntress disposes of Mr. Freeze but is unable to get to Nightwing before he falls down the hole.

Koyuki runs down a dark hall, worried about her husband and herself. As she wonders where to go next. Suddenly, she’s grabbed from behind. Nakano finds herself sitting across from Psycho Pirate. He finds himself sad. He was supposed to keep everyone safe, and he failed. Because he failed, his best friend is dead. Now, they’re all likely to die, and there’s nothing he can do about it.

Nightwing finds himself tied up.

Back in Dr. Wear’s office, Siphon and the Meager Man stand looking out of the broken window. They will get their demands met, and Gotham will pay for what was done to them. A voice is heard behind them as a flash-bomb goes off. Siphon doesn’t have what it takes to lead the uprising. Gotham tried to cure them. But there is no cure… for fear.

It’s time for the Scarecrow’s revenge.

Analysis: Welcome to the present. We have now come full circle from where things kicked off in Detective Comics #1047 back in January. This is a story James Tynion IV would be proud of, considering Tamaki has brought Scarecrow back after Fear State. The reveal in Detective Comics #1055 reveal was phenomenal. We haven’t seen Scarecrow since he was turned over to the Tower in Fear State: Omega, and I didn’t give it any thought that he would play a major part in Shadows of the Bat. Now, however, he is here, and I’m excited to see what his plans for revenge are.

Now that we have come full circle in the event, what can be said about the story Tamaki has told between #1047 and this one is nothing short of genius. She has introduced some new characters and has used the event to develop them into who should become formidable adversaries for Batman in the future. I have been specifically impressed with the development of Ana Vulsion. I could see her being quite the villain against Babs, Kate Kane, or the other Batgirls. Siphon and Nero XIX can grace the pages of any of the other Bat-books.

Tamaki has also done a great job in giving Kate Kane a real good story as she took the lead on things in and out of the Tower. Tamaki (and for that matter, Batman) trusts the character enough for her to be the go-between between Nakano’s office and the rest of the family. Hopefully, DC gives her another look at a solo book. I would have no problem with her sharing those pages with Helena, Deb Donovan, and Chase Meridian.

While Shadows has been a wonderful story, the one weakness – while a weak one – has been the art. It started out absolutely stunning with the great work from Ivan Reis, but the quality of the pencils has gone down. I don’t say this to know the work that Max Raynor and Amancay Nahuelpan, who took over art duties this issue, have put in. Their work is okay. Unfortunately, they had to follow the wonderful work from Dan Mora pre-Shadows and Reis, who handled art duties in the first trimester of the event. Even the wonderful, consistent colors from Jodie Bellaire weren’t enough to make Nahuelpan’s work any better. It’s good to know that Reis will be returning to Detective Comics at some point after Shadows of the Bat ends. If we can’t get Dan Mora back (and we can’t, considering he’s working on Batman/Superman), Reis is a really good replacement. Unfortunately, I can’t say the same for Nahuelpan.

Synopsis: The backup in Detective Comics #1055 begins at the Wayne-Kord Rehab Center, as the Boy struggles with his physical therapy. His therapist insists that he practice with his cane more instead of playing sword-fighting. Suddenly, the building begins to shake violently. It’s an earthquake. As they attempt to get out, a huge bookshelf falls on top of the therapist, killing him. As the survivors get to the roof, they find Gotham damaged beyond recognition. It’s become a no man’s land.

Weeks later, the Boy and a friend are looking for food. They hit an abandoned food store but find it empty. As they head back to the camp, the Boy hands his hungry friend a piece of stale bread. It isn’t much, but it’ll keep her from starving. As they arrived at their camp, they see something is wrong. The camp’s food has been taken by some monster. Poet is not pleased, and he has been taken out his anger on others. The Boy isn’t immune to the backlash. Poet grabs him and tells him he’s going to go find and steal the food that was taken back. The Boy agrees.

That evening, the Boy leads a team of others into the sewers to search for the monster and the stolen food. It doesn’t take long before the monster – Killer Croc – finds them. Some begin to run, but not fast enough as Croc grabs the Boy’s friend. He demands Croc put her down and hits Croc with a steel pipe. The Boy tries to find out why Croc would steal the food. The Boy has another option. Instead of killing him and continuing to have enemies, he could stand with them and have others watch his back.

Back at the camp, the Boy and some of the team return with part of the stolen food. Poet isn’t pleased and takes out his frustration on the Boy after he says he struck a deal with Croc. No deal can be struck that doesn’t include him, Poet says. Little does he know that he is a part of the deal.

Poet hears a growl behind him.

Analysis: There is only one thing that frustrates me with this story. At this point in Detective Comics #1055, you would think that the Boy’s identity would be revealed. Most folks are in agreement that the Boy is Roy Dowd – aka Nero XIX. At this point of the story, going into the final stretch, one would expect all of the major characters to be known by now. For Rosenberg however, this isn’t the case. It’s being strung along. Contrast this with Shadows of the Bat, which revealed Psycho Pirate rather early. Despite the reveal, Tamaki continues to tell a wonderful story.

That being said, the story Rosenberg has told up to now has been great. The journey the Boy has taken from tragic innocent to now – an angry, near ruthless individual, has the making of a Greek tragedy. Everything points to us getting the maniacal Nero XIX. That journey to get to this point has been absolutely sensational. And you can’t complain about the great homages to some of the best events in Batman history. Last week, it was Knightfall. This week, we get No Man’s Land. What can we expect next week?

As we go through the final stretch, Mariko Tamaki has shown she is not letting up on the action and drama of Shadows. We know the big return is happening soon. The only question is how exciting will that return be. (And can we please get the reveal of the Boy's identity?)