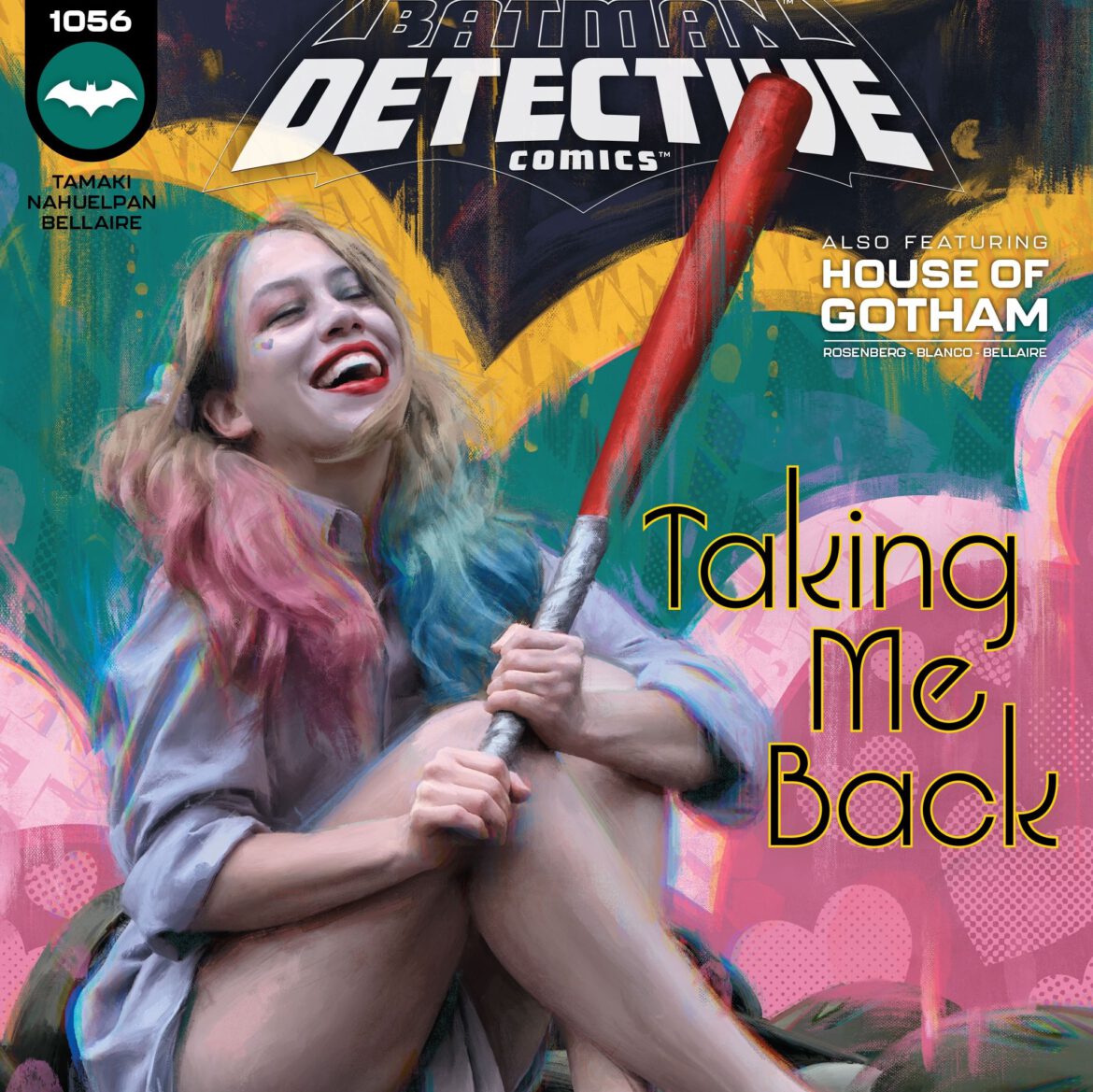 Overview: In Detective Comics #1056, the Bat-Family struggles as tensions continue to build and the hostage situation at Arkham Tower worsens. Can they gain the upper hand?

Synopsis: As Detective Comics #1056 begins, Koyuki Nakano sits with Psycho Pirate, reminiscing about past events. Fear has always been a part of her life. She doesn’t know how to rid herself of it. It’s like poison. Psycho Pirate is in a depressed state as well. He let Tobias Wear talk him into the Arkham Tower scheme and now Wear – his best friend – is dead.

Back on the top floor, Scarecrow, the Meager Man, and the Party Crashers plan their next move. Scarecrow is not worried about Nightwing, who is still affected by the fear toxin. The rest of the Bat-Family, however, are roaming the Tower. Scarecrow instructed the Crashers to find them.

The remaining members of the Bat-Family are scattered throughout the Tower. On the upper floor, Huntress has dispatched Mr. Freeze, using his own gun to freeze him in place. Once down, she realizes that she needs to get the security system down in order for more help to get in. She takes off to find it and any other member of the Bat-Family who might be in there with her. Steph is in one of the subbasements of the Tower. She’s trying to lead the remaining staff and guests to safety. Now if they would only be quiet so as to not draw any attention to themselves.

Elsewhere, Dr. Chase Meridian remains tied up and alone in the infirmary. But she’s not alone anymore as she is joined by the Party Crashers, looking to serve her up to the Scarecrow. Before they deliver her to him, however, they’re going to have a little fun… which is just what Harley Quinn has been looking for. Fake Harley was actually true Harley all along. She uses Dr. Meridian’s phone to call Batwoman. Kate instructs Harley to take down the security system and make sure the doctor remains safe. Before leaving, Harley gives Dr. Meridian a gun.

As Huntress approaches the security room, she’s attacked by the Meager Man. The fight allows Harley to enter the security room without any resistance. Following Oracle’s instructions, she uses her mallet to destroy the security console. The Tower’s security system is down. Oracle sends in the cavalry. In the subbasement, Party Crashers approach Steph and the tower staff. Steph prepares to fight alone, but she is joined Robin (Tim Drake), who begins to take out the Crashers one by one.

Scarecrow looks out of the broken window over the streets of Gotham. The phone rings. It’s Mayor Nakano, wanting to know the demands. The Scarecrow wants nothing, he says. He’s only taking advantage of the situation. He grabs Nightwing and brings the hero to the window and leans him out. Oracle scrambles whoever can respond to the top floor to save Nightwing, but it is too late. Scarecrow drops Nightwing from the window. Batwoman swings in, grabbing the rope wrapped around Nightwing’s body. She has him… until she doesn’t. Nightwing continues to fall…

Koyuki and Psycho Pirate continue their talk. The mayor’s wife wonders when things are going to end, but Psycho Pirate doesn’t. They realize they’re no longer alone. Ana Vulsion stands before them welding a gun. Things are just getting started. The gun goes off.

Analysis: Welcome to March. It’s the final stretch, the final four issues of Shadows of the Bat. What a wonderful way to start the month. I will quote Barbara Gordon: *&^%$#@ hell.

Before getting into what is obviously the best part of this story, if not the entire event, let’s talk about what else happens in the latest chapter found in Detective Comics #1056. After only two issues together,  Koyuki and Psycho Pirate are developing a decent connection between each other. It will be interesting to see how things play out, that is if they survive the ambush from Ana. Tamaki did a great job growing these two as characters. She also left some Easter eggs of possible stories that could come in the future. I would most certainly be interested in a book starring Kate Kane and Chase Meridian. There are a lot of things that could happen between those two if teamed together.

For those who may fear that Tamaki is extending Fear State by bringing Scarecrow back, quell those fears. This is about sheer vengeance against Batman and the Family. We get confirmation of that in the phone conversation between Nakano and the psychopath. Finally, he so brazenly tosses Dick out of the window.

Let’s talk about the most Batman of Batman returns I’ve seen in a while.  It was absolutely ***chef’s kiss***. Considering this is part ten, it was time for the Dark Knight to return home. But I will admit that the first thing I thought about seeing the panel with the Batwing was, “perhaps that’s Damian.” I’m so happy to be wrong.

Last week, I mentioned how I was not a fan of the artwork from Amancay Nahuelpan. There were issues I had with the lines drawn that didn’t look great at all, so much so that not even the great, consistent colors from Jordie Bellaire were enough to save it. Well, what a difference a week did make. The artwork appeared so much better than last week. Credit to the artistic team for recovering from the turmoil of last week. The panel with the returning Batman is a pure thing of beauty.

Synopsis: As the backup in Detective Comics #1056 begins, Gotham continues to live under No Man’s Land. On the Gotham North Side, the boy leads a band of followers through the Gotham waters, looking for food; they find it in a warehouse controlled by the Penguin. As they get their fill of the food, they take more and other supplies into the city and bring them to Leslie Thompkins’ clinic, where she is taking care of the sick and the hungry. As Killer Croc enters carrying a box of goods, Dr. Thompkins tells the boy that Croc isn’t wanted there. If he returns and Croc or any other violent criminal is with him, the doors will be closed to them. As he leaves to search for more food and supplies, his friend Sana tells him there’s a woman who might be able to help him.

Outside of Robinson Park, the poor meets with “Helena,” who tells him that there is a train station Black Mask is using as a warehouse to hide things. Food will be there as well, she tells him. That evening, the Boy and others make their way through the train station. They don’t find any food, but they do find Huntress waiting on them. She isn’t alone either. Batman steps out of the shadows and confronts the Boy on everything he’s been doing. The Boy attacks Batman, blaming him for everything he’s been through, including his life in Arkham and on the streets of Gotham City. He lectures Batman about how those who follow him are those that the people of Gotham have left behind. He steals food and medicine to assist those in need.

Huntress confronts the Boy, but she is stopped. It’s time to go, Batman says. They made a mistake. But before leaving, he tells the Boy that he will not bother him as long as he continues to help the needy and innocent. Once the city recovers, the Boy’s time is done. Batman and Huntress leave the Boy as he falls to his knees in grief.

Analysis: As we continue this trek through Batman history this week, we find ourselves still in No Man’s Land. Yet despite that, Rosenberg continues to do a great job in developing and maturing the Boy here in Detective Comics #1056. He understands responsibility and has used his past to ensure it doesn’t happen to anyone. It makes him an even better leader to those that are following him.

We are in the final stretch of Shadows of the Bat and what an absolutely great way for the Dark Knight to return to Gotham! This issue continues to build the intensity and excitement of this twelve-issue event from Tamaki and team.