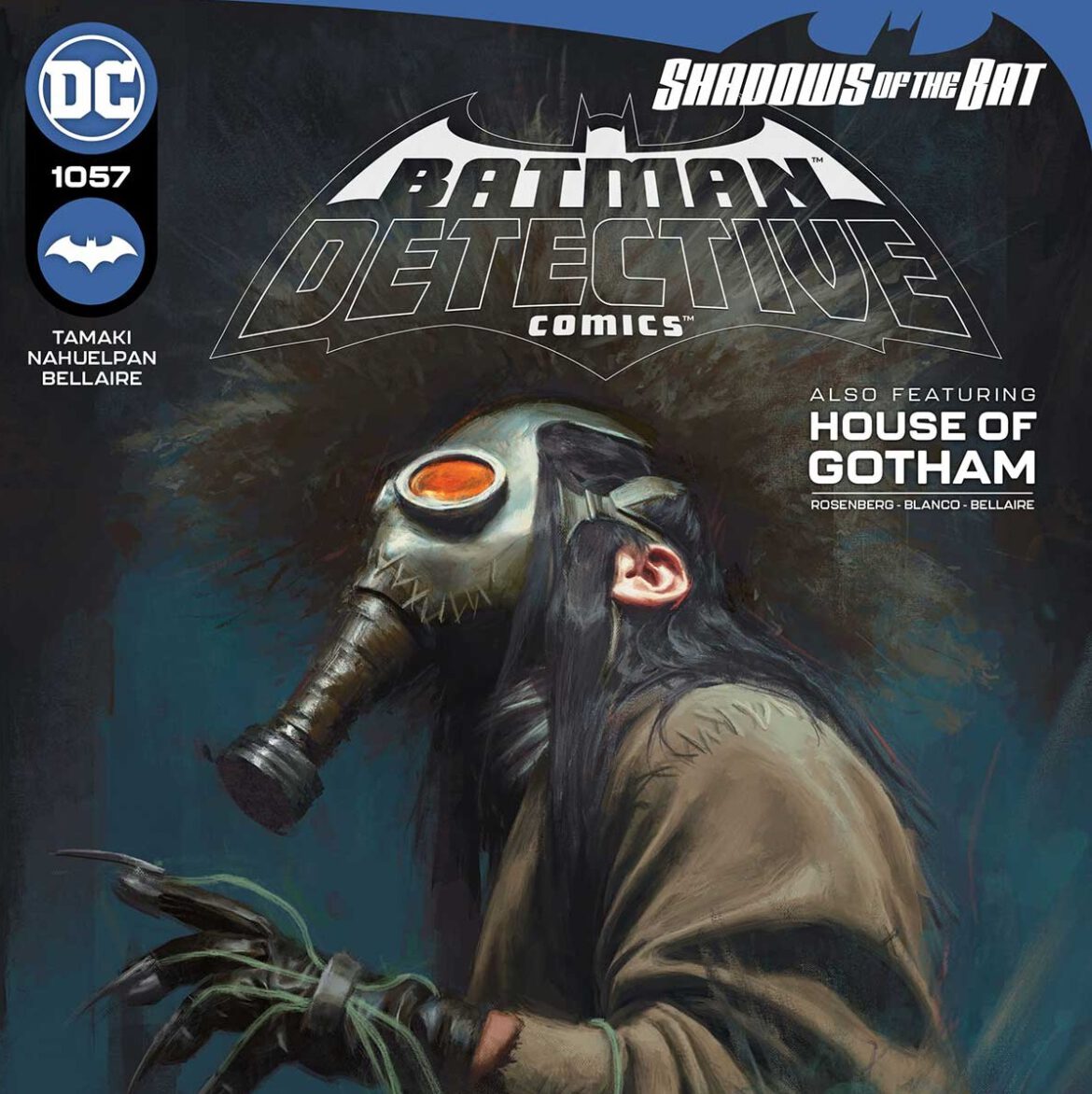 Overview: In Detective Comics #1057, the penultimate issue of Shadows of the Bat finds the Bat-Family facing off against the Scarecrow one final time. In our backup, the Boy comes full circle and lays one final trap for those who changed his life forever.

Synopsis: Detective Comics #1057 starts with the public reacting to Batman’s return, as he coordinates with Oracle and the rest of the Bat-Family on taking back control of Arkham Tower. Batman begins by taking out the Party Crashers. Huntress seems to have found Scarecrow and Ana Vulsion. They have Psycho Pirate and the mayor’s wife, Koyuki Nakano. Huntress is afraid one or both of them are about to be killed. Elsewhere, Tim and Steph are leading the freed staff members to safety when they’re accosted by members of Penguin’s gang. One shoots an electrical weapon, hitting Steph, who jumps to protect everyone from the blast. Tim springs into action, tearing through the gang before Batwoman joins in for the assist. In the pharmacy, there are more Party Crashers, looking to take the stash for themselves. The pharmacy is being guarded by Harley Quinn and a few staff members. One of the crashers shoots a fear toxin bomb at them. They’re saved, however, by Lady Clayface, who sweeps in and absorbs all of the toxin. She disappears after saving the trio.

As Batman clears another floor of the Penguin’s henchmen, he calls in for a status report, trying to find the whereabouts of the Scarecrow. Huntress reports in that he’s in the basement along with Ana Vulsion and the captured Psycho Pirate and Koyuki Nakano. Scarecrow has Pirate’s Medusa Mask. Batman orders everyone to converge. Scarecrow cannot leave the tower with the Medusa Mask.

In the basement of the tower, Scarecrow is gone, leaving the hostages alone with Ana Vulsion. She has a bone to pick with Psycho Pirate. He tried to control her, much like the other men tried to control her. She won’t tolerate men controlling her ever again. As she goes in for the kill, she’s stopped by Huntress. The two foes battle. As they fight, Koyuki frees herself and awakens Psycho Pirate. She implores him to help Huntress neutralize Ana Vulsion. Pirate doesn’t feel he can. He no longer has his mask and is still too weak from holding the patients of the tower in his trance. She urges him to try. It’s time to stop running from their fears.

On the roof, Batman and the rest of the Bat-Family (sans Steph) confront Scarecrow. He’s not going down without a fight. He releases fear toxin on them. As they fight the effects of the toxin, he puts on the Medusa Mask. As the mask is in place, he’s accosted by Psycho Pirate, who is assisted to the roof by Koyuki and Huntress. The distraction is enough for Cass to come and kick the Medusa Mask from Scarecrow’s face. There’s a scramble for the mask as more of Penguin’s men arrive, guns blazing. Batman is able to stop Scarecrow. However, who can get to the Medusa Mask…?

It’s Day 67 of the Arkham Tower project and Koyuki Nakano is in a therapy session with Dr. Chase Meridian. They’re discussing Koyuki’s experience that night. As Psycho Pirate lay unconscious, she saw the Medusa Mask at her feet. She was finally ready to face her fears. She would begin by putting on the Medusa Mask herself.

Analysis: I can’t express how much I enjoyed this part of Shadows of the Bat in Detective Comics #1057. It was filled with a lot of action and some decent surprises. Lady Clayface hasn’t been seen since an earlier part of the event as a patient/inmate in the tower. Yet, she’s in a hero’s role in this chapter, saving Harley and others from fear toxin. I’m still not certain how she survived the event of Tamaki’s first arc, which showed her in the form of Sarah Worth before dissolving in Detective Comics #1038. It is good to see, however, that she is still in a hero’s role as she was in the pages of Gotham City Monsters. From an action standpoint, there was a lot. In fact, I was hoping there would be more, particularly in the final (hopefully final) battle between Batman and Scarecrow. This didn’t happen, and considering how the issue ended, it’s possible we won’t get much fighting in the finale.

Let’s discuss the ending. Koyuki Nakano puts on Psycho Pirate’s Medusa Mask. What can this lead us to in the finale? We know that Mrs. Nakano has developed a connection with Pirate after they have shared thoughts with each other. Does she use the mask against the Family, who are clearly in her sights, to allow Pirate to get away. Does she extract a bit of revenge on Scarecrow? One would hope that Tamaki delivers a swerve in the finale and provides a decent ending. What I hope we don’t get is a lot of off-paneling that leaves the reader guessing as to what has happened. DC is known for doing something like this in the past. I hope it doesn’t happen again, as it would ruin what has been a truly remarkable event.

For some reason, I have enjoyed Amancay Nahuelpan’s art with each part of Shadows that he has drawn. And I’m not saying this because of the colors from Jordie Bellaire (and let me be clear, I love Jordie Bellaire’s colors). However, the more I see the pencil work and inks from Nahuelpan, the more I become a fan. I would have no problem seeing him get more work on any of the Bat-Books on a regular basis.

Synopsis: The backup in Detective Comics #1057 starts on the outskirts of Gotham at the ruined site of the Martha Wayne Home for Boys, a familiar figure in purple arrives answering an invitation. It’s dark at the site. It seems there’s no one there… or is there?

Days later, at the offices of Gotham Light and Power, Batman is investigating an alarm. As he watches security footage, he recognizes a familiar figure, seemingly in purple, walking with an employee. Batman wants to know more about this individual. The next day, high above Gotham Heights, Batman meets Red Hood, who has been keeping an eye on the apartment of Elliot Maslow, the employee from last night. Elliot arrived at a home with a guest. Batman fears the worst, but Red Hood reports that everything is fine. He also tells Batman that he knows Elliot from his days at Ma Gunn’s Crime School. He’s not sure Batman is going to find what he’s looking for.

Minutes later, Batman crashes through Maslow’s window. He promises to protect the man and the family if Maslow just tells him what happened and to give the whereabouts of his guest. Elliot is confused about what Batman is talking about. Batman demands to know why he’s helping the Joker. Maslow tells Batman he’s not protecting the Joker. He’s surprised that Batman doesn’t remember.

Later that night, Batman, Nightwing, Red Hood, and Robin walk through the North Gotham water main, looking for the whereabouts of the Joker. They split up to take a different sewer tunnel. Something doesn’t feel right. As they go deeper, something jams their comms, and they find themselves alone. Killer Croc attacks Red Hood. Clayface goes after Nightwing. Scarecrow takes out Robin with fear toxin. Batman realizes it’s a trap, but it’s too late.

The water rushes in.

Analysis: I truly enjoyed how this chapter in Detective Comics #1057 ended. It’s a climactic scene that will lead us to the finale. Unfortunately, this is kind of where the enjoyment ends. We’re no longer in No Man’s Land and have delved further into Batman’s mythos and yet, the world’s greatest detective seems to be everything but. Could he not put two and two together that the situation was something other than the Joker, particularly after being warned by both Red Hood AND Elliot (yes, that Elliot) Maslow. This chapter seemed very off. However, the ending makes the final chapter seem very promising in bringing things to an end AND revealing the Boy’s true identity.

We have arrived at the end of our journey. It will be interesting to see how Tamaki and Rosenberg bring their individual stories to a close in the final week of the event. With both endings showing promise, I hope that they bring their A-game.