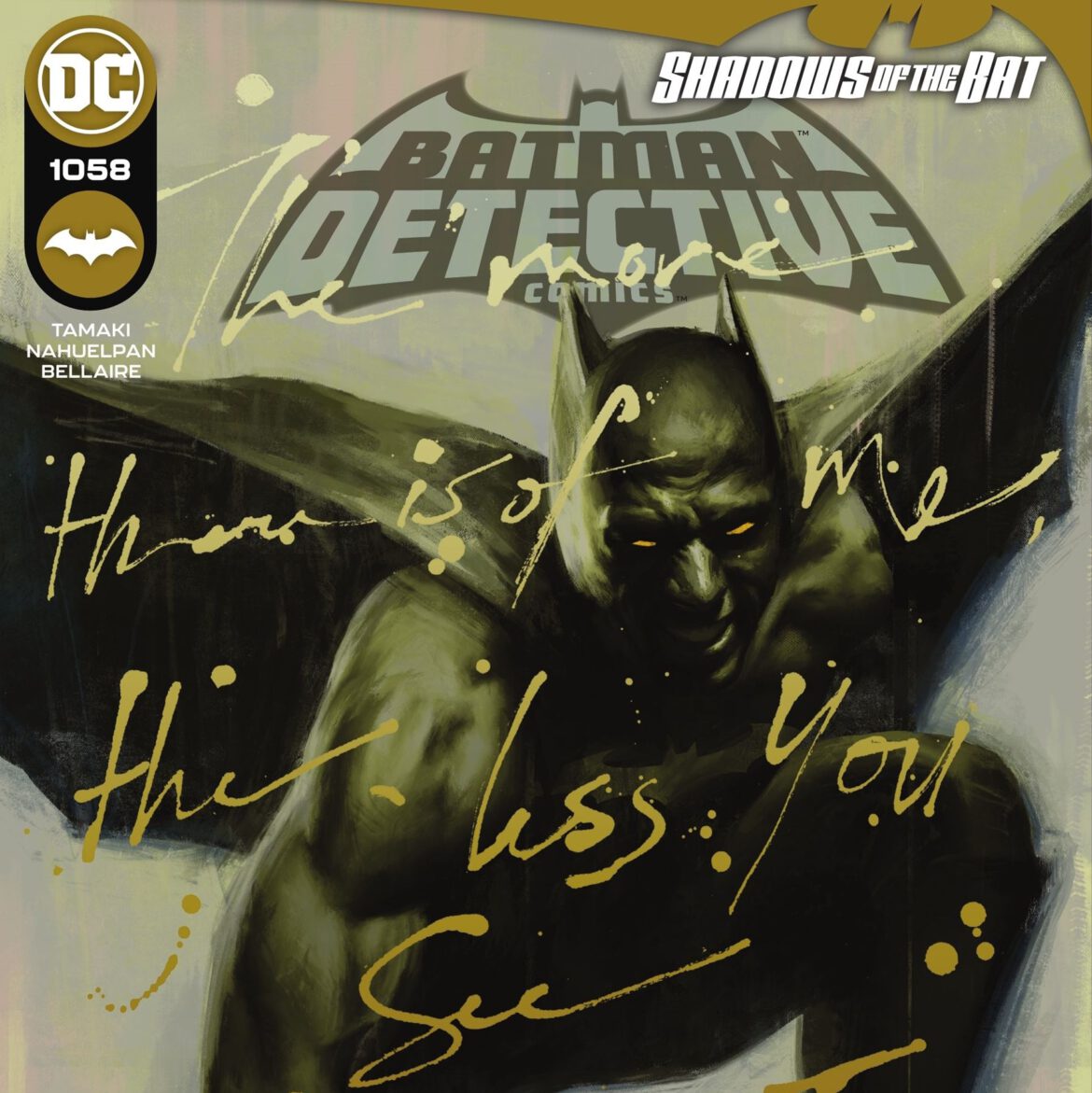 Overview: In Detective Comics #1058, the twelve-week Shadows of the Bat event concludes, delivering the aftermath of the Arkham Tower showdown.

Synopsis: Detective Comics #1058 begins as Deb Donovan sits in her office typing up a story. She finds herself joined by Batman and Batwoman. They relay to her what they can about the scandal at the Arkham Tower. Tobias Wear wasn’t a doctor. He was a con man who stole the identity of a dead physician to pull off his scheme. That scheme was to steal millions from the city while leading a drug trade in which the Penguin and the Party Crashers were his clients. This scheme and his drug hustle would cost him his life. Yet, Batman would not reveal Psycho Pirate’s role in the scheme. But Donovan confirms that there was no medical miracle at the Arkham Tower.

While having dinner, Penguin’s goons inform Penguin that they found the whereabouts of Psycho Pirate. He sends them to the Gotham Sunset Motel to bring Pirate in alive. Penguin’s goons don’t find Psycho Pirate. They do, however, find the Bat-Family waiting on them. As the Bat-Family cleans out the gang members, they report to Oracle inside the new NEW Batcave. Batwoman leaves, stating she is heading to a funeral.

The funeral is for the late Tobias Wear. Not only is Batwoman is in attendance in her Dr. Frow persona but also Deb Donovan. Donovan still tries to pick Dr. Frow’s brain on who was working with the dead conman but is unsuccessful. Donovan does relay that she already knew half the story Batman and Batwoman relayed to her. Also in attendance are Mayor Nakano and Dr. Chase Meridian. At the end of the service, Nakano pulls the doctor to the side. He’s not shutting down the Arkham Tower. In fact, he wants her to run the operation. He should have listened to her the first time in waiting before greenlighting the full project. This time he will listen.

That evening, the Bat-Family members are on patrol looking for Psycho Pirate. He’s located, and Batman swings in on him. Batman offers him a chance to stop hiding. As Batman watches Pirate leave, a familiar voice comes over the Gotham airwaves.

It’s the Riddler, and this is Riddler Radio.

Analysis: Let’s get to what I don’t like about this final chapter found in Detective Comics #1058 of which has overall been a spectacular event. Off-paneling can just kill a comic, and it does it here as well. The last issue ended in such a climatic fashion with Koyuki Nakano donning Psycho Pirate’s Medusa mask. We get no mention of what happens. Does she use it? How does she use it? Where is the mask now? There is way too much that’s been left out to give full closure to the event. That’s truly unfortunate considering how absolutely wonderful Shadows of the Bat has been.

Now, let’s discuss what was enjoyable. As with the other chapters of Shadows of the Bat, the action in this issue was absolutely great. We don’t get a lot. What Tamaki gives us is pretty great as Steph, Cass, and Bruce each had a chance to show off their skill in taking out the Bane-Litos. The takedowns were quick, but they were beautiful. This is only possible due to the stunning work from Amancay Nahuelpan and Jordie Bellaire. I previously said that the quality of art has gone down as we moved through each artist beginning with Ivan Reis and ending with Nahuelpan. While this still has some truth, I cannot express enough how much I love the art in the issue. It’s clearly the best of the four issues Nahuelpan has drawn. And Jordie Bellaire continues to be the best. I can’t say this enough.

What is also a joy is what the aftermath of Shadows can bring to Gotham City. Tamaki’s handling of each character makes me want to see more of them, particularly Huntress and Batwoman. Whether it’s a series of their own or more exposure in the pages of a Bat-book, these two members deserve to be seen more. We as readers deserve it.

Synopsis: The backup in Detective Comics #1058 sees Batman pull himself out of the water and escape the flooded sewer. He finds himself outside of the destroyed Martha Wayne Orphanage. He walks up the steps and finds the Joker tied up. Batman imagines the Joker is playing another one of his games, but he learns that it was actually a trap set up by the Boy. The Boy thanks Batman for honoring his agreement, but this space has allowed the Boy to make his final play to exact revenge on the man responsible for the murder of his parents. Followers attack Batman, giving Scarecrow time to spray Batman with a toxin. Batman passes out.

When he awakens, Batman finds himself tied up like the Joker. The Boy has an ax in his hand. The Joker has ruined so many lives, and Batman has allowed it to happen. No more. Batman frees himself from his bonds, and the kids with the Boy flee in fear. Batman talks the Boy out of killing Joker. He knows that he failed him all these years and vows to be better. The Boy fears he’s about to be returned to Arkham Asylum, but Batman tells him to go find his followers instead. Show the rest of Gotham that he and his people have not been forgotten. Batman leaves.

The Boy walks through the underground water main of the Gotham Reservoir, looking for his followers. Instead, he walks into the Penguin. The Penguin has been looking for him ever since he turned on him those many years ago. The Boy apologizes for leaving Penguin trapped with Batman. He tells the Penguin of his mission to help those who can’t help themselves. The Penguin doesn’t see it this way, however. The Boy doesn’t matter; he never has. This was evident in the fact that through these decades no one he’s encountered has ever cared to know his name. All this time, he has only been a minor character in everyone else’s stories. To prove his point, Penguin kills the Boy, leaving him dead in the sewer.

Analysis: Terrible. Just terrible. After twelve weeks of building a story for the Boy, Matthew Rosenberg’s endgame is to kill him here in Detective Comics #1058. That’s twelve weeks of creating a history of the Boy from a young child. Twelve weeks of building a sympathetic character amongst readers. That’s twelve weeks of integrating a character into the Batman mythos. And the reason for this, you ask? To kill him. This was one hell of a swerve from Rosenberg, but it was completely unnecessary. It completely ruins everything I’ve read over the past three months. I can only imagine what others will think. I’ve read other reviews of the event and know for certain that I’m not the only one who pictured House of Gotham leading us to the character who would be known as Nero XIX, Roy Dowd.

I had issues with how The Tower ended. I hate this one even more. It ruins everything I liked from Rosenberg over the last twelve weeks. Just terrible.

Shadows of the Bat Final Thoughts:

Overall, Shadows of the Bat was a wonderful event that ended slightly flat, particularly with House of Gotham. That ending was just bad. As this twelve-week adventure comes to an end in Detective Comics #1058, I just wanted to lay out some quick thoughts on the event as a whole, not just this issue:

Next month begins a new arc, and Mariko Tamaki will have a co-writer as we get the return of the Riddler in the main story and the return of Gotham Girl in the backup. We also have Ivan Reis returning to the pencils duties. I'm excited for the next phase of the greatness that has been Detective Comics. Just keep Matthew Rosenberg away from it.