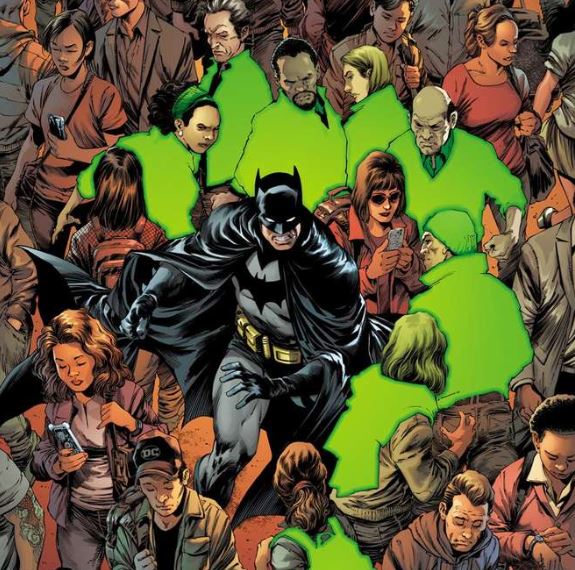 Overview: Detective Comics #1059 kicks off Mariko Tamaki’s final arc on the title, while the backup story returns Gotham Girl back to Gotham City after spending time in Arkham Tower.

Synopsis: Detective Comics #1059 starts with the Riddler’s “Pirate Radio” on the air all over Gotham City. As Gothamites watch and tune in, at the Gotham City Courthouse, Judge Caroline Donovan, Deb Donovan’s daughter, has sentenced Martin Ashen to hard time behind bars. While the judge leaves the bench, the judge gives the convicted felon one final look. As she walks into her chambers, she finds something wrong – a bomb. She runs out, calling for the rest of the courthouse to be cleared.

As the GCPD arrive at the scene, Batman crashes through the window into the judge’s chambers. He deactivates the bomb only to find there’s a second explosive device. There’s no time to disarm it. He wraps it in his cape and heads towards the window, tossing it out as it detonates. Outside the courthouse, EMTs are imploring the judge to go to the hospital. As they prepare to leave, Caroline observes a man walking away. He looks familiar despite wearing a bandana over his face.

At the Gotham Gazette, Deb Donovan receives word of the bomb in her daughter’s chambers. She rushes to the hospital to check on her daughter, but after an exchange of words, Caroline sends her away. As Deb leaves, she bumps into Bruce Wayne. He’s bringing Caroline flowers. Bruce and Caroline connect, as he secretly probes her for information about what happened at the courthouse. Before Bruce leaves, he thanks Caroline for saving lives with her early warning.

Later, at the new, new Batcave, Batman finds security footage implicating Sarah Pet, an internet influencer, with planting the bombs in the judge’s chamber. He finds and confronts Pet, but she quickly confesses to the crime.

There’s a murder scene at the Gotham City Opera House. As Batman investigates the scene, a lethal gas attack hits over at the Bank of Gotham. Batman arrives to assist. While Batman tries to save as many people as he can, he spots someone running from the scene. He gives chase and catches up with the man at the end of an alley.  The man calls himself John Harper. After apologizing for his transgressions, Harper takes a gun and kills himself in front of Batman.

As Batman studies the events of the day, another Riddler episode appears on the screen. He, too, has been paying attention to the events over the past 24 hours. Batman knows his long-time foe has something to do with it.

Back at the hospital, Caroline gets a call from “Chase.” She tells “Chase” to never call her again. She did what they asked. But no one was supposed to be hurt.

Analysis: Despite a great story from Mariko Tamaki to kick off the aftermath of the Shadows of the Bat event here in Detective Comics #1059, I have one big problem with this story – it’s coming to an end. And I don’t mean the ending of Tamaki’s run on Detective, although that’s a major thing for me. But knowing Tamaki’s last issue is in June, that means this final arc has to be done in two more issues. In this first issue of the arc, we already seem to see Tamaki rush to push things into the story. Three events jammed into the story. However, only one had some depth fleshed out. Granted, this is the story involving Deb Donovan’s daughter. While it’s understandable considering Deb Donovan has been an integral character in Tamaki’s run on Detective Comics, this is supposed to be a Riddler story. However, we get very little of him other than the beginning and the end of part one. Considering we only have two more issues in the arc, while I hope we won’t see more of this, something tells me it will. And that’s unfortunate, considering how great Tamaki’s run on the series has been.

It’s also good to see Ivan Reis back in the pages of Detective Comics. His pencils continue to be impeccable. In Detective Comics #1059, Brad Anderson is providing colors. I had to check to be sure because the colors of this issue gave me Jodie Bellaire vibes. That’s a credit to the style of work they both do.

Synopsis: Gotham Girl confronts a shady businessman named Brian Kimura as his bodyguards pointlessly attack her since a mysterious website calling itself “Gotham Girl” pointed her to him. She leaves through the roof, then tries to figure things out in various lonely places around the city. The website popped up not long after they released Claire from Arkham Tower. Claire does not feel comfortable going to the Bat-Family. At Gotham High, where Claire is trying to connect to people and use theater department resources to make costumes, she meets with her friend and former Arkham Tower member Andre, who encourages her to go to the required meetings (though Claire has violent fantasies of using her powers to lash out). Later, after breaking a lot of stuff with her powers, she decides to go to a meeting anyway but finds Andre dead by himself.

Analysis: So, I had to read this story a few times before I truly had a sense of how I truly felt. After the first read, there was no doubt that it wasn’t for me. After speaking with some of the folks over at TBU, I decided to give this story an honest re-read (actually two re-reads). I now have a better feeling for my thoughts, so bear with me as I play this out.

Gotham Girl’s return to Gotham is just ok. Part of the reason I’m having a hard time grasping the story Sina Grace is attempting to tell leans towards the fact that before up to now, the only voice we’ve received for Claire Clover since her introduction into the Batman Universe has been the voice written by Tom King. So, after years of absence from Batman (and the first in Detective Comics), this dialogue, which consists primarily of Claire talking to herself, just seems a little off and something I will need to get used to.

Let’s be clear. I am still not a fan of David Lapham’s art. It was a breath of fresh air with the art we received during the weeks of Shadows of the Bat. His linework looks sloppy and the colors from Trish Mulvihill don’t help.

Once again, a backup story negatively affects the final rating of the overall issue. I'm not certain the point of them anymore, especially considering these stories have nothing to do with the main story. I continue to look forward to reading whatever Mariko Tamaki put out in Detective Comics. But unfortunately, the backup stories as of late continue to disappoint.