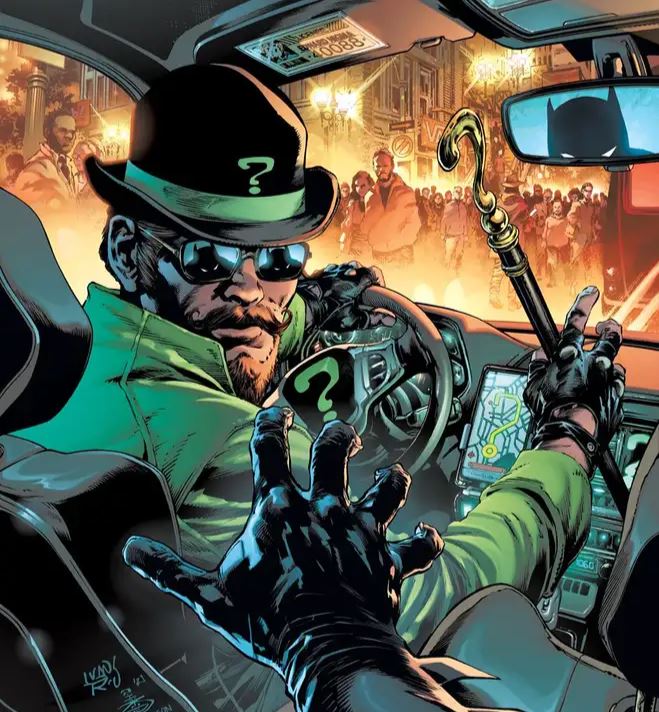 Overview: In Detective Comics #1060, Batman continues to connect the Riddler’s reappearance in Gotham to the city’s recent criminal activity. Gotham Girl struggles to find herself in the backup while also searching for a murderer.

Synopsis: As Detective Comics #1060 begins, Bruce Wayne and Judge Caroline Donovan enjoy dinner at Trattoria Gotham, speaking about the antics of Deb Donovan. Bruce probes the judge to find more about the recent criminal activity in Gotham and why citizens with seemingly no past criminal records are committing atrocities only to admit to their wrongs quickly. The judge, however, speaks about her own ambition in making a change in the city. She quickly learned that despite her actions to make a change, there is more injustice in the Gotham than there is justice. Bruce reminds her that even one change makes all the difference. Bruce walks the judge home, and as she closes her door, Batman goes to work; Riddler is broadcasting live again, speaking of the Citizen Criminals of Gotham.

As Batman looks over gathered evidence, trying to connect the dots and determine whether or not Caroline Donovan is involved, he gets a call from Batwoman. There’s an S.O.S. at the Gotham Gazette, and Deb Donovan is there alone. Batman makes his way to the Gazette, where, after startling Deb half to death, he looks over the evidence that she gathered on John Harper, the man who gassed the bank in the last issue. As Deb leaves, Batman does a scan for evidence. He finds a hair. As he analyzes things back at the Batcave, Oracles calls in and gives him more backstory – this time on a possible connection to the Donovan family. The analysis of the hair is complete; it belongs to Darby Turner. Batman knows where his next stop is. As he heads out, Caroline Donovan is walking home from work. She finds an envelope taped to it as she walks up to her door. It has the number six on it.

Talia al Ghul is reading when she realizes that she is not alone. Batman is looking for the whereabouts of Darby Turner. Talia responds that she hasn’t seen the suspect since she returned from out of town. However, she warns Batman that he needs to pay mind to what the Riddler is saying. All of the messages he’s been pushing are directed at him. The Riddler is playing games again.

Back at the Gazette, Deb is meeting with Ms. Smith, who claims to have information on the Citizen Criminals. They go to talk in private. Minutes later calls come in of a hostage situation. Ms. Smith, who turns out to be Darby Turner, has Deb Donovan on the roof with a gun to her head. She claims to have the building rigged to blow if every member of the justice system doesn’t air their secrets to the world. Batman arrives and disarms Turner right as her boyfriend arrives. The boyfriend tells Batman that he will tell him everything about what’s going on. Darby begs him not to say anything, but he tells her that he needs to, as the blackmailing will never stop. Darby finds her own way of making things stop by jumping from the roof. Batman jumps as well, catching the jumper before she could fall to her death.

On the ground, Perry, Darby’s boyfriend, runs out. As he begins to tell Batman everything, a shot is fired, and he falls to the ground. The gunman – Caroline Donovan – points the gun at Batman. She doesn’t want to kill him either.

Analysis: I have one real issue with this story in Detective Comics #1060. It’s being rushed to the end. I really feel that this story could be much more enjoyable than its current form if it were just allowed to be fleshed out. With only one issue remaining in Mariko Tamaki’s run, this won’t be allowed to happen. And that is unfortunate as there are a few things I really wouldn’t mind seeing Tamaki expand on.

It’s safe to say that there is no future for Bruce Wayne and Caroline Donovan. However, what did catch me off guard as I got to the panel was the appearance of Talia al Ghul. She has been around a lot in the Batman universe over the past few months. First, she has a very active role in Joshua Williamson’s Shadow War as a central figure. Even before that, she had a role in the pages of Robin. With Batman and Detective Comics, things are a little more direct with Bruce. In Batman, Talia and Bruce kiss. In this issue of Detective Comics, they’re comfortable enough where Talia is ok walking around in a nightie with no problem. She also has no problem being seductive with him (to relieve stress). To be clear, I am Bat/Cat all the way. However, the relationship between Bruce and Talia has always been an interesting one, and that was before the birth of Damian Wayne. I would love to see Tamaki explore that in the future. She gives such great voices to the characters she writes.

To those who say this is a Riddler story, we see very little of him. Of course, there are references to him, but he’s only seen on two pages. While I expect this not to be the case as things are closed out next issue, I would have preferred to see more of the central villain in the arc. This is another problem with this arc only going to three issues.

Ivan Reis’ art is such a joy to see. There’s not much more to say about it. Whether it’s the work done here in Detective Comics #1060 or in his time during “Shadows of the Bat,” Reis’ art has been a great replacement for the pencils from Dan Mora. I will miss his work.

Synopsis: As the backup in Detective Comics #1060 begins, Claire calls the police to report Andre’s death. As the police question Claire, Dr. Chase Meridian and Dr. Rea from Arkham Tower arrive and save Claire from further questioning. They don’t know that Claire has Andre’s laptop. As Claire tries to break through the laptop’s encryption, gunmen attack her. Apparently, the Gotham Girl website has put out some damaging information on Paul Perlman, and he wants revenge. Claire, however, uses her powers to get control of the situation. She gives the gunmen an option; help with the laptop or go to the hospital. They’re able to break into the computer, where they find some interesting stuff.

The next day, Gotham Girl is at the Arkham Tower. She doesn’t need any help; she’s just looking for a murderer. She makes her way to the top floor, to the office of Dr. Meridian. That murderer is not going to get away with it.

Analysis: Despite starting off slowly, this story actually ended quite well. I found the interaction between Claire and the gunmen and how things ended at the Tower really funny, and I am interested in seeing how this story is brought to a close. Fortunately, the final part also means the last of David Lapham’s art. I’m sorry (not sorry), but I am not a fan and don’t think I can ever be one.

As we come closer to the end of Mariko Tamaki's run on Detective Comics, I can't help but think that there was more to the story she wanted to tell. It's unfortunate we won't get it.