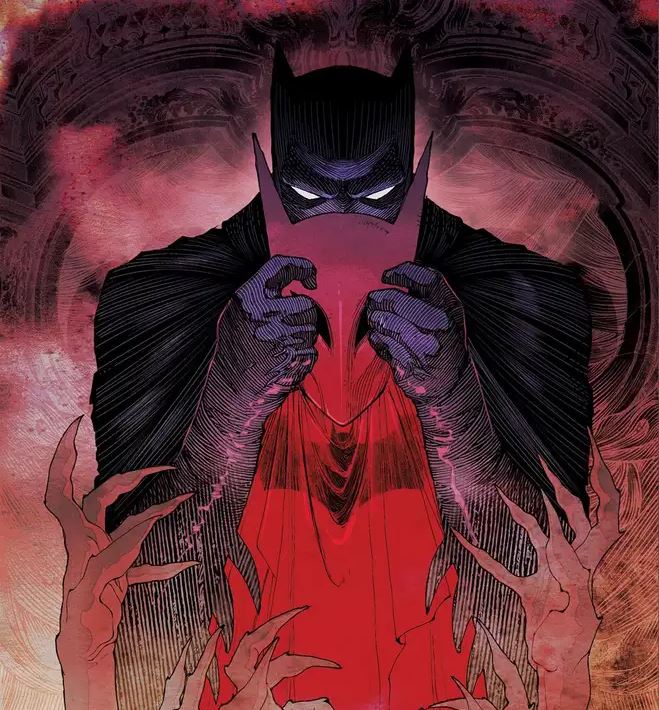 Overview: In Detective Comics #1062, DC Comics begins a new era under the new creative team of Ram V and Rafael Albuquerque with a Jim Gordon backup story from Si Spurrier.

Synopsis: As Detective Comics #1062 begins, an opera goes on at a Gotham theater. As attendees watch in astonishment and horror, one guest is apparently missing. Where is Bruce Wayne? He’s at the Eastside Dockyard as Batman, watching over a smuggling ring. With the numbers, he feels he can take them down in eighteen seconds. He springs into action, but unfortunately, he misses his mark. He disposes of the smugglers in twenty-two seconds.

Suddenly, there’s a mysterious sound. Batman turns and finds Bruno Maroni, Sal’s nephew, approaching him, talking in an unknown language. Batman realizes something is wrong as “Bruno” changes into something far worse – a giant brute with Batman in his sights. Batman does his best to take on the giant monster, but he can’t get the upper hand. The monster goes in for a killing blow, but it is shot in the head by an arrow and falls to the ground.

Batman gives chase to his savior to find that it’s none other than Talia al Ghul. He criticizes her for taking the life of another. She informs her beloved that what he faced was not human and was far from dead. Suddenly, the monster rises to the roof where Batman and Talia are speaking. As Talia turns to leave, she warns Batman that something is coming, and his old rules have him unprepared to tackle it. As she leaves, the monster falls and dissolves into ash.

Back at the garage underneath his Brownstone, Bruce is running a series of tests on himself. Everything appears normal, but he still feels like something is off. As he runs on a treadmill, Nightwing checks in on his mentor to find out about the night’s events and why Bruce is running all of these tests on himself. Something’s off. The events of tonight prove it. He needs to find out what’s wrong and fix it. They discuss the antiques that the smugglers were trying to bring in, including a box that Bruce can’t figure out.

Arzen meets with his mother, who has come to see him off on his trip to Gotham. Their legacy depends on his success and, despite his objections, she has assigned others to accompany him to the city. She’s also sent another, Gael, to Gotham before him to prepare for his arrival. Gael is speaking with the men who were at the dockyard about their failure to deliver on their end with the antiques they were smuggling. They attempt to explain how things work in Gotham, but Gael hears none of it. He kills the men. Outside cloaked goons kill the other smugglers who are waiting outside. Gael tells them to leave no trace of their presence.

Back at the garage, Bruce is dreaming. He dreams of the demon Barbatos, who tells him to wake up and listen. As he wakes, Bruce realizes that the box he was observing is now playing music. It’s a music box.

Analysis: I miss Mariko Tamaki, but I welcome Ram V to the world of Detective Comics. Right off the bat (pun intended), I will admit that I wasn’t sure what to expect as the new creative team took over; I’m still not. As Detective Comics #1062 kicks off, I’m still wondering where we’re going, but there are certain things I’m quite clear on. First, I am NOT a fan of the Barbatos angle at all. I was never a fan, and Scott Snyder’s use of Barbatos during the Heavy Metal run didn’t make it any better. For whatever Ram V has planned during this arc, I sincerely hope that Barbatos is short-lived.

I was pleased with the action we did receive in this first issue of the arc and was pleasantly surprised to see that Talia is still hanging around Gotham after Shadow War. I’m still of the sense that after everything coming about with Batman vs. Robin (again) that DC wants to have the parents of Damian Wayne as a couple again, somehow. While I don’t see it happening soon, I feel it’s coming. The action in this issue leaves a lot to look forward to as Bruce has to deal with the demons that seemingly hold him back while dealing with the threat that Talia says is coming. I am interested in seeing where Ram V takes us with this.

I might get ripped for saying this, but Rafael Albuquerque has never been my favorite Batman artist. His style of pencils doesn’t fit what I like to see in the Dark Knight. This story, much like it was in All-Star Batman (which was not a great story, but is a different topic for a different day), fits the tone and theme Ram V is attempting to portray. There’s something dark and sinister going on. Albuquerque’s pencils, along with the colors from Dave Stewart, truly highlight that.

Synopsis: The backup in Detective Comics #1062 sees Jim Gordon return to the dilapidated site of the former Arkham Asylum. He’s on a job. It’s not the job that he wants, but considering everyone has been avoiding him since he’s returned to Gotham, it was the best he could get. He needs to find someone. Jonas Redding, the son of Annie Redding, has gone missing, and she needs help. Jonas is troubled and hangs with the wrong crowd. His mother loves him and wants him back home. Her tips lead Jim Gordon to the old Arkham site. There, he finds several dead bodies, but he also hears someone else moving. He calls for the person to identify himself before he is swiftly struck down. As he picks himself up, Jim calls out for Jonas. The person responds that Jonas isn’t his name.

Analysis: Welcome back to Gotham, Jim Gordon. Unfortunately, the city has moved on without you. Spurrier’s story has a lot of promise, but it suffers from one clear matter – it’s a backup story that will appear in three parts. With only about ten pages to a backup story, it’s going to be tough to flesh out everything that’s going on. What makes it worse, unfortunately, is the art from Dani. Given the theme of the story, I understand the art style and the selection of Dani to pencil the story. However, I am no fan at all. The dislike is similar to that of David Lapham during his backup stories. That is not a good sign for this story.

A decent start to a new run by Ram V, but I have little interest in any long-term involvement by Barbatos. I sincerely hope it is short-lived.