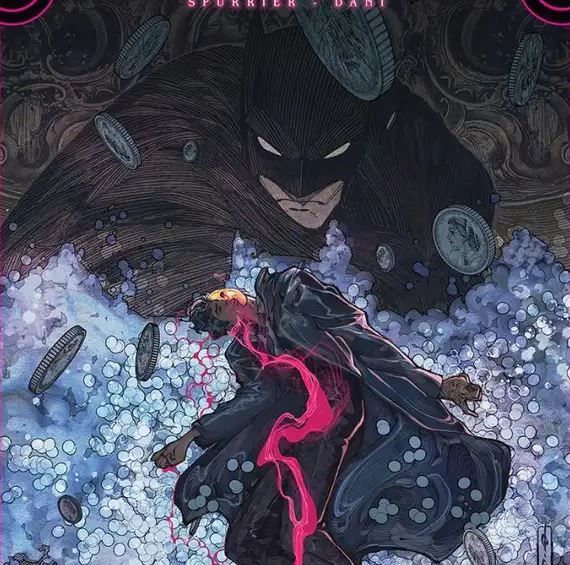 Overview: In Detective Comics #1063, Bruce Wayne continues to search for the link between the changes occurring in Gotham and within him. In the backup story, Jim Gordon continues his search for a missing woman’s son.

Synopsis: Detective Comics #1063 begins at Club Bhairax, as Harvey Dent sits alone listening to a performance. He’s eventually joined by Bruce Wayne, who’s seeking his help. Harvey tells Bruce that he’s no longer in the life. Two-Face is no more. Bruce tells Harvey about the changes he’s been seeing in the city and how his normal techniques haven’t worked. Harvey confirms Bruce’s fears that the city is changing, but he also questions whether his old friend can keep up. At one point in time, he used to own Gotham.

Off the shores of Gotham, the Royal Sunskipper carries Arzen and his entourage closer to the city. Shavhod tells her young master about his family’s history in Gotham. She reveals that once in the city, his ancestor changed his name from Orgham to Arkham. The name would follow the family within Gotham to this day. With the destruction of the asylum that bore the family’s new name, it was time to reclaim what was theirs, lest they would look weak to others. This infuriates the young prince, and he begins to transform into a monstrous figure. He’s calmed by Neang, who’s playing music from a music box similar to the one seen in Detective Comics #1062.

Batman pays a visit to the low-security wing of Blackgate Prison. He’s there to speak with Payne Cardine, aka The Maestro. Batman shows Payne the music box retrieved from the smugglers. The Maestro opens it, allowing the music to play. He reveals to Batman that there are hidden tones in the harmonics, well below the typical frequencies. It’s called Black Noise, and it’s rumored to have the ability to change people. The Maestro returns the box to Batman and returns to playing his piano.

Batman leaves Blackgate with the words from Cardine lingering in his head. He becomes ill and falls to the ground. It’s Barbatos again.

Back at the club, Harvey is leaving for the evening. As he heads up an alley, he bumps into someone. It’s Gael. Gael is surprised to hear Harvey Dent apologize to anyone. Gael slaps Harvey to the ground. He was hoping to meet the old Harvey Dent, not the husk of the man that Dent used to be. Gael takes out a vial, breaks it, and blows the misty powder into Harvey’s face, sending him back to the ground in pain. Gael will know what Harvey knows. He will do what the Azmer demands, or he will die.

As Harvey lies on the ground, succumbing to the effects of the Azmer, he hears a voice…”You need me, Harvey. That thing they put in you is tethered to you only, not to me. Give me control again.” Two-Face is back?

Analysis: Upon scrolling the pages and immediately seeing Barbatos again, I immediately frowned, thinking that Ram V’s story would be going in the wrong direction. I should have known not to question Ram V because, despite my distaste for the one character, this actually turned out to be a decent issue. A few things seem to be answered, or at least one glaring one – timeline. From the conversation Bruce has with Harvey, it appears Oswald Cobblepot is still alive, meaning Ram V’s story takes place before Zdasky’s timeline in the current Batman run. I truly appreciate when readers can link things together and know where a story might fall within continuity, and we get that here.

Ram V seems to be bringing Bruce through the wringer, and I don’t mean with the appearance of Barbatos. We’ve seen writers in the past question whether Batman’s tactics work in today’s Gotham, and early in his run, Ram V seems to be doing the same thing. In the last issue, it was Talia calling Batman’s methods too old for this new Gotham. In Detective Comics #1063, Batman is told the same by Harvey Dent. While I don’t ever see Batman changing who he is, I also don’t have an issue with writers bringing him close to that line. It frankly keeps the character from going stale.

Speaking of Harvey, it was good to see Ram V explore the relationship between these old-time friends. I was hoping we would get more of this in upcoming issues. However, seeing how the story ended, I don’t believe that’ll be happening. It was fun while it (briefly) lasted.

My views on Rafael Albuquerque’s art haven’t changed with this issue. It is what it is and fits the story for what it is. I ultimately hope that as this arc ends, a new artist comes aboard.

On its own, this story is possibly a rating of four (definitely a four, with a better artist). Unfortunately, it suffers from a bad backup that brings the overall issue down. DC needs to put a stop to this.

Story #2: “The Coda” Part 2 written by Si Spurrier with are by Dani

Synopsis: The backup in Detective Comics #1063 sees Jim Gordon continue to try to reason with the person he met in the last issue, but Jim quickly realizes he’s been used. Laser sights have been closing in on the kid. As Gordon jumps to push the kid out of the way, he’s hit with a tranquilizer dart. Cops in riot gear rush in. Gordon awakens to find himself outside. The goons who attacked him and the guy are unclothed and unconscious around him. Could one person be responsible for this?

After calling Harvey Bullock, Jim realizes it’s Jim Jr.’s birthday. At the cemetery, he meets up with the kid from the destroyed asylum. There’s no comfort in their conversation, and the boy leaves, leaving Jim Gordon with as many unanswered questions as before…

However, Jim does find a few things when he makes it to Harvey Bullock’s PI office. He finds out that Bullock had met with Annie Redding about her missing son as well. With the information in Bullock’s files, the former police commissioner finds himself looking at the mom sitting alone outside of a shelter. A police car pulls up, and the passenger door opens to reveal Jonas Redding has been found. Det. Urquhart (the cop from the last issue) walks the two inside the shelter, where he immediately shuts the door and padlocks the family in. A demolition notice is placed on the door.

Analysis: In the previous issue, I held a keen interest in seeing where Spurrier would be taking Jim Gordon. Now, I’m not quite certain that is still the case. As I mentioned in the previous review, this story suffers from being so short in context (page count) and in content (only one more part remaining). That’s unfortunate. It’s the problem with having back-ups that don’t truly tie in with anything else. An editor’s note highlight that the story occurs before The Joker #15, but the lack of context leaves one wondering if the reader hasn’t picked up The Joker (as is the case with me). The art also continues to be a weak point as well.

I was hoping Ram V would pick up the pace a bit. However, I enjoy him highlighting the long relationship between Bruce and Harvey. It looks like Two-Face will be returning sooner rather than later. I still can do without Barbatos though.