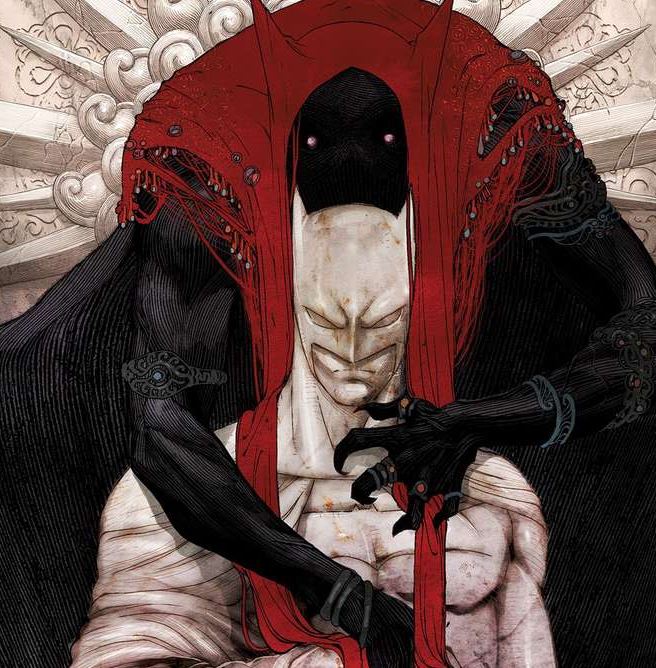 Overview: Ram V’s Gotham Nocturne arc continues in Detective Comics #1064 with the arrival of Prince Arzen to Gotham’s shores. In the backup, readers are treated to a surprising twist to the conclusion of Si Spurrier’s Jim Gordon story.

Synopsis: Detective Comics #1064 begins years ago as Talia al Ghul trains her son, Damian Wayne, in sword-fighting. The young heir to the Demon’s head, however, wants to hear the story of Farhad, the Grim Soldier. The young mother obliges and tells the story of the man whose devotion to his gods, who put a demon beast inside of him, cost him the love of his life.

In the present, Bruce Wayne visits a doctor at Gotham City General Hospital. The doctor is astonished by the level of injuries to Bruce’s body. While he sees Bruce is in otherwise excellent health, he feels the former billionaire is suffering from panic attacks. Little does the doctor know that he’s alone. Bruce has made his way to another part of the hospital, where, wearing a ski mask, he pays a visit to Lewis, one of the goons he took down at the Gotham docks. He wants to know more about who paid him. After roughing Lewis up some, the thug gives Batman the information he was seeking. Batman knows exactly who was running things.

Batman arrives at the abandoned Pennyman Theater, where he finds Talia al Ghul waiting on him. She knows he would figure things out but hoped he wouldn’t have shown up. The two begin to fight, and before long, Batman realizes that Talia is trying to distract him. He just doesn’t know for what. Talia sets off an explosive, causing Batman to fall through the floor. Talia leaves as the remainder of the abandoned building collapses to the ground.

At the Gotham Harbor, the media is abuzz about the arrival of Prince Arzen as he comes as an emissary of his mother. The mayor and the police commissioner are all in attendance for the pageantry. Little do they know that they are not the only ones awaiting the arrival of Prince Orgham. The League of Assassins is also awaiting the yacht to arrive. The League, however, doesn’t know that Gael is expecting them. He informs his colleagues to let the attack happen; just ensure the prince is protected.

Back at the destroyed Pennyman Theater, a grapnel gun rises from the rubble, pulling the Dark Knight from the ashes.

Analysis: After three issues, the build in Ram V’s story has been slow, very slow. This isn’t to say that things haven’t been interesting, but at this point in Detective Comics #1064, I am personally waiting for the story to move along. At least a quarter of the pages in the main story either could have been slimmed down or completely avoided for something more interesting to move the story along. What’s the purpose of the doctor’s visit and the x-rays? Farhad’s story could have told the same story in far fewer pages. I am sure there’s a reason for it, but at a minimum, we don’t need to talk about Bruce’s broken body to do so. The slow build is why my rating for the issue (and the arc) isn’t as high as it could be.

All is not lost, however, or at least not for one who hopes, considering the last panel of the story. Hopefully, the action kicks up more. There is still promise in the story arc, and I am here to see how things end. The slow build can only go so far.

Unfortunately, the same can’t be said of the art. As mentioned in my previous reviews of the arc, I am not a fan of Albuquerque’s style in the pages of Detective. The pencils already give it a style I am no fan of. The thick, heavy inks do not make it better. My dislike of the art doesn’t stop with Rafael Albuquerque. It extends to the covers. The main cover and the variants do not look good at all. I understand the styles with what Ram V is looking for. But unfortunately, the overall art in Detective Comics does nothing for me. But that’s just me.

Synopsis: The backup in Detective Comics #1064 begins outside of the condemned shelter as Jim Gordon confronts Detective Urquhart. Gordon sees the wrecking ball getting closer to the building. He also sees the demonic eyes looking from the unmarked car across the street. Urquhart tells the old police commissioner that no one will miss the riffraff trapped inside because there’s a new Gotham on the horizon. They’re not a part of the plans. The boy trapped at Arkham isn’t important either. He’s nothing but a thief. All Gordon needed to do was to get the three of them to the building to be taken care of. Instead, Jim Gordon arrived alone.

Suddenly, the detective’s eyes change, and he begins speaking in a different language – the language of those possessed by the Azmer. He attacks and overcomes the old police commissioner. Before he’s able to do too much harm, the boy from Arkham arrives. He realizes there’s something dark within Urquhart. The tattoo on his back begins to glow, and he attacks the possessed police detective. Gordon wants him alive to get answers, but it is of no use. Urquhart dies as the Azmer leaves his body.

The shelter occupants begin to come out of hiding. They’re scared, but they have hope in their eyes. Jim Gordon looks at his savior, and he makes a promise to help him find out who he really is and how he ended up in the walls of Arkham Asylum.

Analysis: Kudos, major kudos to DC. You got me. For the past few months, I have complained about the lack of connection with the main story of Detective Comics and its backup story, especially considering the lengths we got during Mariko Tamaki’s run on the title and what is currently going on in Chip Zdarsky’s run on Batman. After much complaining, Spurrier pulled a fast one on me here in Detective Comics #1064. I’m ok with that for one obvious reason – that Jim Gordon could be united with his friend Batman sometime soon. Bat-Fans everywhere should be happy about this.

However, this ends my pleasantries of this story. It is not a good story. The plot to get us to this point makes zero sense. Bringing Jim back into the main Batman story could have been done in so many different ways than what we got. Pair this with some very lackluster art from Dani, and we are left with a less than memorable story. Unfortunately, all three parts have been this way.

Kudos to DC and Si Spurrier on completely throwing me for a loop and connecting the backup story to the main story plot. As decent as Ram V's story has been, the pace of things seems slow to develop. Let's hope the ending means that business is about to pick up for the arc.