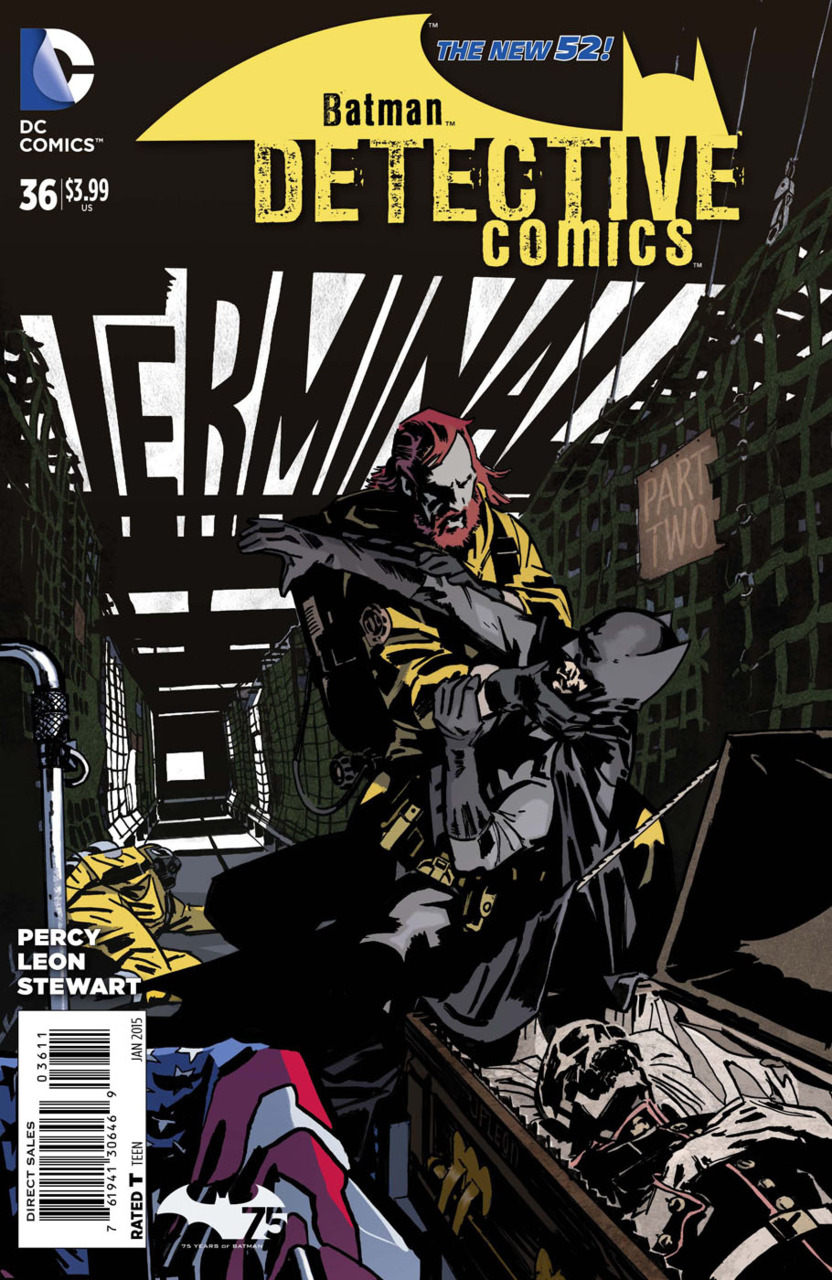 Wrapping up the two-part “Terminal” storyline, Benjamin Percy and John Paul Leon bring us a story set some time after the events currently taking place in the Batman Universe. As a quick recap to the events of Detective #35, Magnus Magnuson, an Eco-Terrorist has declared war on America. He’s done so by infecting Auspensky Airlines flight #2038 with a fast-acting virus that causes a complete breakdown of all organic matter that results in rapid aging and inevitable death. Flight 2038, or “Ghost Plane” as it has been dubbed by the media, crash landed at Gotham International Airport (GIA) with everyone aboard left as nothing more than a rotting corpse.

In this second and final installment in the story, the airport has been put under quarantine by order of the Batman who is working alongside Ed Boar, Chief of Police at GIA. A local newsfeed reveals to Boar and Batman that Magnuson is believed to be hiding in Eastern Europe with the only known vaccine to cure the deadly virus. Shortly thereafter, the Center for Disease Control (CDC) arrive on the scene to take control of the situation and put an infected Chief Boar in isolation. But the revelation of Magnuson’s whereabouts have caused Batman to investigate elsewhere and phone a friend who may be able to help…Spyral Agent 37, or as we know him, Dick Grayson.

Grayson is conducting a Plutonium investigation in Belarus when he gets the call from a very tired and aging Batman. Dick immediately changes course and turns his questioning into a very violent interrogation as to the whereabouts of Magnuson. Fortunately for Batman, Boar and all of Gotham City, the Russian had valuable information for Dick, sending him to “Club Hell” in Minsk although he had to lose a tooth in the process.

Batman, now working alone despite freeing Boar from isolation, has discovered that two guards were on flight 2038 transporting a body. Make no mistake, Boar is a soldier as is revealed in a brief flashback to his time in the Persian Gulf, but the infection has gotten the better of him and he makes one final request…to be put on a one-way trip to Hawaii so he can die in paradise surrounded by white sand and hula girls.

The CDC have been conducting their own investigation and have discovered something even more alarming than the virus, the presence of the Batman. Immediately, two CDC officers head for Patient Zero, the body that was being transported and as it turns out, is the root of the virus. When they arrive at the body, Magnuson reveals himself as one of the officers. He quickly disposes of the other one only to come face to face with Batman!

Magnuson is no match for the Dark Knight who defeats the terrorist and withdraws the blood necessary to transfuse with the infected survivors.

The story wraps with Bruce Wayne and Alfred Pennyworth onboard a private airline discussing the conclusion to the incident at Gotham International and Bruce making a very unusual request…a day of rest on the beach anywhere but there. A request, you may recall, also made by another protector of Gotham, Chief Ed Boar, who discovers in his hospital room a one-way ticket to Honolulu, Hawaii.

Like all good stories, this one leaves us with something else to ponder as we examine our own lives. All too often, we think of our existence like an airplane flight. There’s home and there’s the destination, everything in the middle is just noise. Benjamin Percy challenges us through “Terminal” to not just rush perilously into the future towards our inevitable death, but to “slow down and recognize the present.” That old cautionary tale that it may not be about the destination after all, but the journey.