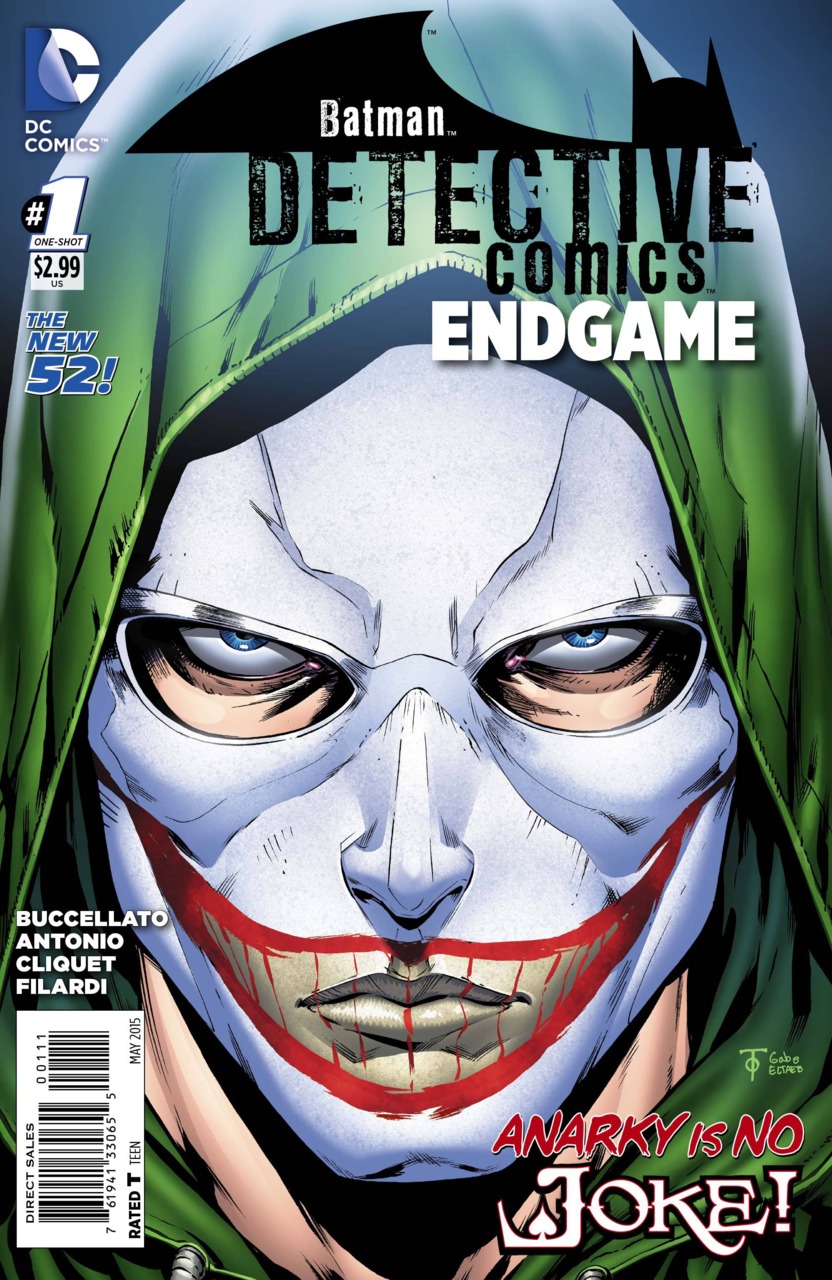 Just when you thought the Anarky storyline had wrapped up, we are given a one-shot Endgame issue. This issue follows the exploits of Lonnie, the young man who received his Anarky mask in the last pages of Detective Comics #40. Giving that it bears the title of Endgame; it is fitting that the streets of Gotham are still, being overrun by citizens infected with the Joker toxin. This issue was great in regards to storytelling and art direction. It is unfortunate that the end of the Anarky story arc didn’t end in such a grandiose fashion. Although this issue is by no means an end to a story, it is a very solid stand-alone piece of work.

We open up this chapter of Detective Comics with Lonnie attempting to contact his mother via cell phone as the city of Gotham is enveloped in chaos. While fleeing from attackers, Lonnie is saved by an uninfected youth, Dax. The apparent leader of a gang of rebels, Dax leads Lonnie to safety and quickly realizes that his technological talent might be of assistance to his cause. However, Lonnie remains preoccupied with finding and rescuing his mother. It is revealed that Lonnie’s mother is a stripper and is currently holed up in a gentlemen’s club not far from their current location. This scenario could have very easily fell into a pit of cliché, however, the Buccellato did a great job of making it feel very natural and organic.

In a frantic move to save his mother, Lonnie darts from the hideout under the guise of night and begins to traverse rooftops in search of his mother. Below on the city streets, numerous members of the Bat family are going fisticuffs with a large gang of Gotham citizens who have been infected with Joker toxin. These panels embody the type of fun that has been missing from many modern DC series. Buccellato reminds the reader how much enjoyable it can be just to watch a bunch of good guys deal with a bunch of bad guys. Fortunately for Lonnie, Batwoman is there to save him as he helplessly falls from a rooftop.

Upon hearing Lonnie’s plea for help, Spoiler agrees to help him and his friends gain access to the club where is mother is currently trapped. I enjoy seeing the Spoiler character being further developed, and I hope this is a character that will find a permanent home in the DC Universe. Feeling overwhelmed by a large group of Joker thugs, the group decides to spray paint Joker smiles on Anarky masks in an attempt to blend in with the crowd. The plan works flawlessly and the issue wraps up with Lonnie reuniting with his mother.

This was a great stand-alone issue of Detective Comics. An entertaining, but not too serious story made for a solid stand-alone tale. Although this issue did not add a lot to the Endgame storyline, it was a great ride from start to finish. I would highly recommend this book to anyone who is looking for a good time without a ton of commitment.