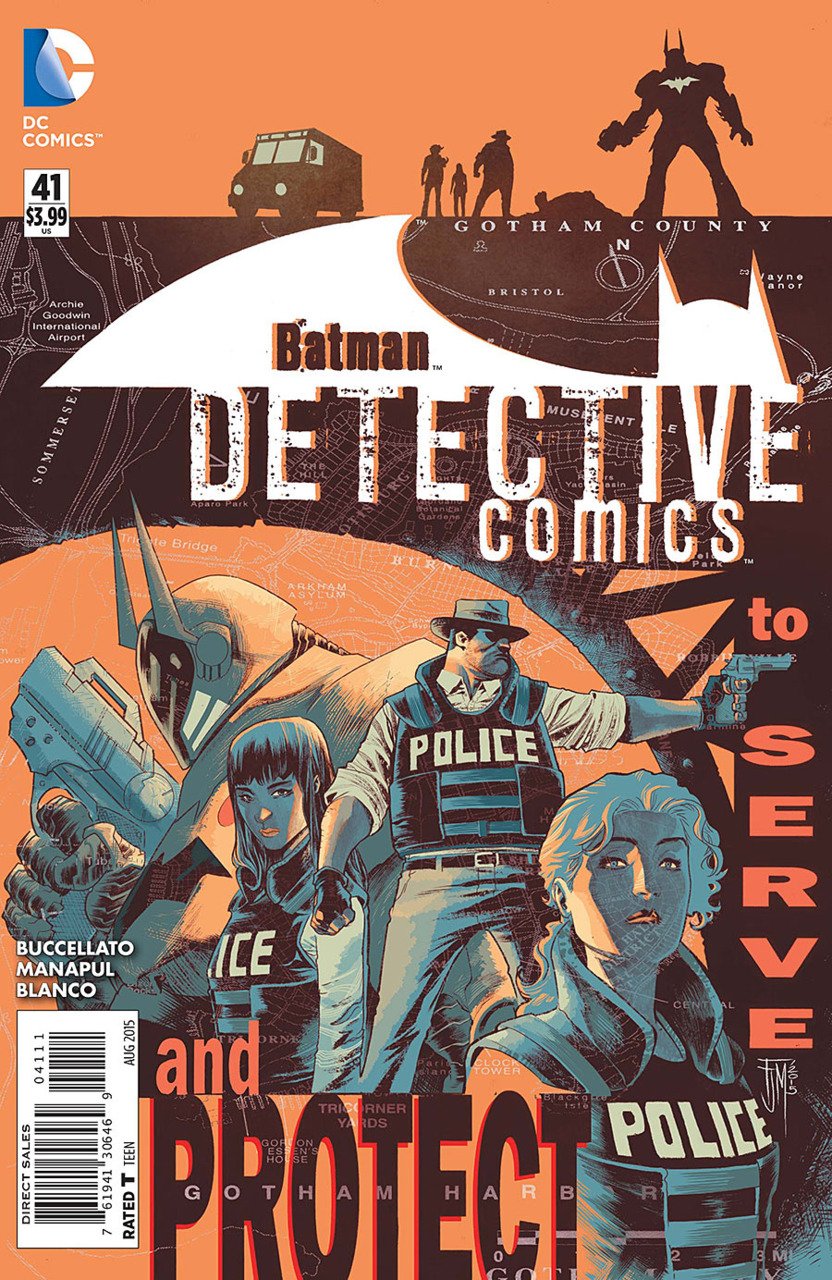 Now, to start this off, I did enjoy this comic. I want to make that clear to you. But it didn’t live up to my expectations. The eight page preview had me very excited. I had the feeling it was going to be the best bat-book coming out of June, and it still has time to climb up there. I think the biggest disappointment was seeing Fernando Blanco on art instead of Francis Manapul, which, really, isn’t fair to Blanco. He was one of my favorite artists coming out of Batman Eternal. But it’s not nearly as beautiful as Manapul’s. It just threw me off, and sucked some of my excitement out of the story. Lets get real, here, this is a big status quo change for this book, and it’s main artists aren’t taking the reigns. And again, this probably isn’t fair of me, but I kept imagining what Manapul would have done on each page. Something I am really into, is how much focus these guys are putting on the police department. It’s giving it more of a Gotham Central feel, and putting Harvey Bullock in the lead, really getting in to his character.

Talking to some friends on Twitter earlier, I realized that Manapul and Buccellatto seem to get of to a great start to their arcs, have beautiful looking art, but in their two arcs so far, seem to fall short on their conclusions. This was a problem I also noticed with their run on the Flash. Now, this is the first issue in a new arc, and I know there are many new readers to this jumping-on-point, so don’t take this that I’m saying you shouldn’t read this, because I think you should. I’m going to give them all the chances they need to overcome that in their storytelling, because the ride in the meantime is just so much fun!

I’m going to recap this in chronological order to make this easier on me. The timeline changes multiple times this issue. Three weeks ago, new commissioner – Maggie Sawyer – is trying to convince Harvey to take the lead in a new task force team. Harvey still believes that Batman is still alive, and wants to continue his search for him, rejecting Sawyer’s offer.

Two weeks ago, Sawyer is catching up with Gordon, who still hasn’t decided if he wants to take the new role as Batman. They are talking about the new team, and how they can convince Harvey to join.

One week ago, Bullock and Yip are at a bar, when Harvey gets drunk enough to start a bar fight with between the biker gang there and the cops. Yip joins in the brawl in hopes of being reinstated for helping her superior officer. Renee Montoya shows up, fights, and gets Bullock involved. Later, over some tacos, we catch up with Montoya and what she’s been up to over the past five years. She tries to talk Harvey into joining the team. She has herself, under the orders of Jim Gordon – to which Bullock accepts the job. Yip receives a phone call, and the person tells her to kill them all.

Thirty minutes ago, Bullock and Yip are taking their “partnership” to the next level, while Batman fights a some crazy looking day-of-the-dead wannabe. The thug places a bomb on Batman’s back, and Bullock can hear it across town.

Currently, the team arrive at the site of the explosion (Note: here, as well as a scene in Batman #41, you can find several posters for Black Camary’s band). They see Batman chase the group of thugs to a rooftop, and just as Bullock arrives, they blast Batman with an RPG, as Bullock screams – “NO!”

Sounds weirdly paced like that, but it helped with the recap. It was told better in the issue, I promise. I’m excited to see where this story goes, and I do hope Manapul at least does the last issue or two.