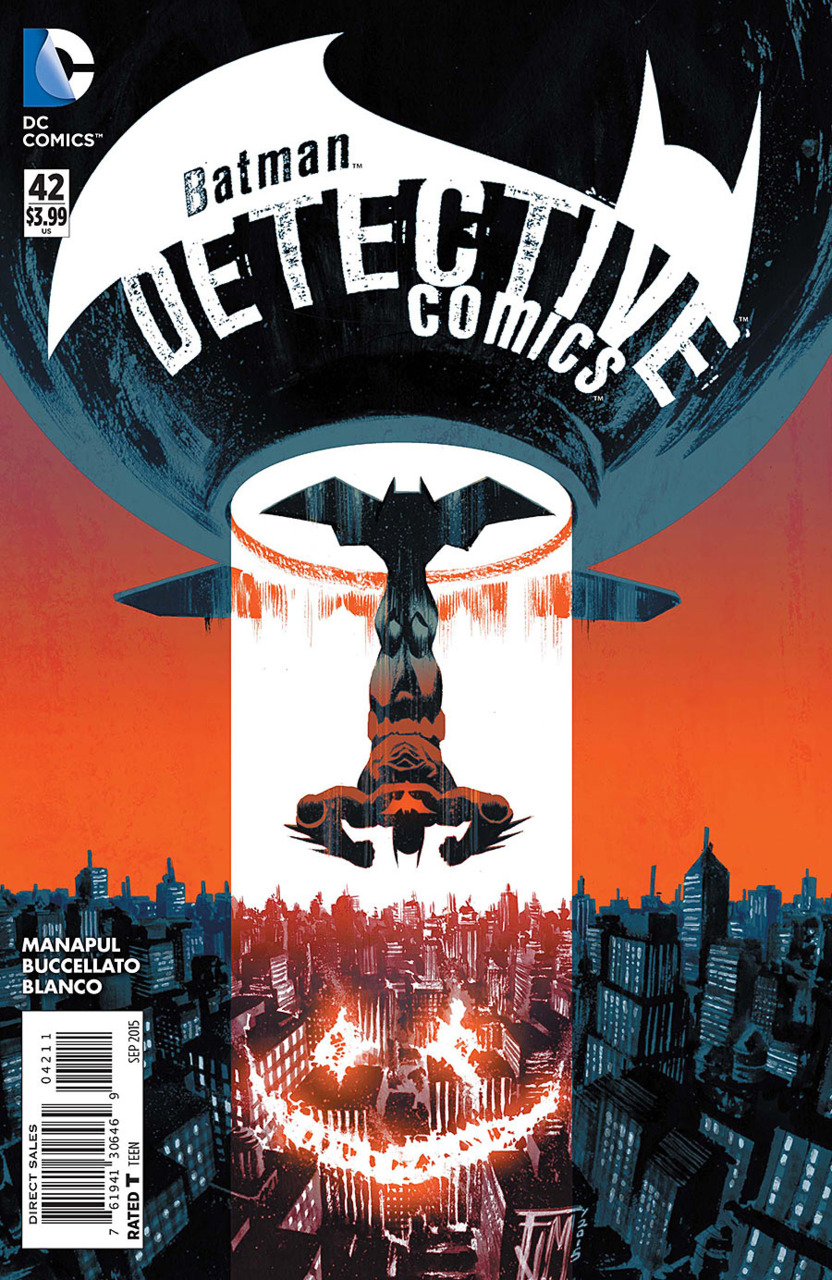 The story is much improved over last issue. Last issue, I felt like the writers did a good job disguising a boring story with how they paced it, because once I placed everything in order of it happening, it was super boring. This issue is much better, in that area. I’m still bummed out that Manapul isn’t doing the art on this book anymore, as he announced today that he is pursuing other opportunities, and I really miss his beautiful art and amazing storytelling. I was so excited for this arc after reading the eight page preview, and so far, I’ve been let down.

I don’t care for the villains at all, at least not yet. Maybe they will change my mind by the end of it. La Morte currently lacks motivation, and really, they just don’t seem that cool. These no-names are kicking Batman’s butt, and they are doing it with ease.

There are some positive things happening here, though. The portrayal of the GCPD is awesome. You see Bullock’s brilliance as a cop, and his hatred – yet acceptance that there is corruption in the police department. His relationships with the characters around him was done very well. And we also get some insight into the feelings Jim Gordon is having trying to fill the shoes of Batman. This book is solid, it’s just not what I was hoping. So while I’m not blown away, don’t think this is a bad book. It’ll get a positive rating from me. I’m also anxious to see who the new creative team will be in the fall. Who do you think it will be? Let me know it the comments below.

We pick up right where last issue left off – Batman getting shot with a rocket launcher, and falling off a rooftop. Bullock screams, and retaliates by shooting at the La Morte gang, drawing their attention away. A member of the gang sets Batman in his sites and disables the legs of the Batsuit. Gordon sees the sniper right before he pulls the trigger, and blinds him with the lights on the suit, and the sniper barely missed Gordon. A bunch of cops show up, and the gang retreats. The end up taking one of the members to a hospital, as he in a coma.

Later that night, Commissoner Sawyer is debriefing the department on what they have planned. They intend to go undercover and occupy the more expensive seats for what looks like a circus?… I’m not quite sure yet. Anyways, they seem to be trying to catch someone, and it seems like a solid plan. However, Keyes and Alvarez (from Catwoman) think that the new Batman is a joke, and this rubs Bullock and Montoya the wrong way, and we get a nice moment between the two just… talking. I thought it was really well done.

Bullock and Yip go home together again, when Bullock wakes up to a phone call from Gordon. But before he heads downstairs, he notices eleven missed calls from a strange number. He and Jim meet out on the sidewalk with a six pack of beer, and Bullock gives Jim a semi-pep-talk. It’s not very motivational, but Jim realizes that he can’t worry about impressing the other cops, he just needs to buckle down, and do his job as best he can.

The team gets a call, and they head back out on a mission. Yip goes into a convenient store and says she needs to take a call. Montoya points out that she takes a lot of personal calls, and Bullock pulls out a piece of paper with the mystery phone number Yip has been getting calls from, and asks Montoya to look into it. Meanwhile, Batman is pursuit of La Morte, when they set explosives on some water tanks, and throw a taser in the waves that are crashing down on Gordon. It short-circuits the Batsuit, and Gordon climbs out of the suit to take them on without his robosuit. Bum-bum-buuuuum!

I liked this issue much better than the last. It was exciting, moved the plot along and had a lot happen, but best of all were the great character moments throughout the issue.