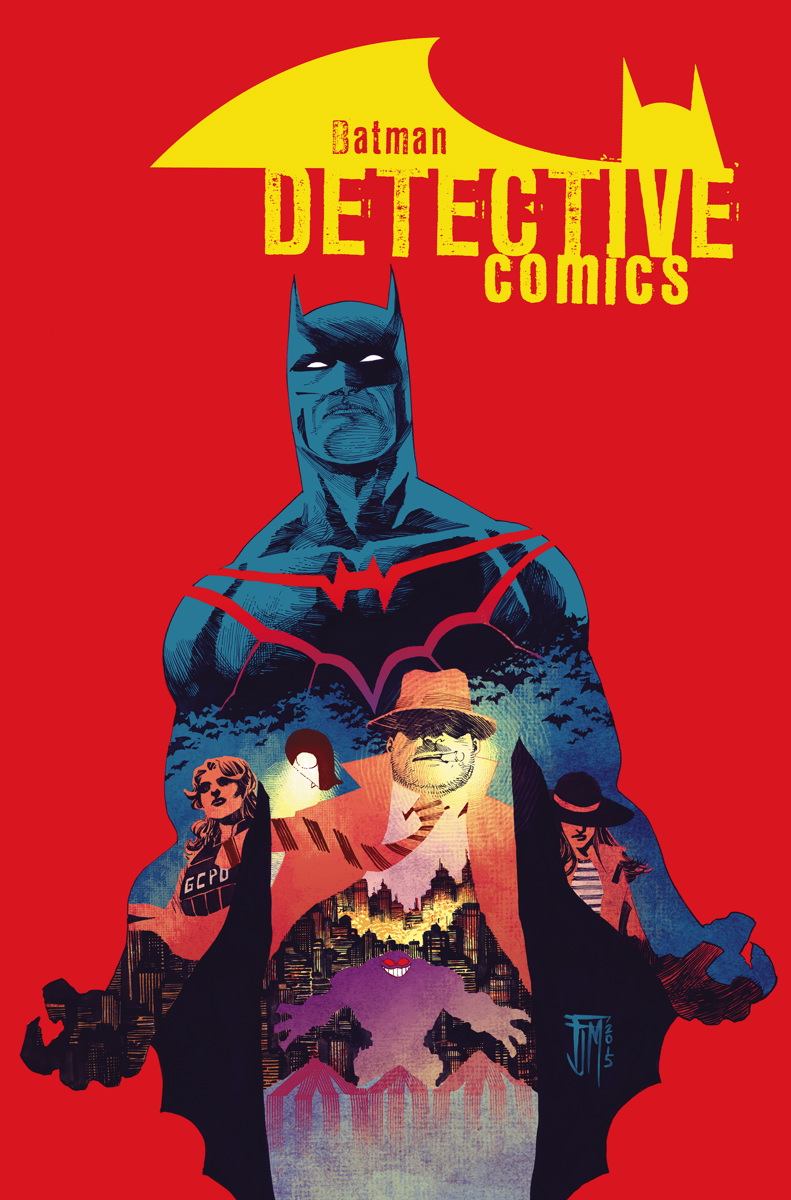 Earlier this Summer Francis Manapul announced that he and Brian Buccellato were leaving the Detective Comics (which they had been on since 2014), and at Comic-Con International: San Diego DC announced that Manapul would be creating a new Aquaman Earth One book, as well as working with Geoff Johns on the Justice League: Gods and Men event in October.  Now, in a new interview with Newsarama, Brian Buccellato talks about leaving the title (as well as his partnership with Manapul) behind and about his plans to wrap up what they have done in the title as his time ends.

See some pieces of that interview below and follow the link above for the whole transcript.

Newsarama: Brian, let’s talk about Detective Comics. As you wind up your run on the book, it looks like what you’ve done is taken the idea of this robo-Batman and putting him up against something similar — at least with the cliffhanger on the last issue. Was that the idea behind it like, “OK, what kind of villain would this kind of mechanized version of Batman meet?”

Brian Buccellato: Yeah, and I think it was literally me saying, well if this is going to be a robot-type Batman there should be a robot version of other kinds of villains. Francis and I talked about it and decided a Jokerbot would be the best counter of Bat-Gordon (as I call him).

Nrama: There’s a mystery surrounding Joker’s Daughter’s involvement at this point, but in the earliest issues, you’ve been utilizing a team of villains who have a Day of the Dead look about them. What’s the thought behind creating them?

Buccellato: We just wanted to do something different, and thought it would be cool to have a trio of acrobats because, you know, in Gotham, there’s a history with acrobats, of course. We put our own Cirque Du Soleil sort of spin on it. So it was really just finding an interesting way to challenge the new Batman — three guys who were very acrobatic, using agility and speed to combat him. And just aesthetically, Francis wanted it to be kind of like Day of the Dead, and give us a different visual and a different villain.

Nrama: Francis, we know, is working on Aquaman Earth One and some of “Darkseid War” in Justice League. Are you still working as an colorist with Francis, or are you both going solo, with you concentrating on writing now?

Buccellato: I’m going to be done with coloring, at least for awhile. Francis is going to do solo projects, and I think he’s wanting to color it himself, especially Aquaman Earth One. He’s really been wanting to do all the art duties himself. As far as me, I’ve been moving toward dropping coloring and being just a writer. That’s where my passion is, so I’d rather be writing. And I colored for many, many years. So you probably won’t see me doing coloring for awhile.

Nrama: OK, I want to talk about September’s Detective Comics #44 — your final issue on the book — but before we get to that, I know you’ve got some stuff coming up outside DC comics, and even still at DC. What else are you working on?

Buccellato: For DC, I’m still doing Injustice: Gods Among Us. We’re in Year Four, that’s coming to a close in the couple months. And then we’ll be on Year Five of Injustice. And then I do have another project with DC that I can’t announce yet, but I think it’ll be announced, hopefully, in the next two months. And for Image, I have a creator-owned book I’m doing with Toni Infante. It’s called Sons of the Devil, and it’s sort of a psychological horror book. #4 comes out this month, so we’re well on our way with that one.

Nrama: And Detective Comics #44, what can readers expect?

Buccellato: There are a lot of threads we’ve set up — sometimes you get ambitious with all the things you want to establish in the storyline, and in this case, we had four issues to finish it. But you’ll see a lot of things we set up in that original eight-pager all tied up. This is obviously a swan song for Detective Comics, so I had to make sure the story is finished. So you’ll see the fight scene — you’ll see the resolution of that. You’ll see the resolution of Detective Yip and her betrayal of Harvey and the Gotham police force. And you’ll see a new partnership formed with Harvey and Montoya — one that hopefully the next creative group on Batman will pick up.