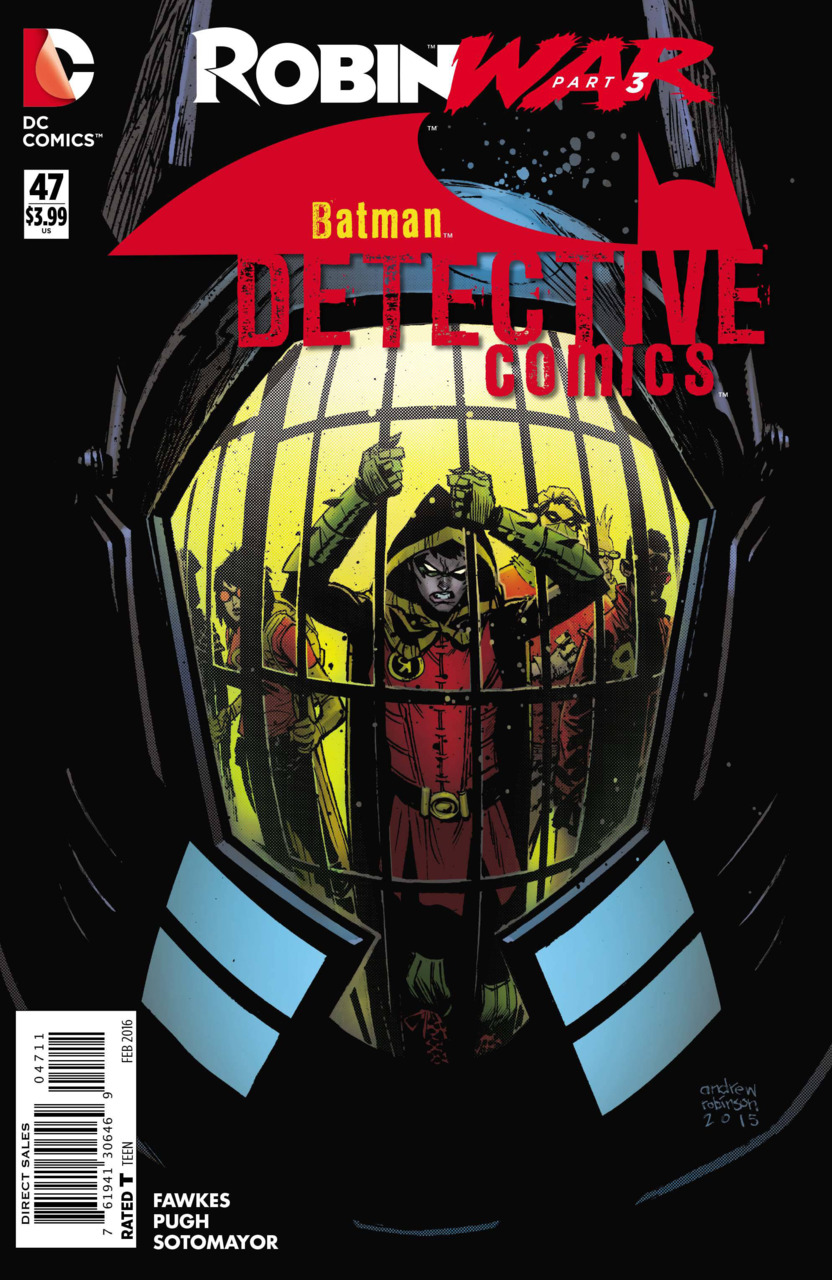 Disclaimer – this is part 3 of Robin War, following Grayson #15.

This part was the weakest of Robin War, so far. Now, it wasn’t bad, but it did seem rushed. And I think that’s because it was. Solicitations had down that Peter Tomasi and Marcio Takara were to do this issue, and I was excited to see that. Tomasi’s knowledge and how he handles the Robins would have been a great thing to see, and Takara’s playful art style would have fit in perfectly… But that’s not what we got. And I don’t want to hold that against this creative team, but it’s hard not to compare.

Ray Fawkes writes this issue, and it was an alright addition to the series, but it seemed rushed, in that we see a scene twice, but it’s not consistent in itself. Why the decision was made, may have been to fill page count — I don’t really know. But it did bug me seeing that. Otherwise, I felt like Fawkes did a decent job.

Steve Pugh is the artist this issue. It’s great seeing him get to draw Batman, as I enjoyed him on Animal Man. I liked how he drew Gordon’s stealth suit, but the robo-suit didn’t look so great. He did great with the choreography during the fights, as Dick looked on point. He did have a moment or two when there was a bit of inconsistency, but I enjoyed it for the most part. He did very good offering us some differences to the panel layout.

Chris Sotomayer colors here, and I felt like he did a pretty good job, except for on the blacks. Which may not be fair, because it may Pugh on the inks. But it looked grainy at times, when it’s a shaded black, and it just doesn’t look good. Everything else looks pretty crisp, and then there is this distracting texture on part of the page that just doesn’t hit the eye right.

Wes Abbot takes care of the lettering, and does good continuing the pencil on paper look for Gordon’s monologues. But there was a moment about the middle of the comic where I got lost on the page because of the order of the lettering. It almost made me overlook three whole panels on that page, which kinda irritated me.

Recommendation – don’t buy, unless you are following Robin War.

Because of the current Gotham City councilwoman’s Robin Law that passed, the GCPD is arresting all sorts of kids and placing them in what is called “the cage”, and for some reason they place highly flammable barrels all over the room… That’s not going to be a plot point later. Gordon and Bullock aren’t too happy about this, because these kids aren’t being treated fairly by the law. They are holding them longer than legal, they don’t seem to be contacting their parents, they aren’t given the ability to contact a lawyer. Gordon flies off in his suit to an unknown location for an unknown reason.

Meanwhile, in “the cage” Damian pulls off his mask, and takes out a hidden explosive, because that’s safe, and throws it at one of the barrels, but the guards have an anti-explosive foam that stops it from working, and then they decide to let them down one cage at a time, and take off their costumes and gadgets. Just before they open the doors, though, someone tells them that it’s not necessary, but we don’t see who it is.

Gordon stops at a random apartment for an unknown reason, and Dick just starts punching Batman for no apparent reason. They tumble their way into the alleyway as a member of the Court of Owls watches in a nearby window. Gordon even has flame punches now, for some reason. They continue to fight until Gordon unmasks himself, and I’m surprised that Dick even recognizes him with how different he looks, and immediately stops fighting him. Why were you fighting in the first place?!

They two brainstorm at who benefits from all of this, and it leads to Councilwoman Noctua. They go off to pay her a visit, jumping off the building together.

When I first read it, I had a few problems. But as I recapped it, the less things made sense. No, Gordon and Grayson, you were right the first time  it’s not “elementary detective work”, it is messy.