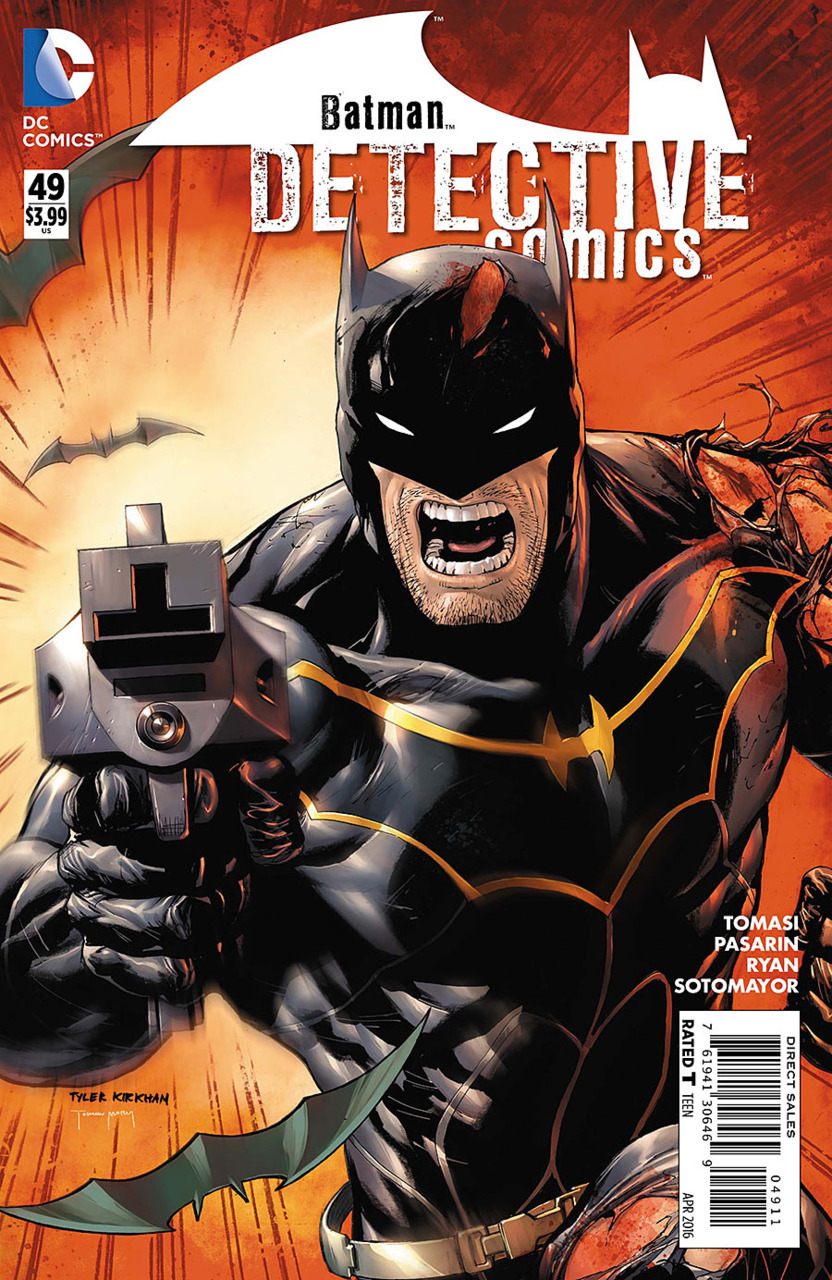 Breakdown: Peter Tomasi continues off of his last issue, and it’s still just as interesting as it was last month. I feel like he’s gotten back into his groove after that last weird story arc. That was was unlike him, but he’s back to doing what he’s good at. He’s proven he can do a well told detective story, and maintains the key to his success — the family dynamic he is so good at… Even if it’s in little moments, it still feels genuine, and add so much to the characters involved.

Fernando Pasarin isn’t my favorite artist… I think I may have mentioned that last issue. But I feel like this was one of the better issues that I’ve seen from him. There were still moments of stiffness in some panels, but for the most part, I think he did well on the action bits. They were a bit more fluid, and that always helps in storytelling in a still medium — that’s why I bring it up so much. He has moments where he puts a bit more detail in his art than I think he should, to the point where it takes you out of the moment. The way he draws Batman’s ears looks funny to me… They are too far forward, and too short… They look like the dumb devil horns that Tony Daniel did to Jason’s bat ears halfway through Battle for the Cowl. Not going to count off points for a stylistic choice, I’m just saying that I think it still looks dumb.

Matt Ryan does a solid job on the inks. But with that, I do think that he contributes to the “too much detail” I accused Pasarin of, and since this is the guy with the final say of how things look, I think he should get part of the blame too. You can’t say I’m not an equal opportunity… critiquer?

Chris Sotomayer does a really good job with lighting. It’s very consistent throughout the issue. Whether it’s lighting from the Bat-Blimp, a cigar, a creepy room, a raging fire… He takes all this into account, and it’s very well done.

Wes Abbott does an amazing job on the letters here. He has a lot of opportunities to mess up here, and he doesn’t. He has a very wordy scene during the investigation process, an intense action beat, and an emotional scene to work with — yet he maintains a level of consistency that makes the comic flow with ease.

Recommendation: I’ve really enjoyed these last two issues, and I’m looking forward to next issue, which I think may be the finale..? Regardless, I suggest buying the last few issues. They are giving you exactly what they advertised — a detective story.

Synopsis: Gordon makes his way to the astronaut from last issue, and cuts him down. While the Bat team are trying to establish a crime scene, Gordon gets irritated at the spotlight on him, allowing half the city to watch the whole thing. He breaks the light, just as the GCPD show up, and all the while, our killer escapes with his dog.

In the morgue, they realize that the man is wearing a legit NASA space suit from the 60’s. It was sold on bBay a few weeks back, but with a stolen credit card and sent to the house of a dead man — so they have no leads there. It seems as thought the man suffocated from a plastic bag, and the airtight helmet he was wearing. The man has a tan line on his face, as though he had a beard before — so the man we saw last issue. The name tag on his suit is Alan Shepard — the first American in space. He’s missing a bone too, his humerus. Harvey notices a similarity, they are all dressed up – not only as historical figures – but ones that Gotham has statues of at the Exposition Grounds. It seems as though the killer is making models of the statues faces, and matching them with similar looking people living in Gotham.

Daryl notices that one of their cameras has picked up on something. The killer has kidnapped a woman, and is going to burn her alive with her dressed as Joan of Arc. Gordon ends up saving the girl before she is seriously hurt, but the killer escapes. Gordon begins taking this more personally… This could have easily been Barbara. He watches over her in her home, as he talks it over with Harvey.

The killer goes home and rests up, and then begins working on his next “work of art”. He dresses a group of men (seemingly dead) as Union soldiers, and has an out-of-control horse drag them through town, as Gordon tries to get the horse under control.

Closing Thoughts: There are no signs or hints as to who the killer might be. The blatant hiding of his face would make you think we’ve seen him before, but I don’t believe we have, it just makes the guy more creepy. If that is the case, I hope we never see his face, as a reveal would be pointless. I also wonder if Barbara may get captured at some point. The story seemed to hint at that, and I think it could lead to a great moment between father and daughter, but it’s something that I don’t think would hurt the comic if it doesn’t happen.