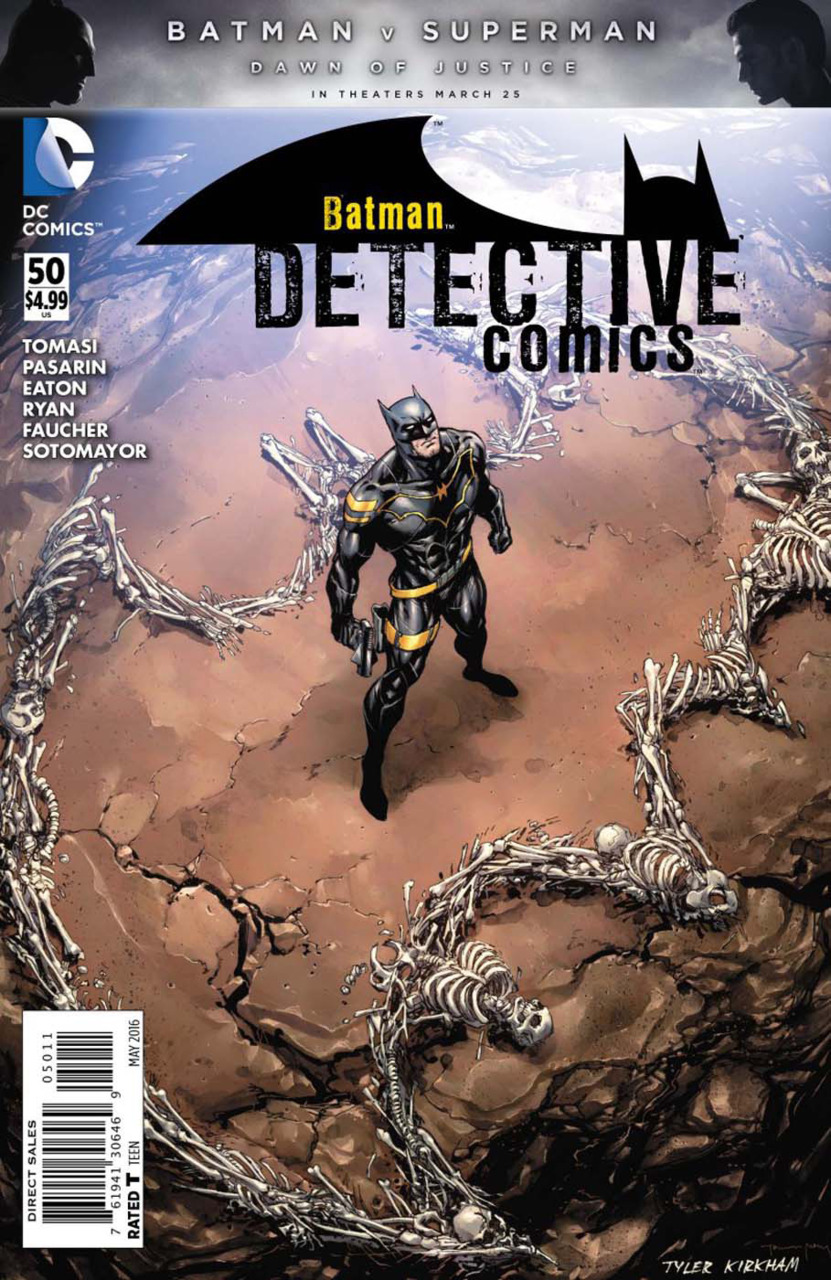 Note: Although I will be addressing the additional content in this extra-sized issue, the focus of my review will be on the continuation of the “Martyrs and Madmen” story. You can look for my thoughts on the additional story in the Closing Thoughts section of this review.

Breakdown: Peter J. Tomasi delivers another well thought out script, as we reach the conclusion of this story. I feel like the overall pacing of this story arc worked very well. Any more than three issues, and I probably would start getting bored of this story. If I had one complaint, it’d be that we didn’t get an actual family moment between Jim and Barbara. The last few issues seemed to have hinted at that to come, and I was looking forward to that — seeing how well Tomasi handles family dynamics… Which, we still have a few issues before Rebirth, so I hope we get that interaction before the end of the Tomasi/Gordon era ends.

Fernando Pasarin’s pencils art consistent with what he’s been giving us up to this point. It’s still not my favorite art, but I still stand by my statement that this is his best work yet, and I hope he continues to grow. I don’t understand why he couldn’t finish. With just a few pages left, he had to drop out and let someone else close out for him, which was a shame.

Matt Ryan’s inks are still super detailed and sketchy when it comes to adding to Pasarin’s work. I understand he shouldn’t drastically change what he’s been doing so far on this story, but I would like to see him not try to add so much on their next collaboration. Less is more.

I really like Scot Eaton’s work. His work is much more dynamic than Pasarin’s, so if there was a place to call in a switch, the ending fight was the right place to do it. He made the fight scene more engaging, and added some interesting perspective in a few panels that impressed me. There was a double-page spread that had five panels; one large one, and four smaller ones grouped together… Well, I got lost as to whether I was supposed to go into a Z pattern with the last four panels, or a N pattern… Not a huge deal, but I find issues like this worthy of bringing up when taking in storytelling into account. Things like this matter, dad-gum-it!

Wayne Faucher’s inks compliment Eaton’s work very well. His clean brushstrokes add to the fluidity of the choreography of the fight, and the thicker inks on the two characters accentuate the two involved — making the fight easier to follow.

Chris Sotomayer’s colors make the transition between the two artists much easier to take. In fact, I like how they look more with the secondary art team a bit more, as he has a bit more artistic liberties with shading, and such. Sotomayer has been solid throughout the entire run, so far.

Wes Abbott’s letters continue to be easy to follow. He never detracts from what’s going on elsewhere on the page, and makes your eyes flow to where they should.

Recommendation: It’s been a solid story… It just doesn’t feel like it’s a MUST READ material. Honestly, if I were to introduce someone to some Batman comics, this is not a story arc I’d tell them they should read. In fact – as good as it is – this wouldn’t be the first of the Tomasi comics I’d give them. Like I said, it’s been good, just not great.

Synopsis: Gordon and Bullock are looking over the memorial placard that our killer based his last crime on. Gordon is getting frustrated — there’s a pattern to each of his kills, but not one he can follow, and nothing to reveal his motive…

Meanwhile, our killer puts all the bones he’s collected so far into a cauldron, and drinks the bone stew. Then, since the guy is clearly sane, he puts on a new mask — that of a dog — and he chases down and kills his dog.

Gordon and Bullock are attempting to interrogate a man they believe to have a connection to the killer, when they get a call from Julia telling them to check out the zoo. They show up to find the dog, who is supposed to be similar to Balto. Gordon rescues the body (evidence) from being eaten by a polar bear via tranquilizer, while the killer (still wearing the dog mask) knocks out a couple who happen to be on a date.

Gordon realizes that all the statues are looking in the same direction, and that it centers at a point in the city. He goes there to find another statue of St. George vs. the Dragon. Our killer believes he is a hero… All this, he has done to open a portal to hell, so that he can slay THE dragon — the Devil.

The GCPD can trace the minerals on the dogs feet to an old nearby church/cemetery. Gordon makes his way there, just as the psycho is about to offer his final two sacrifices — which should open the portal. Gordon interrupts this “ceremony” and the two get into a fight. Gordon defeats him by knocking him into the pond, and with the dude wearing complete knight armor, he sinks to the bottom. But Gordon, being the good man he is, swims to the bottom, takes off the armor, and brings him up to the surface to turn him over into police custody.

Closing Thoughts: To be honest, at first I was kind of upset about the secondary story in this comic. It didn’t add anything to… well, anything. I felt kinda like I got ripped off… DC did charge us extra on this comic. But then I got to the end and realized each of those single page spreads were updated takes on past covers from Detective Comics. And that was a much cooler idea than any story most of these other #50 issues this month will do. So although I didn’t like it at first, the idea grew on me, and I liked looking at all those different artists doing their thing on each of those pages. And honestly, a celebration like this is much more memorable, and will leave me something I’ll want to go back and look at again later.