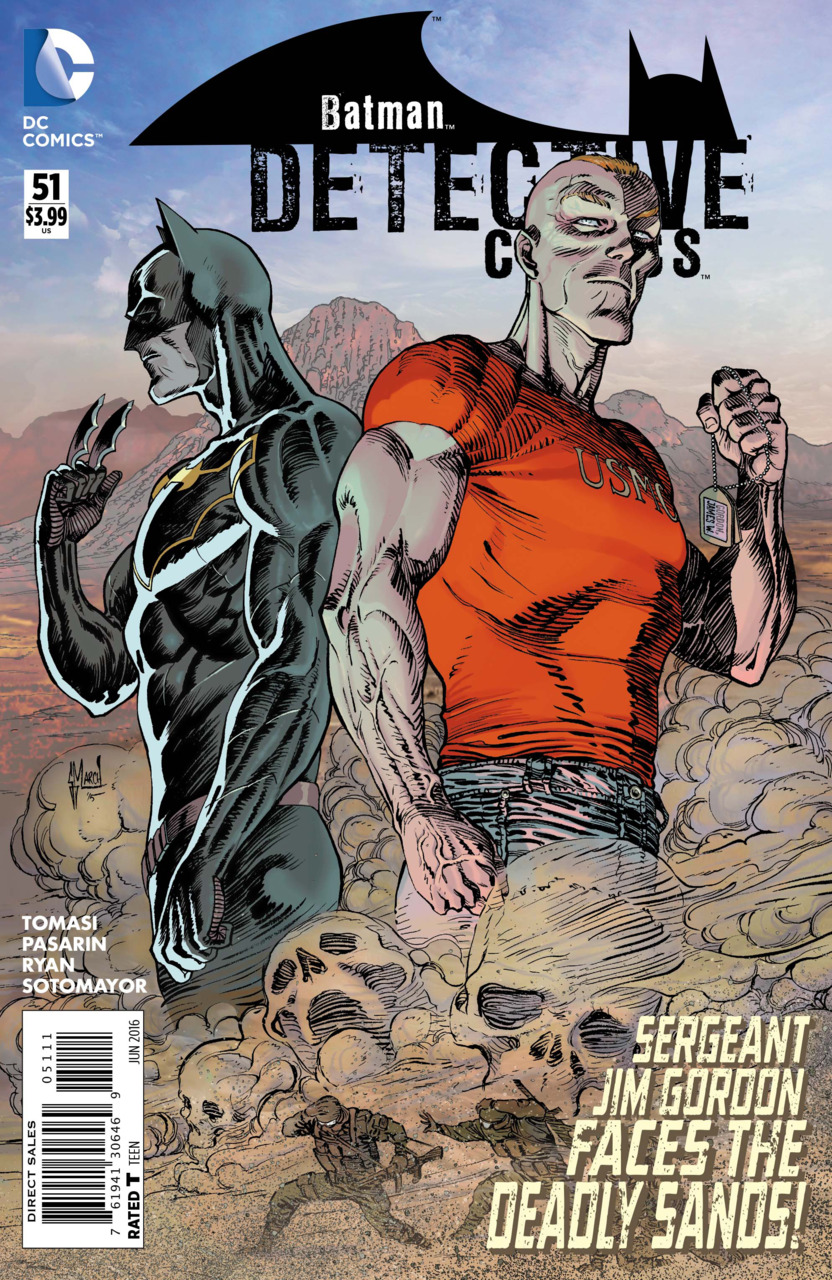 Breakdown: First of all, I usually don’t mention the cover unless it stands out in some way… But that cover by Guillem March is bad… I mean, what is going on with Gordon’s hand… or the rest of him? I’m not a great artist by any means, but I can at least do that.

This isn’t Peter J. Tomasi’s best work… if you are wanting a decent detective story, this is all it is. Just don’t come in with high expectations of Tomasi’s past work in mind… I hear his Superman #51 was really good this week.

Fernando Pasarin’s art is a bit more dynamic than usual this time around, but there were also a few moments where the anatomy was off. When he was on Batgirl, that was something that constantly bugged me — people just can’t bend like that… But his storytelling has improved over the course of this run. It would have been easier had he not jumped back and forth within the same scenes every few pages, but it has improved.

Matt Ryan did a serviceable job… I really do think he needs work on drawing attention to the focus of the scene instead of getting super detailed and adding so many lines across the page. It overloads the page, makes it too busy, and makes people look ugly. Chris Sotomayer’s colors were the standout this issue. The flashback in the desert was the most beautiful part of the comic. He adds a grainy texture to his soft-light colors of the desert, giving it the feel of being in the desert. It was very well done. Wes Abbott’s letters were solid. He doesn’t distract you, or disrupt you from the flow of the comic… Well done, sir.

Recommendation: At this point, I’d just wait to jump back in when Rebirth begins. These are just okay stories… They aren’t something I feel like I have to share with the world.

Synopsis: We start off with a man running through the streets of Gotham, trying to loose someone who is after him… He seems to relax, and he goes to Jim’s house to talk to him. Jim is just getting back from the grocery store, and recognizes the man as one of his old buddies from the Marines. The man begins telling Gordon of something going they stumbled across in Afghanistan — something bad. Before he can finish, though, a man attacks them both. Gordon takes him out within a few moves, but realizes that his friend’s throat has been cut open, and he bleeds out in front of Gordon. Gordon attempts to get information from the attacker, but he bites down on what seems to be a cyanide capsule, but we later find out that it was a mixture of various drugs and poisons… regardless, the result is the same and the man dies as the police arrive.

Gordon heads off to the morgue inside the GCPD, to get any additional information off his old friend. It looks as though the man has been tortured, as very precise strips of skin have been cut from his back, and legs. The mortician believes it to be ritualistic, because of the precision. Gordon goes home, gathers some gear – including his batsuit, and travels to Afghanistan.

He arrives on a U.S. base, and chats it up with some of the soldiers there. He finds that some of the Marines have gone missing, and they don’t really know where to look… I mean, it is the desert. Things tend to get lost out there. Gordon pokes around until he finds a Colonel who has been making deals with a religious fanatic who name-drops the same deity the attacker was screaming at the beginning of this issue. Gordon beats them both down, the Colonel decides to cut ties with this group, and shoots the psycho in the head… Gordon knocks him out though, saying he needs to answer for what he’s done. Later that night, Gordon scares the mess out of the Colonel when he visits him as Batman, and demands everything the man knows of the group “Amun-Set”.

The next day, Gordon travels out to some specific coordinates that he received, when he is caught up in a sand-storm. The storm flips his Jeep over, and his is trapped in the sand. He flashes back to his days in the Marines, to when his group stumbled across a tomb, and inside were a group of men, torturing many people by cutting strips of skin from their backs, and possibly cooking it and feeding it to their prisoners?… Seriously, I’m pretty sure they are making people-bacon… Gross.

Closing Thoughts: This issue is pretty straight forward. There are times when it seems to jump back and forth in terms of storytelling, but in terms of narrative, it’s a linear story. I’m not sure if that was an accident or not, but it worked out okay. And that’s how this whole run has felt… just okay. I think Tomasi blew us away with Batman and Robin — he had something to say in that series. But here, it just feels that he’s being forced to write some stories. We have one more issue with this team before Rebirth starts, and we get all new creative teams across the board, and I must say, I’m very excited for what we have coming in a couple of months.