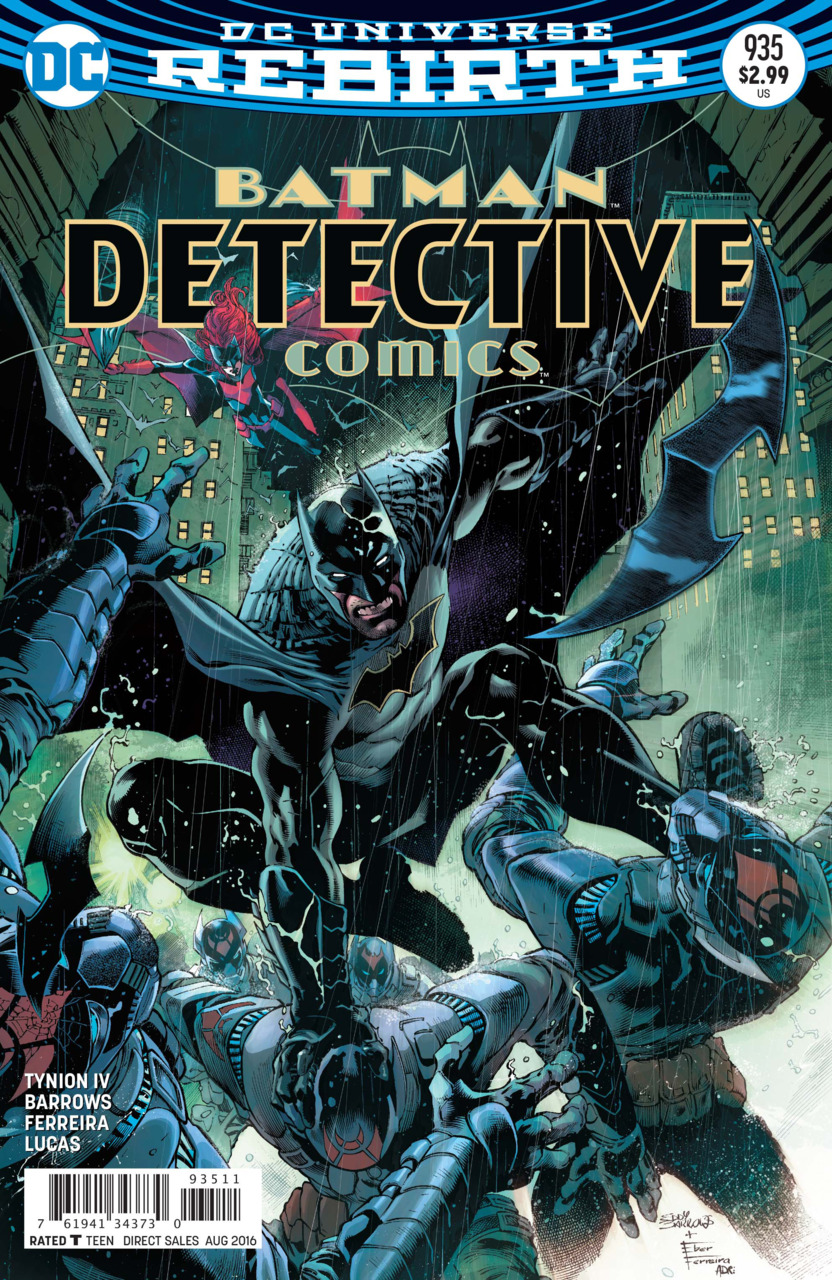 In Brief: As Batwoman takes the team through intensive training, Batman’s fight against the Colony reaches a critical point.

Summary (Spoilers): Spoiler (Stephanie Brown), a seemingly depowered Clayface, Red Robin (Tim Drake), and Orphan (Cassandra Cain) face a vicious army of Jokers in a burning city. Batwoman (Kate Kane) orders them to strike, but though Orphan manages to hold her own, the rest of the team is overwhelmed. Red Robin overrides what turns out to be a simulation he designed called the Mud Room, using Clayface’s material. He clashes with Batwoman over running the sim for three hours, but she tells him the team needed to know what to improve for scenarios of extreme exhaustion. She gives each member notes, but when Tim and Steph both want to do some practical heroing, she reveals that Batman has forbidden action in the open until he gives the go ahead. The young ones are frustrated at having a state of the art base (the Belfry) setup by Tim, but not allowed to use it.

Session finished, Batwoman heads out. Clayface wants to use Tim’s tech to suppress his powers and audition for acting jobs. Tim heads out to ask Batman why the team is off the table. Batman takes him to see Azrael (Jean-Paul Valley), who is under the care of Leslie Thompkins in Valley’s secret base. Valley regains consciousness for a moment, and tells Batman that the Colony is here, then slips back into his coma. Batman and Red Robin leave, and Tim asks why Bruce asked him to come back to Gotham. Batman says that it’s because he wants Tim to know he regarded him as a full partner, and that he doesn’t have to be aloof from Gotham and the Bat-family anymore.

At Steph’s apartment in Park Row, she chides Tim for not telling Batman that he got into Ivy University’s Genius Grant program. Cass pokes her head in the window, but Steph asks if she could have the apartment to herself so she can scold Tim (who she describes as her boyfriend). Cass smiles and heads out. Tim and Steph discuss Cass’s living situation – though she has her own apartment, she mostly crashes at Steph or Harper Row’s places. Steph brings the conversation back to Tim’s future, and tells him that he has to choose what’s right for him, not her, Batman, or out of fear. She and Tim then proceed to kiss deeply, and the page fades out on their discarded uniforms on the floor.

Kate meets with her father, who urges her again to join him in her crusade against crime. He disparages Bruce Wayne and the Wayne family, but Kate remains loyal to Bruce’s plan.

Bruce is headed home in the Batmobile, talking to Alfred over comms, when he is assaulted by at least two massive armored vehicles (which look almost exactly like the Tumbler from the Nolan Batman films). The Batmobile is hit by an EMP, cutting off connection to Alfred, and fifty Colony Bat-soldiers surround the caped crusader. They say he should have let it go, and now they will take him in. Batman snarls, “You can try,” and the battle commences.

In Depth: Tynion and Barrows provide another really excellent issue. There is still a lot of setup – setting up the team’s base in the Belfry, showing us the status quo between Tim, Steph, and Cass, and giving us relationship updates between Batman and Red Robin as well as Batwoman and her father. The latter in particular has caused a lot of speculation that Colonel Kane is involved in the Colony, somehow, either leading or contributing.

This series really exemplifies the kind of return to the relationships and character focus that Rebirth promised. The relationships between Tim, Stephanie, and Cassandra are all direct callbacks or developments of their early incarnations in the 90s and early 2000s, as well as expertly tying into Tynion’s work with them in the two Eternal series. Clayface remains one of the things that sticks out as somewhat unnecessary – he provides some fun humor, as well as world building with his material being used for the Mud Room simulator, but though he has his own goals and personality, he doesn’t have a connection to other characters or the plot, so far. Batwoman is very interesting, though most of what’s reflected in her characterization and relationships seems to call back to Greg Rucka’s crystallization of the character in Elegy, rather than anything that happened in her new 52 run (which this reviewer is still catching up on).

Eddy Barrows’s pencils (inked by Eber Ferreira) is somewhat inconsistent with faces, and the colors by Adriano Lucas also sometimes shift from shade to shade, but overall, the book is both extremely attractive and very polished. The tone is dark and moody, and creative uses of parallel panel strips or akimbo blocks of panels create the sense of paranoia and menace caused by the Colony’s plans. However, the art team’s work also sometimes shifts into beautifully soft-focus effects, such as the kiss between Tim and Stephanie (or the introduction of Clayface last issue), which highlights the emotional range we can expect from this book.

Pick up/Pass? A really solid follow up to an excellent beginning, with strong art and writing – definitely pick up.

In Conclusion: Detective Comics powers through its second issue, developing relationships and raising the tension both inside and out of the team.