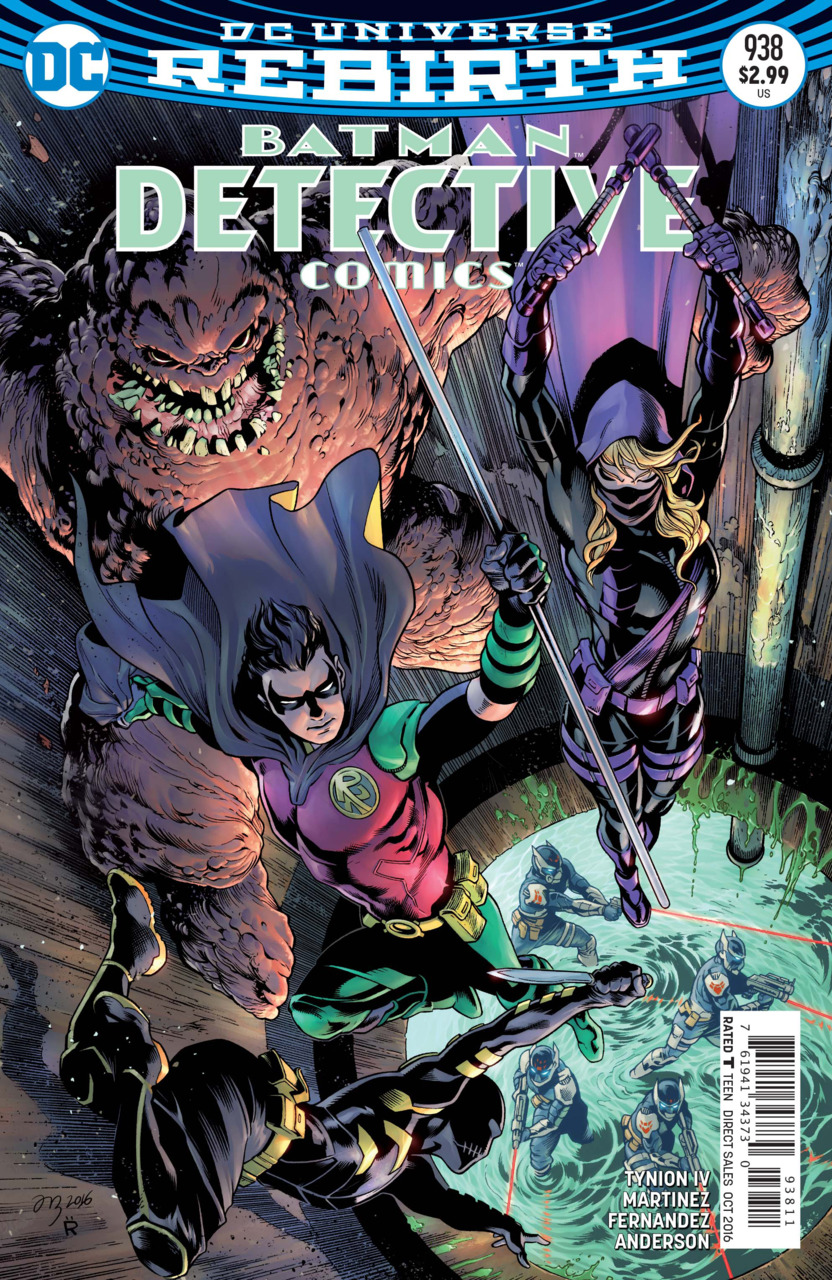 In Brief: Batwoman (Kate Kane) leads her team in daring surprise attack on the Colony to rescue Batman from her father.

Summary (Spoilers): Many years ago, Colonel Jacob Kane was assigned to a branch of the military so secret the President doesn’t know about it. The unit was designed to counter threats like the Court of Owls and the League of Shadows, and Kane, having just lost his wife and daughter to terrorists, must fight the darkness. However, his surviving daughter, Kate, has run away, and during his meeting, he is notified that she’s been found in the Arlington National Cemetery at her mother’s grave. She asks Jacob how he survives their loss, and he tells her because he’s part of something more – the military. She says she wants to fight with him, and he promises he will make it happen.

In the present, the Colony soldiers force Jacob to run from Batwoman’s attack, while he insists that it wasn’t supposed to be this way. Batman tells Kate she shouldn’t have brought the team, but she tells him to stuff his advice. The plan is escape, not victory.  Orphan (Cassandra Cain) and Clayface (Basil Karlo) are the “muscle,” taking a huge number of Colony Batmen out to clear the path for escape.

Red Robin (Tim Drake) faces off against the General (Ulysses Hadrian Armstrong) as he tries to get the Colony’s plans off of their computers. Armstrong tells Tim the team is now on the list of enemies, then escapes using a trap door as Colony soldiers surround Tim. Just as he’s about to fight, though, Spoiler (Stephanie Brown) remotely activates their grenades, forcing them to run, and allowing her to swoop in to save Tim.

Clayface transports Batman and Batwoman to the top level, meeting up with Red Robin and Spoiler, but Orphan has already cleared the way, smiling. However, Jacob and the General arrive on Bat-hover-APCs, knocking off Kate’s cowl with a Batarang, and asking her to join them. She angrily refuses, and Jacob reluctantly tells the soldiers to pacify the team. Red Robin, however, has hacked the Colony’s helmets, causing them to go deaf, and the team disappears in a cloud of smoke.

Jacob is saddened and frustrated that the team has shut his team down just before their big strike, but Armstrong offers an alternative – carry the strike out using drones. Jacob, remembering his promise to Kate twenty years ago to fight with her against the darkness, gives the order to go.

In Depth: Tynion and Martinez have gone from strength to strength, keeping a strong emotional focus on Batwoman and her relationship with her father and Batman, while allowing each member of the team at least one moment per issue to shine. After the very emotionally effective flashback opening, this issue is pretty much a giant action scene – possibly even more deserving of the title “The Great Escape” than last issue. The art team continues to provide clean, appealing design and action sequences, and Tynion’s grasp of the characters continues very strongly. It’s really good to see this kind of focus on Kate Kane after the mess of her previous series, and the exploration of Jacob’s motivations in running the Colony reveal that he’s no mustache twirling villain, but a man who believes he’s saving his country and helping his family.

Batman and Batwoman’s relationship is also highlighted, with Kate demonstrating that despite Batman’s loner habits, she is capable of running the team and standing up to him when necessary. Batman also proves that he can listen, though I’ve no doubt he’ll have some critiques of their form or style next issue – or perhaps he’ll be able to focus fully on planning for the final confrontation with the Colony.

Ulysses Hadrian Armstrong, teen villain from Tim Drake’s solo title in the 1990s, proves again this issue that he’s a really fun foil for the Boy Wonder. His arrogance and ruthlessness show the difference a mentor like Batman makes in very similar characters and skillsets, and even makes one wonder if the League of Shadows is his own invention to seize power. Batman continues to deny their existence, explaining that they are just Ra’s al Ghul taking credit for other evil things in the world, but the existence of a folder in the government’s hands twenty years ago in the flashback makes one wonder if this is another Court of Owls situation. The continuing mystery of the ultimate foe provides an exciting thread to future issues, though hopefully Tynion has a way of differentiating his story from the many other “secret society” stories that have flooded the Bat-books in the past decade.

Cassandra Cain’s takedown of a huge number of troops solo, and Stephanie Brown’s skill in spoiling enemy’s gear are both extremely fun moments, though one hopes that we’ll get a chance to actually see Cass in action soon, rather than the (admittedly very fun) reveals of her smiling in the wake of a tremendous beatdown. The focus on Kate probably means the upcoming stories focused on Spoiler and Orphan will be their places to shine, though.

All in all, Detective Comics continues to be one of the most exciting, eagerly anticipated books on the shelves, and justifying the bi-weekly release schedule with an excellent balance of action and character.

In Conclusion: Deft character moments and a strong focus on Batwoman’s relationship with her father form the core of this action packed issue.