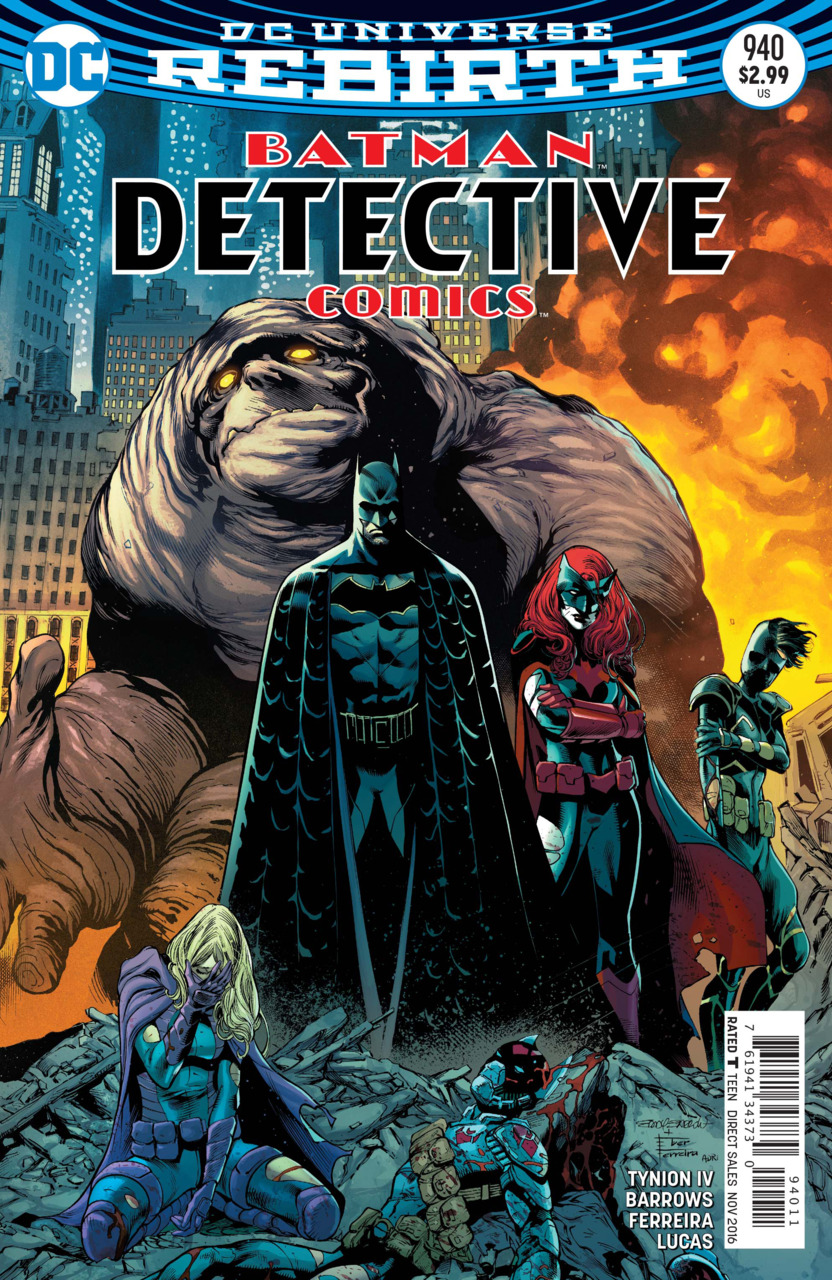 In Brief: Families break apart as the Colony’s attack hits Gotham, and Batman, Batwoman, and their trainees face the ultimate price.

Summary (Spoilers): As Jacob Kane and Ulysses Armstrong learn of Red Robin (Tim Drake) retargeting their drones onto himself, Batwoman (Kate Kane) bursts into their helicarrier. Jacob refuses to fight her, but also refuses to surrender. Ordering his carrier to teleport using alien technology, Jacob prepares to escape, but Batwoman removes him from the bridge of his vessel just before it vanishes.

Batman (Bruce Wayne) desperately tries to reach Tim, who has destroyed the first wave of drones, but has been severely injured. As he sees the second wave in the distance, Tim says his goodbyes, first to Bruce, then to Spoiler (Stephanie Brown). He thanks Batman for everything, and tells Steph he loves her. The second wave fires missiles, obliterating him in a fiery inferno. Batman arrives as the drones announce “Mission Complete,” and the entire Bat-Family stares in shock at the smoke on top of the Belfry. As Batman holds Tim’s staff, Batwoman approaches and tells him Jacob is captured. Instead of turning him over to Amanda Waller’s Argus forces, Batman insists that Jacob will answer for what he’s done.

Later, Steph enters her apartment, and grieves. Batman meets her there to comfort her, but she shows him Tim’s acceptance to Ivy University. Overwhelmed, the two embrace weeping.

Elsewhere, Tim finds himself alive in a dark cell. A mysterious hooded man with a strange staff (who readers of other Rebirth comics will recognize as Mr. Oz) tells him that Tim’s recent reconnections threatened the universe. As Tim insists that he and his friend will fight, Oz leaves him alone in the dark.

In Depth: After months of speculation, changing cover art removing Red Robin from the image, leaked rumors, and fan theories, James Tynion IV brings the first arc of his run on Detective Comics to a smashing conclusion. Though some issues felt understuffed, this one manages levels of emotion and action beautifully, building from last issue’s intense preparation for Tim’s sacrifice to the execution. The desperation of Batman pays off the quiet scene in the second issue of this run (#935) where Batman assures Tim that he was his true partner, and that he wants him to come home. Stephanie and Bruce’s moment of comforting perfectly judges the amount of time required to feel the emotions along with these two characters, as well as continue with the Rebirth event’s wonderful pattern of portraying a Batman who connects with his allies instead of only pushing them away. Tynion clearly gravitates towards this kind of Batman, taking the warmer, kinder portrayals from the best of Chuck Dixon’s run as his model. Lastly, even the reveal of Tim’s survival at the end doesn’t cheapen his choice – he fully expected to die, but forces beyond anyone’s imagining are at play in the DC Universe, giving him another chance to face evil and come out victorious.

Tynion has been accused of writing moral conflicts painting only with black and white, but in Jacob Kane’s foundation of the Batman army, he’s created very complicated moral interactions. While it’s clear that Kane’s mission has lost its way, allowing him to accept, even as he mourns, the murder of innocents to destroy a handful of evil individuals, his perspective as a military man requires him to make those kinds of choices every day, without the luxury of Batman’s “no kill” rule in the field.  While Ulysses Armstrong, The General, displays no conscience, Jacob maintains his belief in the rightness of what he is doing, and attempting to do it in an honorable way. His refusal to strike against his daughter, and his affirmation of his pride in her choices, even when he disagrees with them, bring depth to what could have been a mustache twirling antagonist. Additionally, it remains to be seen if Kane or Bruce is right about the League of Shadows – the black-eyed man of last issue remains a mystery at this point.

Detective Comics has been known for many stunning runs of artwork, from J. H. Williams’s work with Greg Rucka to Jock and Franco Francavilla’s collaboration with Scott Snyder. The rotating team of Eddy Barrows and Alvaro Martinez, along with their inkers and colorists, is approaching these partnerships in style and impact. Though Tynion is focusing on providing a fun story with complex, appealing character interactions and development rather than the deeper thematic preoccupations of Rucka and Snyder, he has the same fortune of artistic wealth at his disposal, and makes brilliant use of it here. Barrows gives each moment and facial expression it’s due, leading to the despair and agony of Bruce and Stephanie in their final scene. His rendering of Tim’s last stand is stirring and tragic, and one can almost hear the soaring movie soundtrack in the lines and colors of his fights.