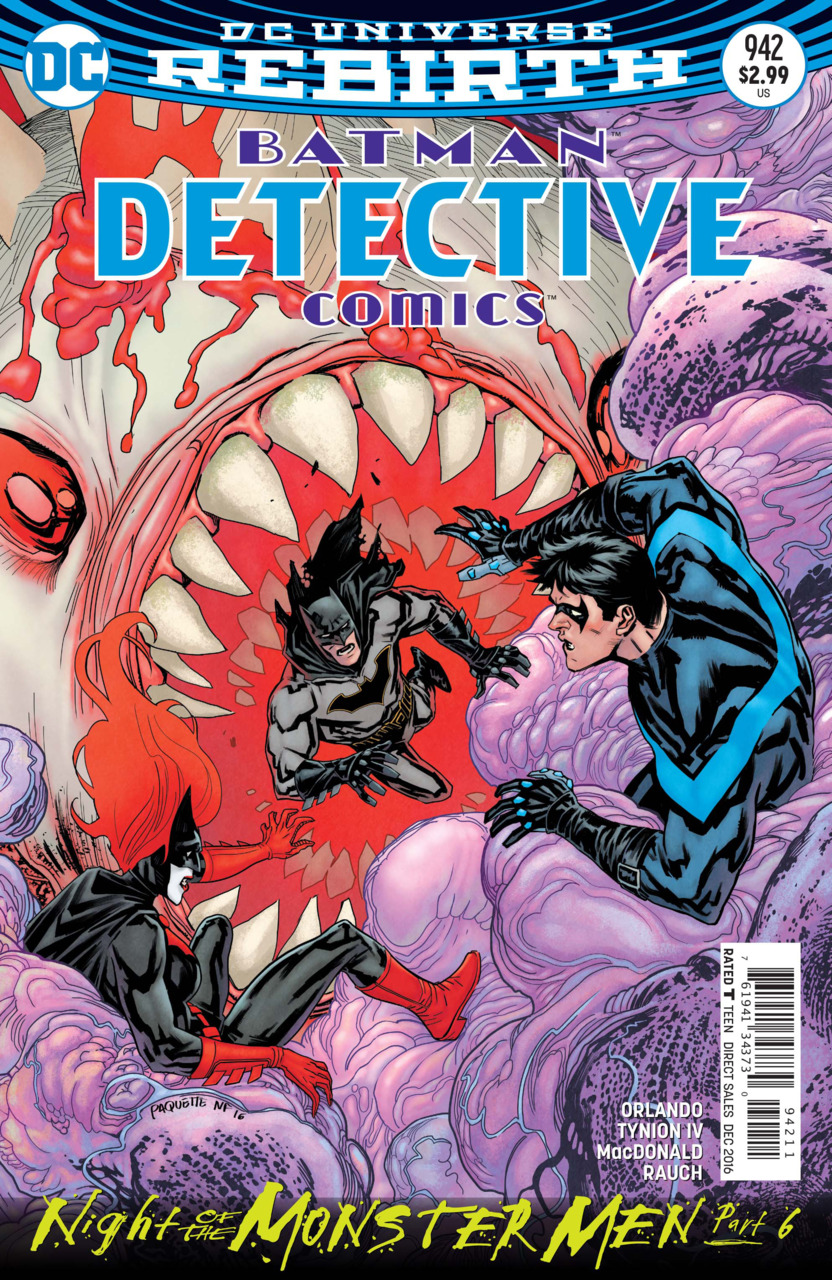 In Brief: Batman and his team face the final confrontation with Hugo Strange and the largest of his Monster Men.

Summary (Spoilers): Batwoman (Kate Kane) leads Nightwing (Dick Grayson), Spoiler (Stephanie Brown), and Orphan (Cassandra Cain) to Batman’s watchtowers to fight the monster men, while Batman (Bruce Wayne) closes in on Hugo Strange. He finds the doctor sitting on a throne of books, dressed as Batman. Before Batman can land a blow, Strange warns that he’s wearing a suicide suit, which will detonate if he receives any hits. Strange reveals his plan to become Batman, the Monster Men lessons for Batman about his psychological inadequacies.

The towers, sporting massive cannons, attempt to take down the final monster, itself the size of a skyscraper. They trap it using cables, and Nightwing dives down its throat to deliver the anti-venom dosage. The monster begins throwing up toxins, but Dick is nowhere to be seen.

Batman and Clayface have managed to seal off the room at the top of Strange’s building, and Batman can hold his breath longer than Strange, leading to victory. Batwoman catches Nightwing as the monster hurls him out. Kate and Bruce muse over the graves of the four corpses Strange used to fuel his monster men, and plan out their next moves…

Three days later, the Justice League joins the boot camp in cleaning up the streets of Gotham.

In Depth: Steve Orlando and Andy MacDonald craft a satisfying finale that returns focus to Batman and his nemesis Dr. Strange. While the rest of the team gets some really fun moments, particularly Nightwing and Clayface, the spotlight belongs to the hero and villain. The reveal of Batman’s plan to knock Strange out using Clayface is hilarious and kind of chilling, with MacDonald’s rendering and John Rauch’s coloring giving Clayface’s maniacal, building-sized grin a great sense of humor and menace.

While the reveal of the watchtowers as massive gun and cable launching platforms is a bit less “Pacific Rim” than if the buildings transformed into giant robots, Nightwing’s dive into the monster’s mouth is incredibly appropriate, taking the acrobat’s solution to transportation, while trusting his team to catch him when he falls. Though Orlando attempts a similar “back to the beginning” approach with the thematic work for Batman vs. Strange, the villain only featured in the first and last issues, leading the element a bit underdeveloped.

A nice job is also done by Orlando in setting up the next arcs in the three crossed over titles. Batman’s trip to Santa Prisca and conflict with Argus and Amanda Waller are seeded all throughout the story, Nightwing’s attempts to find himself outside of Batman’s shadow make a strong showing, and the boot camp’s difficulty in relating to a Gotham devastated by the conflict between the forces of good and evil prefaces the Victim Syndicate. While the Monster Men themselves are a bit shallow compared to the strongly engaging plots and character development in each individual series, it’s provided a nice chance to catch one’s breath before diving, like Nightwing, into the next arc.

Pick up/Pass? A fun issue. Worth picking up if you’ve collected the rest of the series, but makes best sense in connection with the rest.

In Conclusion: Steve Orlando completes the story of Batman and his family vs. the Monster Men with style, even if the entire story feels a bit like filler.