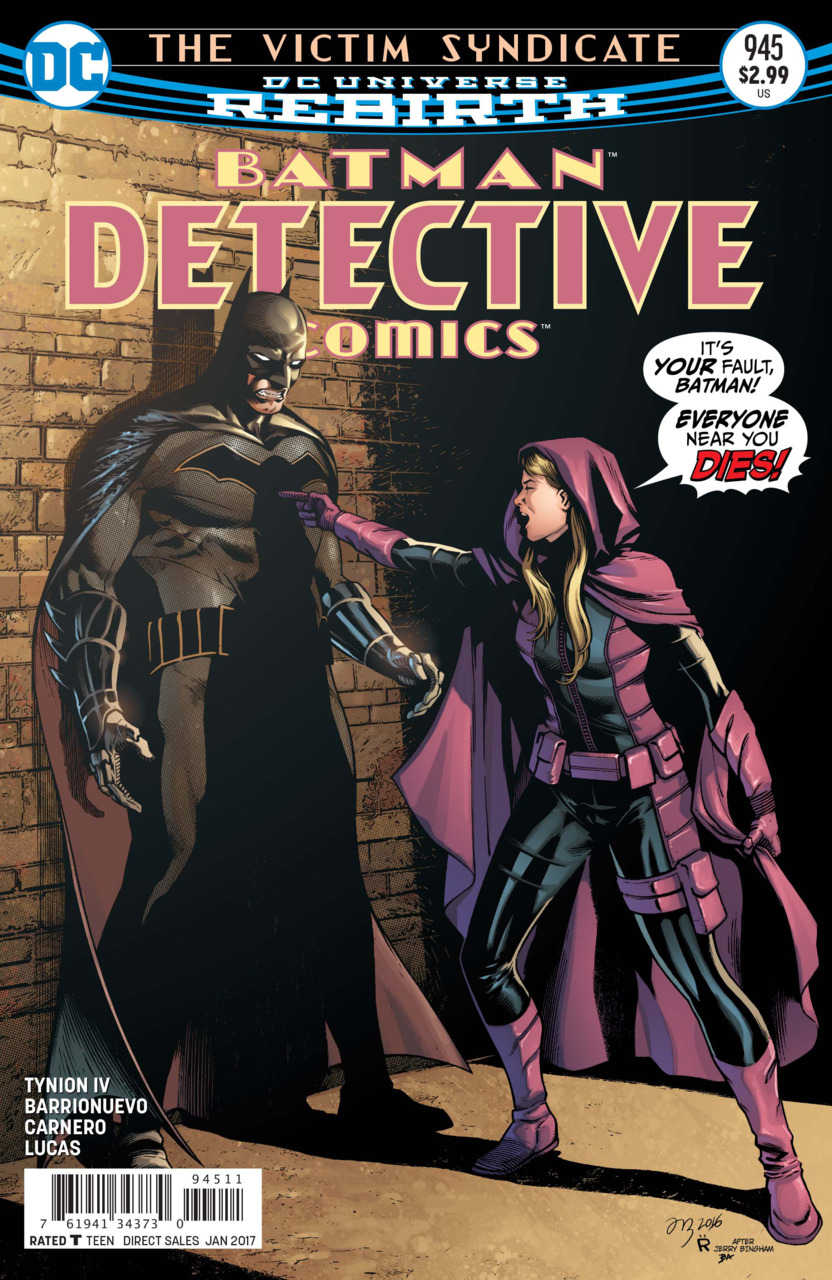 In Brief: Batman and Batwoman’s team desperately attempts to regroup between the Syndicate’s attacks, and Spoiler (Stephanie Brown) feels the stress of the mission.

Summary (Spoilers): After last issue’s cliffhanger of the First Victim visiting Spoiler, Stephanie Brown, in Leslie Thompkin’s Free Clinic as she recuperated from Mr. Noxious’s vicious poison attack, Batman is asking her what she heard. Harper Row and Batman both stress the severity of the Victim Syndicate’s threat to kill people tonight if Batman refuses to unmask. However, Steph is still clearly hiding things, but Batman retreats to confer with Batwoman. They plan to have Leslie run psych evaluations on the team as Kate suggested in the first issue of this arc.

As Batman drives through his city, he talks to Alfred on comms, attempting to remember the first civilian victim of his crusade. Alfred asks if Batman is worried about the integrity of his mission, or is reacting to Tim’s death.

As Spoiler arrives at the roof of the Belfry, she struggles with the emotions of her memories of Tim’s death. She meets Luke Fox, Batwing, upon entering, and she tells him she knows a bit about him from Batgirl. He shows her his upgrades to her suit, including something to protect her against a repeat poisoning.

Meanwhile, Clayface, Basil Karlo, recounts the history of Mudface, Glory Griffin, to Leslie. He drowned her in the chemicals which turned him into Clayface when she tried to stop him in his first rampage. Mudface gave Clayface a photo album of all his victims, and he tells Leslie that while in clay form, his brain lost the ability to recognize morality. Distraught, Clayface questions his place fighting with Batman.

Outside the room, Cass embraces Steph, and Leslie invites Spoiler in. Below, Jacob Kane and the captured Colony soldiers wait away their hours, while Jacob continues to insist that he must speak with Kate. As Batwoman watches the surveillance of the prisoners, Batwing questions why she doesn’t speak to her father. She lashes out, expressing her distrust of his commitment to heroism without having to pay any of the costs the rest of the team have suffered.

At Leslie’s clinic, Harper and Jean-Paul Valley are discussing Stephanie’s attack, and Jean-Paul offers some spiritual advice and comfort, but the Victim Syndicate arrives – the clinic their promised target. Jean-Paul tells Harper to contact the team, and pulls out his flaming sword of Azrael to hold the Syndicate off.

Leslie attempts to get Steph to open up about her losses, but Steph recounts her doubts about the team and Batman’s mission overall. As Leslie probes further, Stephanie realizes that Batman is watching, and uses her knowledge of Tim’s tech to reveal Bruce. She angrily sides with the Victim Syndicate’s argument, and he grounds her as Batwing rushes in to alert them of the attack on the clinic. Alone, Steph walks to the Mudroom, where she speaks to a simulation of Tim.

In Depth: The strain of the semimonthly comic schedule shows again as Al Barrionuevo and Carmen Carnero provide solid, if somewhat unremarkable art, after the excellence of Alvaro Martinez and Eddy Barrows’s art teams. Barrionuevo in particular looks a lot like Barrows’s painted panel style, with shaded linework and a brushed texture to their work.

In the writing department, however, no strain appears at all. James Tynion IV brings the promised focus on Stephanie Brown for this arc – and what a focus it is. Drawing complicated thematic threads from Spoiler’s long history with Batman, as well as from his own work for the past several years in Gotham, he weaves a complicated tapestry of ideas and emotions. From the fascinating insight Stephanie provides into the construction of Batman and Batwoman’s boot camp – that it’s all comprised of heroes or villains who might turn on Batman because of their history – a concept that was well developed in Marvel’s Avenger’s Academy series several years ago – to the tender and sensitive scene between Jean-Paul Valley and Harper Row, it’s clear that a lot is going on here.

On the one hand, it’s disappointing to see Stephanie put herself in the position of outside that she fought so hard against in the pre-new 52 continuity, that eventually led to her tragic (if retconned) death in War Games. On the other, Tynion has clearly read and deeply thought on the history of these beloved characters, and his heavy use of Leslie Thompkins, one of the other major victims of that much regretted crossover, indicates that whatever her relationship to Batman, Tynion is always of Spoiler’s side. One of the reasons Robin, Batgirl, Spoiler, Orphan, and other partners and sidekicks of the Dark Knight exist in creator’s minds is so that the audience can have more emotional fulfillment in following the notoriously grim and unhappy Caped Crusader’s exploits. While we know that any romance between Batman and Catwoman, for example, is almost always doomed in the long run (as Tom King seems to be showing in the current arc of the Batman title currently), the same isn’t necessarily true of Batman’s partners – so we can invest in the happiness of Tim Drake and Stephanie Brown, who share Batman’s mission, but not his baggage. However, when one of these audience focal points is taken off the board, no matter how temporarily, the impact on the characters in the hands of a good writer is enormous. Compare the impact of Tim “dying” here in the Rebirth universe to Stephanie’s own death in War Games. The writers are going out of their way to pay tribute to Tim in natural ways that enhance storytelling, instead of stopping the narrative to blame Stephanie for her own torture and death. Tynion has said that Tim served as the emotional glue holding the team together – and without him, the team is flying apart.

In titles like Trinity, which explore Bruce’s pain and guilt in a way that completely serves the story, to here in the central title of Detective Comics, where Tim’s “death” was shown, all the characters are given time to react to Tim’s death without slowing the plot down. Short sequences like Spoiler’s entry into the Belfry, or her flashback to Tim considering college with her, give intense emotional impact while still allowing the tense, dark threat of the Victim Syndicate to pick up speed. Special credit to the art team for their expressive rendering of Spoiler in these sequences, easily matching Alvaro Martinez’s body language in the first issue of this arc, or Batman and Spoiler’s embrace after Tim’s death.

Though Stephanie’s absence from the cover of Detective Comics #950, when the rest of the team is highlighted, concerns this Spoiler fan, there’s always room for hope when this heroine is concerned. If even death and continuity erasure couldn’t keep her down, a few philosophical disagreements and lost loved ones certainly won’t.

In Conclusion: As the Victim Syndicate sows disruption in the team through Stephanie, already fractured by the death of Tim Drake, Batman and Batwoman struggle forward.