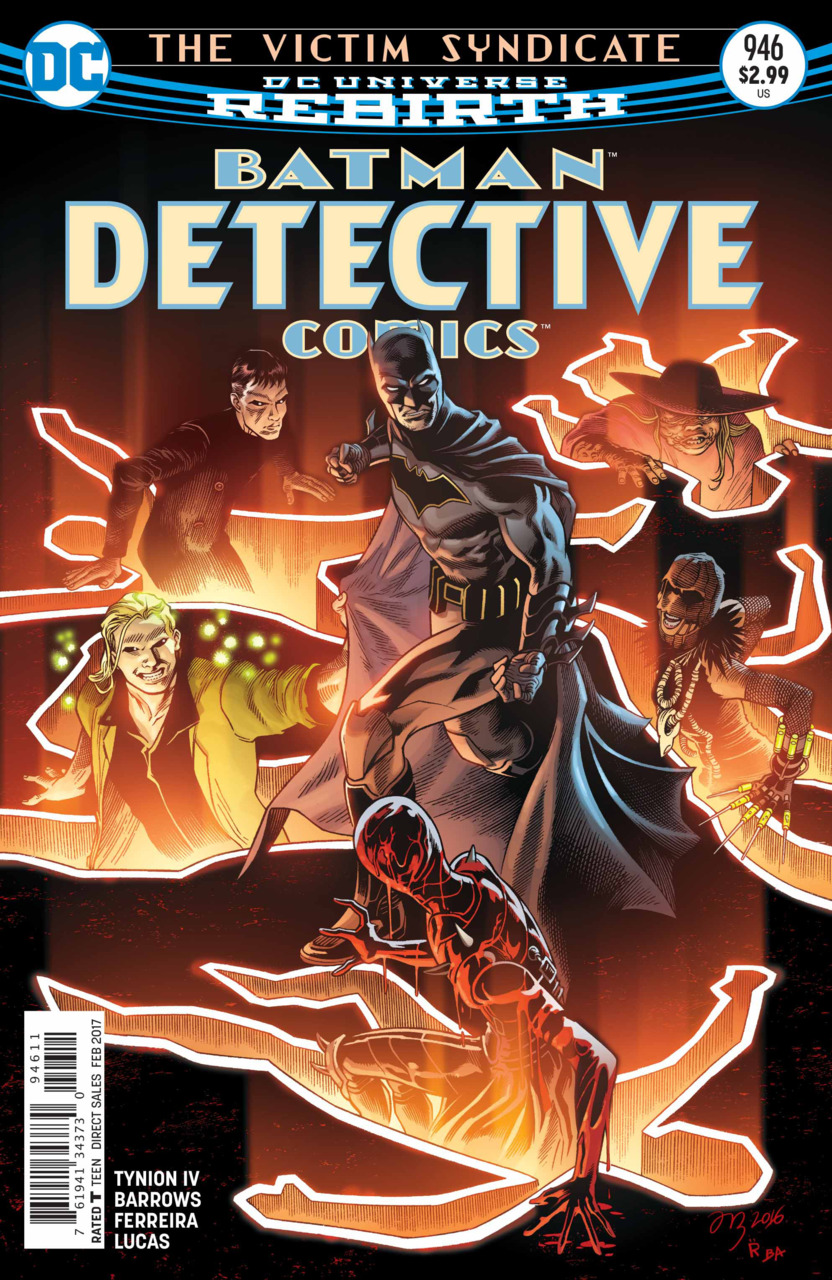 In Brief: As the Victim Syndicate attacks, Batman and Spoiler face their own demons.

Summary (Spoilers): Three months ago (according to the datestamps from the first issue of this arc, that would be January 2016), Bruce and Tim surveyed Old Wayne Tower, future site of the Belfry. Tim questioned Bruce’s choice to form a team, and enthuses about the potential to take proactive steps to remove the suffering of Gotham, instead of merely reacting to crime with punching. Bruce asks Tim to remind him to trust, reach out, and see the big picture, and Tim promises he’ll stay by Batman’s side.

In the present, Batman, Orphan, Batwoman, Batwing, and Clayface plan their response to the Victim Syndicate’s attack on Leslie Thompkins’s Free Clinic. They each take a floor, Batman meeting Azrael on his level, praising him for doing his job in protecting the clinic, and tasking him with evacuation. Once Jean-Paul has left, Batman demands the Syndicate show themselves, and the First Victim steps out of the shadows. Batman pleads with the First Victim to let him make things right, but the villain responds that Batman will have blood on his hands by the end of their plan.

As Azrael evacuates, Harper Row texts Steph to check up on her. Steph deflects her friend’s concern, and turns to the Mud Room simulation of Tim in Red Robin gear. Though the simulation cannot truly understand her, she uses it to express her grief and anger at the wrongness of the world. She reveals that the First Victim asked her one question in Tompkins Clinic: Why does she fight? The simulation cannot comprehend her history and question, but does manage to ask Steph what world she wants.

Clayface confronts Mudface, capturing her through the bracelet created for him by Tim which allows someone altered by the Clayface chemicals to reform their original body. Though the bracelet proves a trap, Clayface expresses his sorrow and repentance to Glory, the woman he turned into a monster. Batwoman easily takes down Madame Crow, and Batwing uses nanobots to incapacitate Mr. Noxious. Orphan stops the Mute in his tracks with a recording of his wife’s last message before the Joker murdered her. Their team decimated, the First Victim roars in frustration that Batman refuses to fight them. However, before the police can come finish the job, Spoiler appears, overloading the team’s comms and proclaiming her intention to fix the world.

In Depth: Tynion and Barrows prove once again why Detective Comics belongs on everyone’s list this year. From the incredibly solid linework (no wonkiness from two issues ago), to the always creative panel layouts and camera angles, Barrows provides the big picture skill to tell this dark and exciting story. Additionally, the writer and artist collaborate on small but key details, like the page turn from Steph pondering the question, “What world do you want?” to Clayface pondering a colorful collage proclaiming “A World of Peace and Love.”

In the promotional interviews Tynion gave during the leadup to this arc, he promised that Stephanie Brown would star – and for a few issues, it looked like she might only have a small but key moment in this story’s conclusion. However, this issue kicks Steph’s involvement into high gear – and in some of the most fascinating choices, Rebirth’s Stephanie’s continuity into a reclamation of her own legacy from over twenty years ago, when she was created by Chuck Dixon as a hero who constantly faced marginalization from Batman and Robin. Here, Stephanie faces the big question of what does a hero do after they pass the initial phase of inspiration from Batman, and discover that the fight against evil is eternal, and causes just as much pain as inaction. However, instead of allowing Batman to dictate what she can and cannot do, she has made her own decisions – decisions which place her outside the circle of trust and family Batman has painfully, clumsily, and precariously built over his years as Gotham’s Dark Knight. Tynion has taken the status quo Spoiler initially faced – on the outside looking in – and given her ownership of it. No longer is Stephanie Brown a wannabe hero rebelling against various father figures. She now takes her place as someone who’s looked into the onrushing storm of evil, and planted her purple boots in the middle of Gotham and refused to move.

Tynion does a fantastic job of showing Batman’s evolution as a character, too – instead of reacting to the death of Robin by actively driving all members of his family out of the city, he has attempted to suppress his pain and rage, and instead still tried to fulfill the promise he made to Tim at the beginning of the issue – to reach out, to listen. In the way he deals with the First Victim as well as how he will have to handle Stephanie, he’s not the Batman who refuses to listen and respond. And that, I believe, will provide the foundation for why Batman is a hero, and not the villain the Victim Syndicate claims.

Next issue brings the second storyline of the Rebirth Detective Comics to a conclusion, and several things will likely occur. Stephanie will probably leave the team, at least for a time, as she is conspicuously absent from the all-team cover of #950, in a few months – but Tynion has promised that her story doesn’t end here. The Victim Syndicate will probably be exposed as the terrorists they are, especially the likely fraudulent First Victim – though whether Stephanie will do that unmasking, or it will occur another way, is unclear. Lastly, a lead-in to the League of Shadows will likely appear somewhere in the closing pages, as it’s highly likely that they have instigated the Syndicate’s attacks, if they aren’t directly responsible.

Pick up/Pass? Definitely a pick-up – strong character writing and penciling make this issue meet the incredibly high quality of all issues of the series.

In Conclusion: Tynion and Barrows put all the pieces in place for a killer finale as Batman’s team confronts the Victim Syndicate.