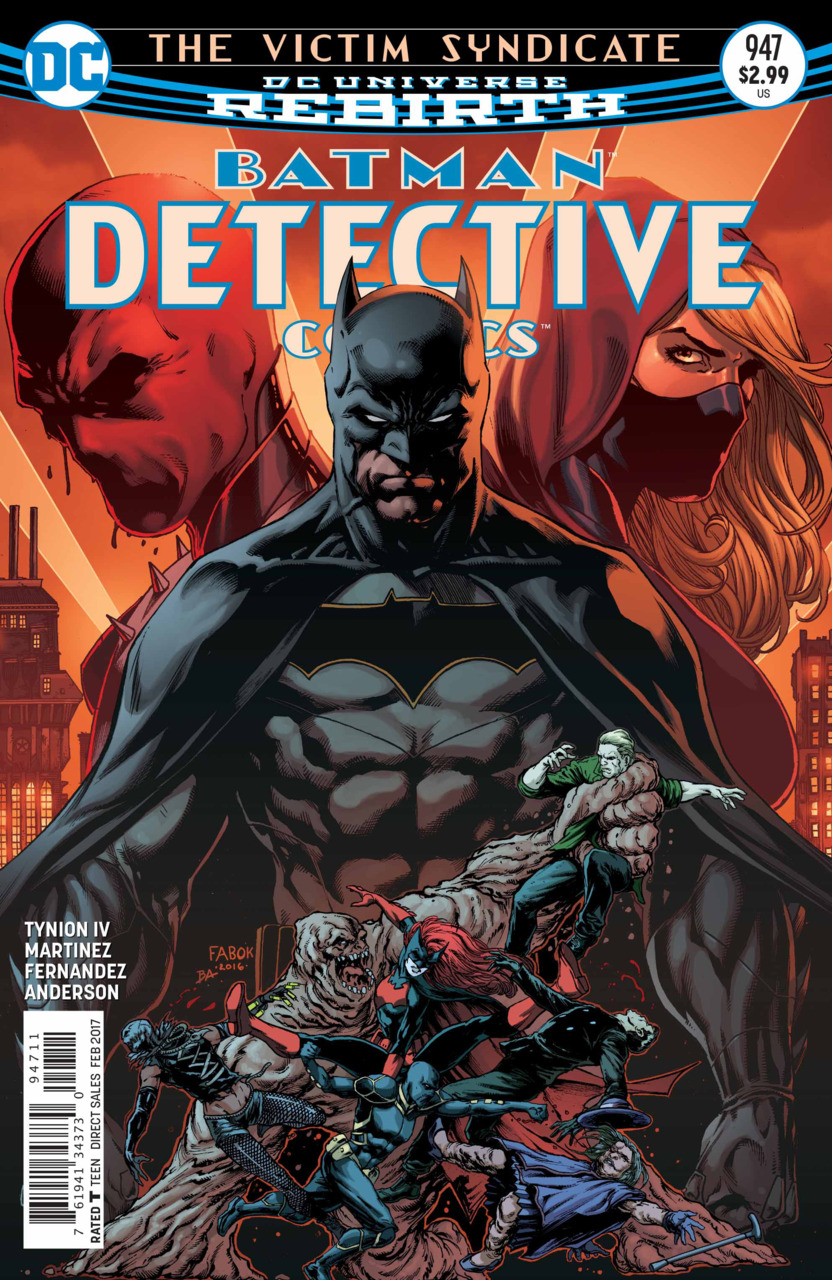 In Brief: Stephanie Brown, the Spoiler, sets herself against Batman and the team to try to create a better world.

Summary (Spoilers): Batman and Batwoman’s team faces Spoiler after their takedown of the Victim Syndicate, stunned at her attack through their comms last issue. She takes down Luke, Kate, Basil, and Cass very quickly  using countermeasures she developed or discovered with Tim. However, Batman remains, and asks how she plans to beat him. She scoffs at the notion, and challenges him to hurt her after what happened to Tim. The First Victim cackles, thinking Steph is on their side, but Steph punches them viciously in face, rejecting their murderous tactics. She declares that Spoiler is on Gotham’s side, and that though the Victim Syndicate is wrong to murder people to stop Batman, the vigilante games and costumes do more damage to Gotham than good.

Batman pleads with the Syndicate and Spoiler to let him help them – that he is sorry for not helping them when they were hurt. Steph offers an ultimatum: shut down the Batman and all his allies, or she will expose the entire network to the public. She paints a picture of a world where Cass lives a normal life, Clayface is cured, Kate is in charge of the police, and Tim is in college. Batman says the world doesn’t work that way, and Steph pleads with him to give it a try.

Luke, out of his armor Steph sabotaged, shares his story – a childhood of wealth and luxury, but he sought out Batwing when he heard of another black kid being killed by police unjustly. He embraces Batman’s response to the broken system: “one life at a time.” Clayface agrees, wanting to redeem his monstrous past. Cass begs with Steph, but she insists it’s not enough. Kate destroys Steph’s phone, stopping her threat to expose the team to the world, and Steph flees, vowing to stand in Batman’s way.

Three days later, Basil visits Mudface, Glory Griffin, in Arkham. He promises to visit consistently, trying to make up for his destruction of her life. Bruce and Kate view the First Victim, whom they could not identify. Batman admits that he was pulling back after Tim’s death, but commits to continuing Tim’s vision of expanding their capabilities beyond reaction. Kate has come to a new perspective on Luke, and they also agree to add Jean-Paul Valley, Azrael. Bruce also urges Kate to talk to her father, not for any information, but to help heal her own spirit. As they leave the Asylum, Kate asks if Bruce thinks Steph will come back. He says she’s already acted to sabotage the Batsignal, but that her threat to expose Batman was a bluff. Though he cannot agree with her vision of the world, Bruce says he should have let her and the team grieve Tim’s death, and that he believes they will all be working together again soon.

MEANWHILE, Tim manages to escape his cell in Mr. Oz’s prison, desperately trying to get a signal out to Batman, but is distracted by something the audience cannot see. He is instantly teleported back to his cell, while Mr. Oz watches and promises he will soon understand.

In Depth: The second full arc of James Tynion IV’s run on Detective Comics has concluded, and firmly cements itself as one of the top Batman titles of the past several years. Building on the characters, relationships, and questions he’s developed over one and a half years of weekly titles in the two Eternal miniseries, Tynion has created a Bat-family worth watching, both for his excellent craft in writing, as well as his stellar artistic partners.

With the conclusion of The Victim Syndicate arc, Stephanie Brown exiles herself from the team because she wants a world where people aren’t hurt in the battle between Batman and his enemies. Though Tynion has fallen a bit into the trap of having a heroic character being told by another heroic character to stop doing all the fun things we love to read about, his reasons for doing so hold up well. As many fans have pointed out, Tynion loves the Bat-family from roughly 1993-2003, from Knightfall to Bruce Wayne, Murderer?, and most of his writing choices move the characters and their relationships towards that era of characterization. From Tim and Stephanie’s romance, to the reintroduction of Steph, Cassandra Cain, Jean-Paul Valley, and many others, Tynion has built up the Bat-family to his golden age. One thing, however, remains in the way: Steph, as introduced in this run of Detective, is a valued member of the Bat-family, trained, equipped, and encouraged. In the 1990s and 2000s, Steph was a marginalized figure – constantly told she wasn’t good enough by Batman, Robin, and nearly everyone else (Black Canary being a shining exception). Tynion is faced with the dilemma of how to marginalize Stephanie without destroying her relationships or competence – and does so masterfully. By extrapolating from a plot point required by the DC Universe Rebirth overarching storyline – Tim Drake’s “death” – he destabilizes Steph’s confidence in Batman’s mission in a psychologically believable way, and has her choose to marginalize herself in a way that sets her up as a semi-independent actor in Gotham. Stephanie makes the choice this time, not Batman, and Batman allows her to leave, instead of demanding she stop or silencing her. Though fans of the character, like myself, are worried about Steph’s immediate future in the titles now that she’s left the team, this story has been nothing but complicated and rewarding character development.

However, it would be dishonest to say that the arc, and Steph’s character, have been overwhelmingly successful with fans. While most reviews have been extremely positive, fan commentary has been much more mixed. There’s a sense that the trope of a character telling our favorite character (Batman) to stop doing the things that we read Batman comics about renders the antagonistic character (Steph) annoying. And she is, as a narrative device. Should Tynion have chosen such a divisive narrative strategy? It depends on his goals. As I hope I’ve shown above, Tynion has ambitiously attempted to recreate an entire era of Batman family stories and status quo, and this arc is a huge step in that direction. A lot will depend on whether the payoff to this broken relationship between Batman and Spoiler pays off in the long run, if Bruce’s hope that they all fight together is fulfilled.

Alvaro Martinez and Raul Fernandez, two of Tynion’s most consistent collaborators throughout the two Eternal series and this run on Detective, provide stunning visuals to conclude this small scale but intense story. The page where Stephanie’s Spoiler costume provides the layout for the panels mirrors the gorgeous beer-glass page from the first arc, and Martinez and Tynion must have collaborated to mirror the heartbreaking hug between Batman and Spoiler from Detective Comics #940 in the scene where Batman challenges Stephanie to be him, as the profiles and coloring clearly shows in devastating parallel how badly these two have come to miscommunicate with each other. Though Tynion has said that the next arc will likely use guest artists, to allow Martinez and Eddy Barrows time to follow Tom King’s Batman model, with each artist completing a full arc, instead of alternating every one or two issues, Martinez’s brilliant art and clean lines will be sorely missed.

Lastly, some fans have consistently said that Tynion’s Detective Comics is not a Batman comic, since he’s not the main character. Batman’s development through this arc is at least as important as Stephanie’s, as his rededication to the team proves. Tynion clearly has writers such as Chuck Dixon in mind for his Batman – someone who makes serious mistakes, but admits them when he realizes them and acts decisively to correct them. Here’s to hoping he gets a long run to re-affirm this vision of Batman in the minds of the fandom, after many years of a Batman too broken to form connections to his family.

Pick up/Pass? An extremely smart, beautifully illustrated conclusion to a dark, personal arc is absolutely worth picking up.

In Conclusion: Spoiler strikes out on her own, as Batman and Batwoman attempt to pick up the pieces of the Batfamily.