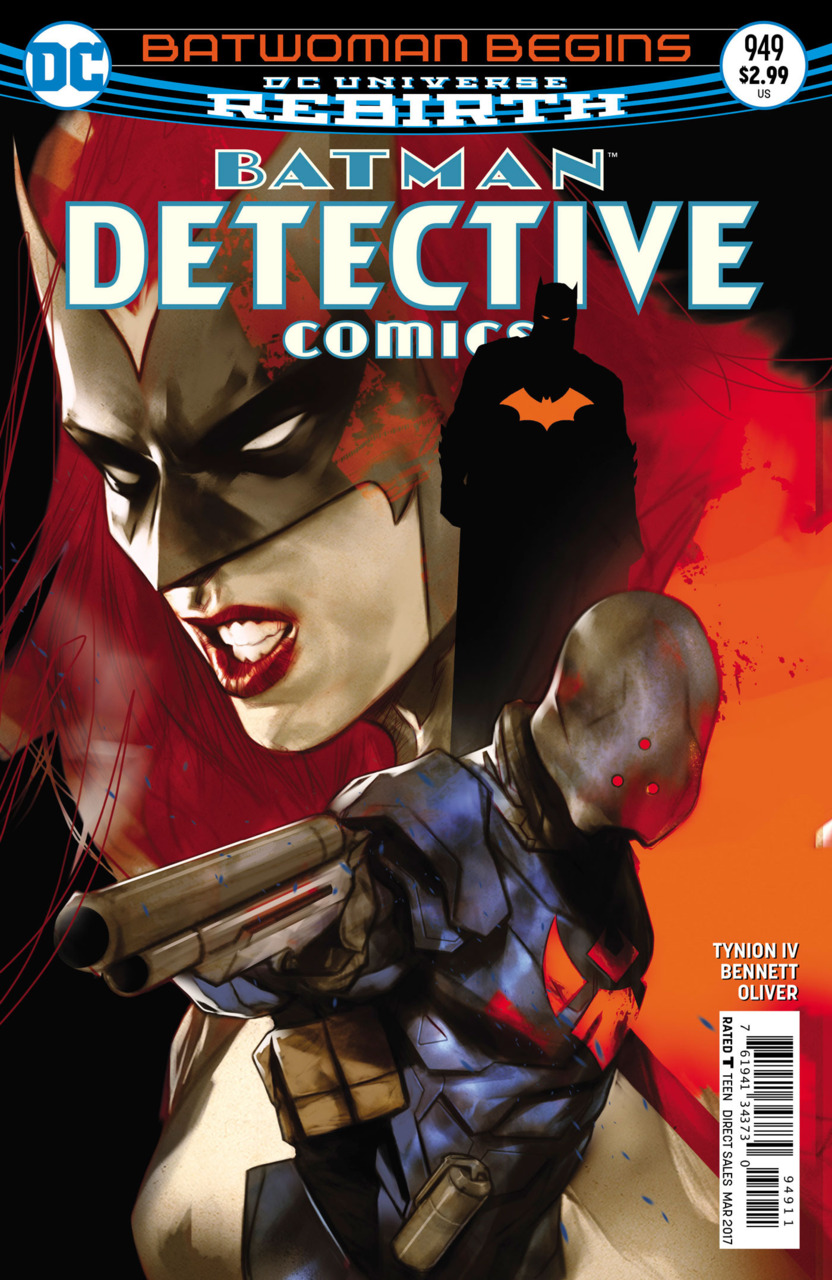 In Brief: Batwoman comes to a decision point in her past and present as she faces Batman and Colony Prime.

Summary (Spoilers): Two years ago, Kate eats noodle soup while reviewing footage of Batman’s fighting style. However, Batman himself sneaks up on her and demands to know her intentions. Using her soup and service pistol, Kate defends herself against her intruder before realizing it’s Batman. They tussle a bit more, then Batman runs down Kate’s history, and Kate explains her reason for being Batwoman – to serve in the way she was denied when she was expelled from the military. Jacob and Colony Prime, Simon Samuels, watch the encounter without Kate’s knowledge. Prime is very dismissive of both Kate and Batman, saying she needs to be a soldier, not a superhero.

In the present, Prime has taken control of the Belfry and fights both Batman and Batwoman. He appears to take down Kate, and tells her the base will do his work for him. He communicates with Jacob Kane by radio, and takes down Batman in the brig. However, he realizes too late that he’s ended in the Mud Room, and Kate uses many duplicates of herself to subdue Samuels. Outclassed, Prime flees, but is stopped by Batman. He delivers a message to Jacob, that the Many Arms of Death hold a new weapon, and that the Colony is losing the Eastern Front, then uses the venom to make himself into a monster and escapes. Kate reveals that she deduced Bruce’s identity when he limped after she shot him in the leg, and she maintained her own mission of ending war, instead of Batman’s of ending crime.

Later, speaking to Jacob, father and daughter negotiate a painful truce. Jacob knows that he cannot ask to be released, as it will destroy his already very tenuous relationship with Kate, so he agrees to help her stop the sale of monster venom on the condition that he gives information only to Kate.

In Depth: James Tynion IV and Marguerite Bennett bring “Batwoman Begins” to a solid conclusion, launching Bennett’s Batwoman solo series, and continuing Tynion’s development of Kate’s character and relationship with the cast of Detective Comics, as well as furthering the character of Tim’s base of operations, The Belfry. The characterization and relationships that Tynion’s been developing between Kate, her father, and Batman, show the richness of these characters and Tynion’s skill in developing them. Though some have criticized Tynion’s turning Jacob into a villain for being unexpected or too black and white (lacking moral ambiguity), it’s clear that while Tynion enjoys his action movie style good vs. evil battles, his take on the Wayne/Kane family has all the nuance one could wish for, if you only look.

To start with, though Jacob does have his own agenda for the world through the Colony, it’s clear that he cares deeply for Kate, and respects her choices and goals, even though he disagrees with them. Furthermore, he has not taken the easy steps to destroy Bruce’s mission as Batman, even though his power and knowledge make that an easy option. Lastly, his mission in the world is to make it safer – Kate’s choice to serve clearly has roots in his own and her mother’s service, and not just in her trauma. While Tynion clearly intends us to disagree with how far Jacob has gone in pursuing his goal, Jacob in this series has never pursued selfish ends in his work for the Colony. Additionally, though Hayden Blackman and J. H. Williams III smoothed over Jacob and Kate’s relationship during their run on the Batwoman title during the new 52, Greg Rucka clearly intended a darker turn for the two in the conclusion to Elegy. For this reason, Tynion’s retcon reveal of Jacob’s leadership of the Colony came as a natural development of the secrets Jacob kept “for Kate’s own good,” just like the survival of Kate’s twin Beth.

Though, naturally, it’s impossible to tell for certain which parts of this two-parter were written by Tynion and which by Bennett, based on Bennett’s writing for the Bombshells title, some of Kate’s speeches show the influence and themes from Bennett’s characterization of the Kate Kane character in that universe. Tynion has a penchant for similar speeches, perhaps stemming from his training by Scott Snyder (who also trained Bennett), but it seems like there were a bit more in this issue, which left it feeling a bit less organic than the previous two story arcs. However, it also crystallized the differences between Batman and Batwoman very nicely, and made this two-part arc very digestible on its own and as the kickoff for Bennett’s take on the character.

Ben Oliver again handles linework for this issue, though the constraints of a semimonthly series appear to have hit this issue, as Oliver shares color duties instead of performing solo, and two pages of fill-in art appear by Szymon Kudrandski. On the whole, though the fill in art and color work isn’t as cool and polished as Oliver’s work last issue, the art continues Detective Comic’s line of highly appealing, traditional with flair approach to one of the two central Batman titles being released.

Pick up/Pass? A solid story, developing the structures and relationships of the world of Detective Comics. Well worth picking up, both as the conclusion to a fun two-part series, a continuation of Tynion’s run on the title, and a prelude to Kate’s upcoming solo series.

In Conclusion: Tynion, Bennet, and Oliver do a solid job of bridging Tynion’s work with Bennet’s forthcoming series, fleshing out Kate’s history and purpose.