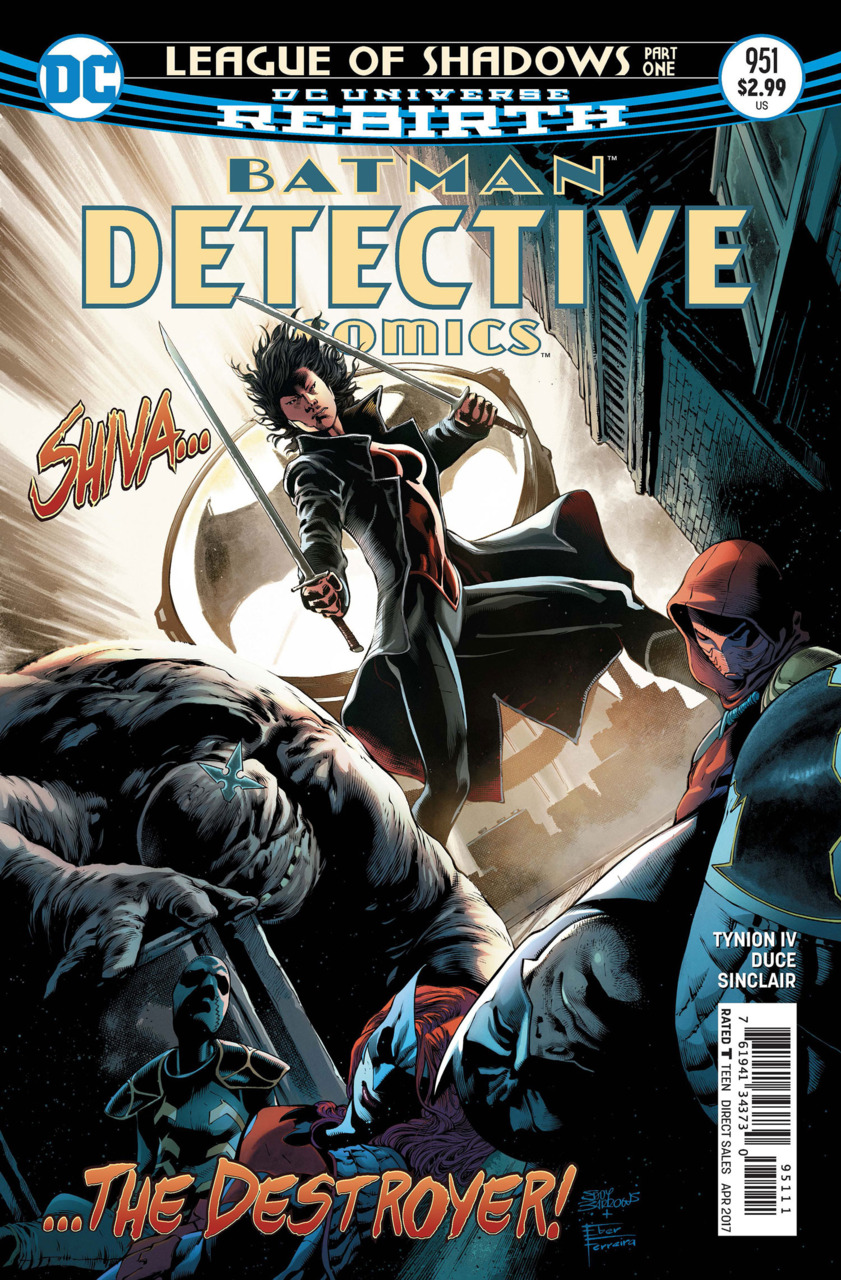 In Brief: Lady Shiva launches her campaign against Gotham and an unsuspecting Batman, Batwoman, and their team.

Summary (Spoilers): Three months ago, Lady Shiva captured and skewered a Colony soldier with an absurd number of swords. Faced with her mercilessness, the soldier told Shiva that Batman forced the Colony out of Gotham. Slitting his throat, Shiva orders her men to move immediately.

Now, in Gotham, Batman patrols while Batwoman runs the team through a Kung Fu Penguin simulation in the Mud Room. The city is quiet, since Batman’s cooperation with Mayor Hady has reduced crime to a minimum. Cass proves herself MVP of the team in the Mud Room, leading Bruce and Kate to discuss their concerns about her after Stephanie Brown’s departure during the Victim Syndicate’s attack. They plan to take Cassandra out for more events as herself, not in costume, but Batman finds Mayor Hady dying in his office, skewered by another absurd number of swords, this time with Bat-themed hilts. Hady’s last words are “Shadows. League of Shadows,” then police burst in, sizing Batman up as the murderer. Batman gets away, but takes a shot in the shoulder escaping.

In the Belfry holding cells, Jacob Kane tells Bruce and Kate that the League of Shadows has started their game. Though Batman insists that Jacob is merely rationalizing the attempted murder of 300 civilians, Jacob insists that he’s not a villain. Kate believes him, but before they can progress, Luke shows the team a video of two news anchors being murdered by Joker toxin on air. They notice another gas attack in the city, with a riot breaking out. Batman and Batwoman lead the team out, but Cass notices that the rioters are pretending. As the mob turns on the team with swords in hand, Luke asks Bruce what’s wrong with their eyes – which are completely black, just like the man Cass saw in the evacuation during the Colony attack months ago.

In Depth: Detective Comics picks up the story thread of the League of Shadows from Rise of the Batmen. Bruce still denies it exists, but at the end of the issue, there’s no denial possible anymore. Tynion kicks off his arc re-introducing Lady Shiva to the Rebirth continuity erasing much of the New 52 version of the character, definitely for the good so far. Hopefully, her mastery of martial arts will return, instead of the emphasis on bladed weapons and cruelty seen dominating her appearances in this issue.

Christian Duce provides art for this issue, giving regular artists Alvaro Martinez and Eddy Barrows time to complete their own arcs coming up, as Tynion has promised. Barrows does provide the cover, showing Shiva facing Orphan and Batman. Duce, a frequent collaborator with Tynion in the Eternal series, provides solid work, but hopefully guest artist Marcio Takara will provide the bulk of the issues, since he’s done such stellar pencilling in his two issues with Tynion previously (Batman and Robin Eternal #13 and Detective Comics #950, last issue).

Pick up/Pass? Definitely pick up, as Detective maintains the high quality the series has developed for the past six months.

In Conclusion: League of Shadows kicks off in earnest, as the assassins are “Unleashed” on the team.