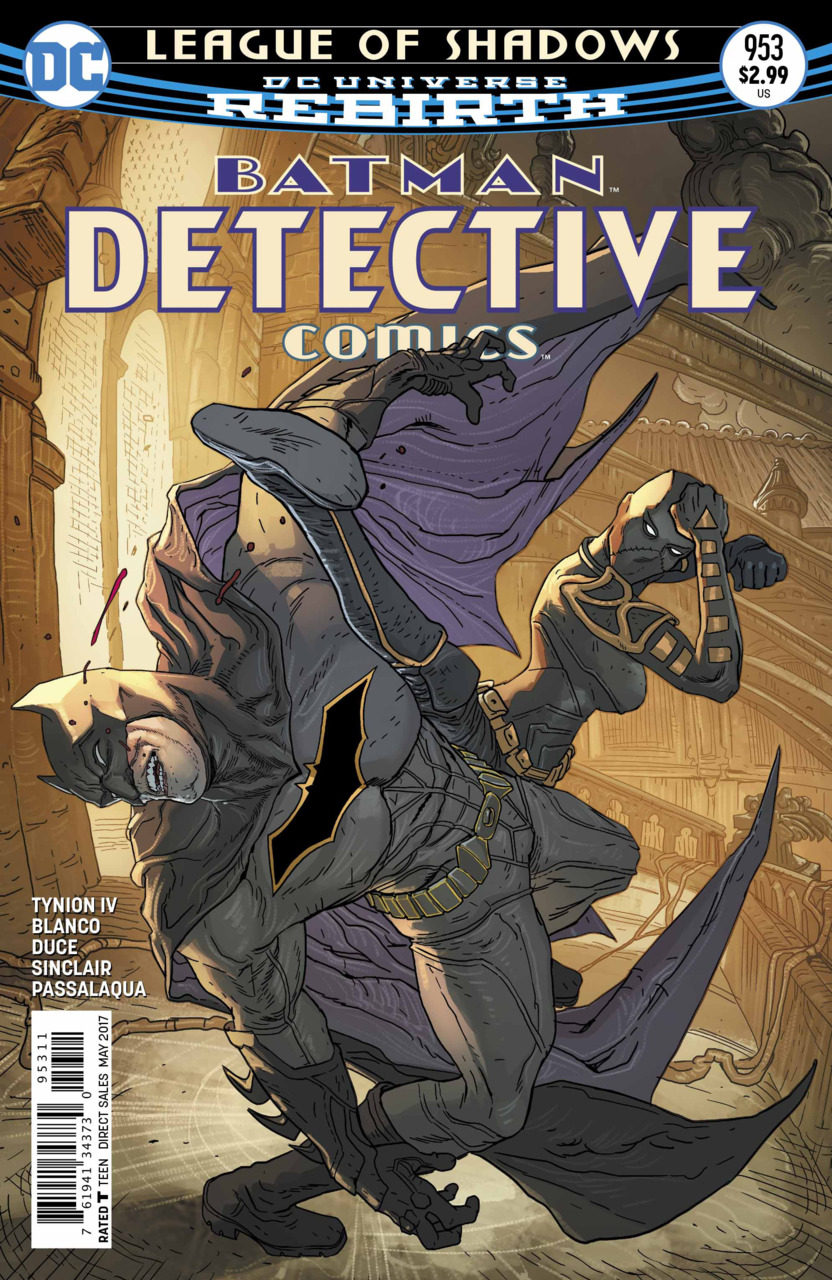 In Brief: Cassandra Cain, the Orphan, struggles with her identity as her mother, Lady Shiva, begins her assault on Gotham.

Summary (Spoilers): A Hawai’ian shirt-clad Commissioner Gordon arrives back in Gotham, where Renee Montoya has arranged a surprise covert helicopter meeting with Batman and Batwoman. Jim believes the Joker is behind the attacks, but Batman and Batwoman tell him that it’s not the Joker, and he needs to evacuate everyone immediately.

Meanwhile, Cass views the carnage Shiva causes as she remembers her training with the first Orphan, her father, David Cain. This particularly memory reveals her confrontation with Cain over her birth mother, who Cain lies to her about, saying that there’s no comfort at the end of Cassandra’s road. Clayface breaks in on her reverie, since Batman and Batwoman put him on Cass-sitting duty. He offers what comfort he could, giving her a book of Shakespeare’s works, which was his own method of coping. He tells her he’ll let her go, and she embraces him before leaping out the window. As Clayface calls in Orphan’s trajectory, the he sees Shiva’s ninjas enter the Belfry.

Batman intercepts Cassandra, telling her he wants her to stand down for her own safety. She insists her name is Orphan, but he tells her she doesn’t have to be her father or mother’s daughter. She beats Batman brutally, but he refuses to fight back, saying he believes in her. She responds by kicking him off the roof, and vanishing. As Bruce climbs back up, Alfred radios in a disturbance at the cave, but the transmission cuts off violently.

At the same time, Batwoman calls Batman from the Belfry, telling him Clayface couldn’t stop the League of Shadows. They attack her from behind, and drag her to the cells, where they stab her with a katana in the belly in front of her father.

Orphan, in the center of Gotham, shouts for Shiva. Her mother arrives, and Cassandra rips off her masks, asking why her mother abandoned her. Shiva deduces that David Cain executed the experiment he told her of – teaching a child body language as their first language. She promises to give Cassandra the answer she seeks if she will fight to kill. Cassandra fights, but still refuses to resort to lethal strikes, leading to another curb stomp. Shiva dumps Cass down a manhole before heading off to deal with the rest of the Bat-Family.

Batman rushes to the cave, where the Batcomputer displays the defeat of Batwoman, Clayface, and Orphan. His distress only increases when Ra’s al Ghul arrives with a mighty-looking minion…

In Depth: James Tynion and his artistic collaborators, Fernando Blanco and Christian Duce, continue to produce stellar work. Tynion gets to the heart of his focal characters for this issue – Cassandra, Clayface, and Batman, and gives significant moments to the supporting members of the team. Duce and Blanco have traded places from last time – Blanco doing the lion’s share of the art, and Duce putting in strong work to complete the issue. James Gordon’s vacation attire and irritation provide an amusing contrast to start the issue off with a bit of levity – helpful, considering the intensity of the action and emotional struggle Blanco draws in the rest of the issue. Blanco’s fight scenes are particularly noteworthy, with excellent choreography and appealing heavy lines defining the characters.

We are now at the halfway point of this arc – League of Shadows runs from #950’s prologue to #956. Some plot points are fairly clear at this point – Ra’s will likely form a temporary alliance, then back stab Batman (or get quickly taken down by Shiva just like he did last issue). We know Cass will take on the entire League and win – but the biggest question looking forward is: What will Cassandra Cain’s fate be in the end, as she faces her mother in the finale? James Tynion has been rotating his team in both arcs – first Tim Drake, then Stephanie Brown, have left, with Luke Fox and Jean-Paul Valley replacing them. So, will Cassandra be the next to go? Here are some arguments for and against:

Pro (Cassandra will stay on the team):

Con (Cassandra will leave the team):

Obviously, this reviewer both believes and wants Cass to stay in Tec. If she does leave, it seems likely that one by one, Batman’s teammates will fall away until Tim returns in the Rebirth event (whenever that is) to bring the family back together.

Pick up/Pass? Detective Comics continues to provide one of the strongest stories in the Batman books – definitely pick up.

In Conclusion: Lady Shiva takes down the majority of the team, leaving Ra’s al Ghul in a good negotiating position with Batman.