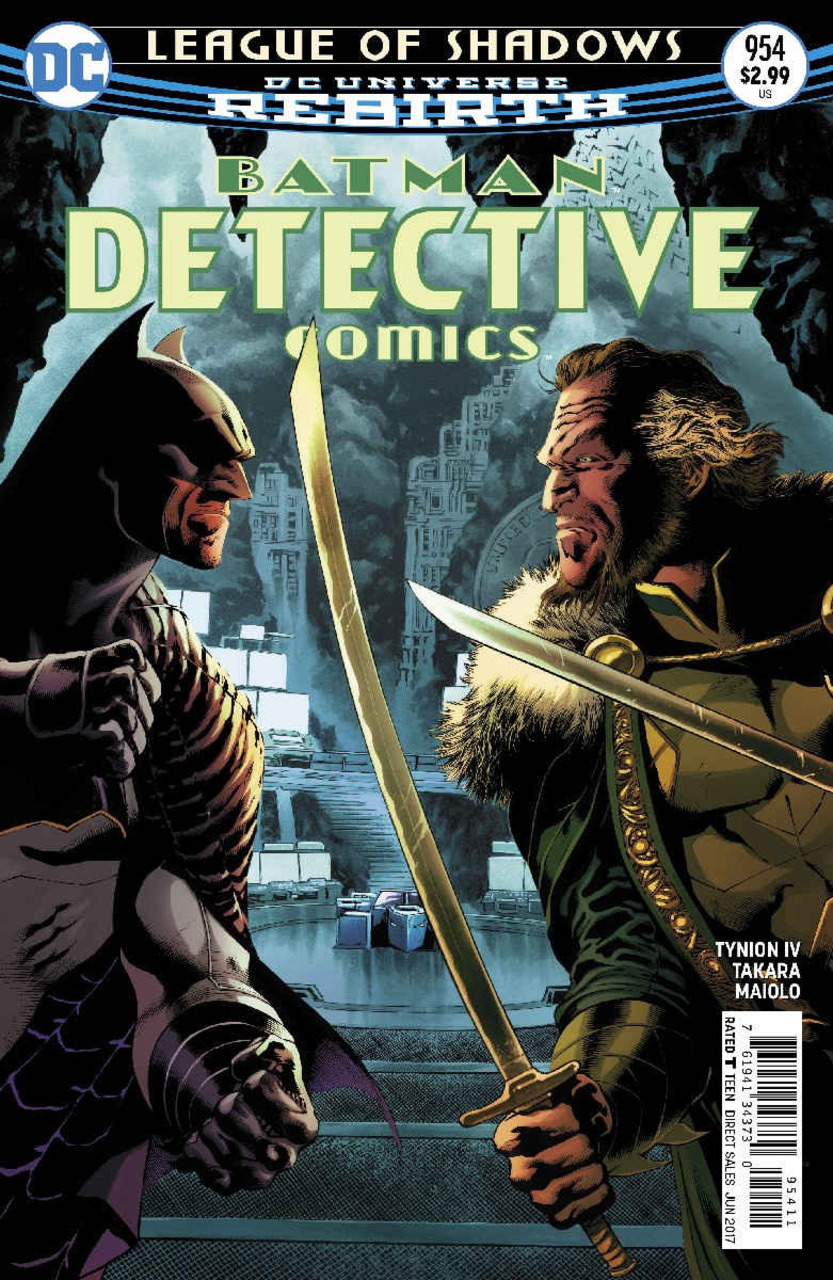 In Brief: Ra’s explains why Batman isn’t the worst detective after all, as the history of Shiva and the League of Shadows is revealed.

Summary (Spoilers): Batman opens our issue demanding that Ra’s tell him where his team is. Ra’s tells him that his team is likely dead, and Batman puts the villain in an energy cage after defeating the bodyguard Ubu. Ra’s tells Batman he’s not here as an adversary, and that the League of Shadows is not under his control. He then reveals that Batman’s belief that the Shadows do not exist is a carefully constructed memory alteration that he’s had to implant in Batman three times, to prevent him from learning the truth.

Jacob Kane, frantic after Kate was skewered with a sword in front of him then dragged out by ninjas, punches his fists bloody on his cell window until suddenly, Colony Prime, the General, and several Colony operatives arrive in the Belfry to free him and his two men.

Ra’s reveals that the League of Shadows is his guiding hand to shape humanity, while the League of Assassins is his public face with the rich and powerful. He used magic learned from Zatanna to alter Bruce’s memories so that he could use the Shadows to prevent humanity’s destruction by itself. Placing Shiva in charge of the Shadows proved effective until she learned he didn’t intend to destroy the world with them, but save it. She struck out on her own, taking Ra’s most deadly tools with her, planning to live up to her name and wipe life from the face of the Earth. Ra’s, knowing she must be beaten, turns to Batman for help. When Batman releases him from the cage, Ubu lets the Shadows in, and Ra’s uses an ancient poison to paralyze the Detective. Using Zatanna’s spell, he restore’s Bruce’s memory of the Shadows, then hands him over to Shiva, who vanishes in an explosion.

Aboard the Colony’s helicarrier, Jacob plans to make sure the Shadows are destroyed along with Gotham. Knowing he can’t stop them face to face, he only hopes he can catch them in their own destructive machinations.

However, Cassandra Cain, the Orphan, appears in the sewers in the midst of the League of Shadows, wielding two swords and ready to take them all down.

In Depth: Marcio Takara makes a welcome return to Detective to round out this arc of the League of Shadows. Though Christian Duce and especially Fernando Blanco provided excellent art for the last two issues, Takara’s use of thick, paintbrush-style lines, and liberal shadows in an expressionistic way really lend character and definition to our favorite heroes and villains. Though Shiva only appears once or twice in this issue, Takara’s vision is terrifying and stylish, a perfect visual to accompany the sense of dread the story is building around her. Next issue’s all-out battle between Cass and the League promises to be an extremely special one.

James Tynion pulls some tricks on us, revealing that Batman isn’t the World’s Worst Detective, missing both the Court of Owls and the League of Shadows for his entire life. Instead, Bruce learns a shocking secret – he’s discovered the Shadows not once, but four times (including the present), and Ra’s has erased his memory each time. Ra’s own plan is quite mysterious and exciting, though we shall have to wait to see how paralyzing Bruce will lead to Shiva’s defeat. It’s also exciting to see Tynion laying down bricks to build his next storyline, “Intelligence,” which will feature Zatanna. So not only will the Mistress of Magic tie into “The Button” over in Batman and The Flash, but it will also connect to Batman’s distrust of his memory thanks to Ra’s. Lastly, having the Colony break in pay off the elements of the story introduced in Batwoman Begins develops the Colony further into grey, rather than mustache twirling black as some reviewers have claimed.

Pick up/Pass? Some excellent Batman vs. Ra’s, as well as setting up the Cassandra Cain fight we’ve all been waiting for, served up on some absolutely scrumptious Marcio Takara art – definitely pick this one up!

In Conclusion: Though this issue sets up more than it pays off, it’s all done with the writing and artistic polish we’ve become accustomed to here in Detective Comics.