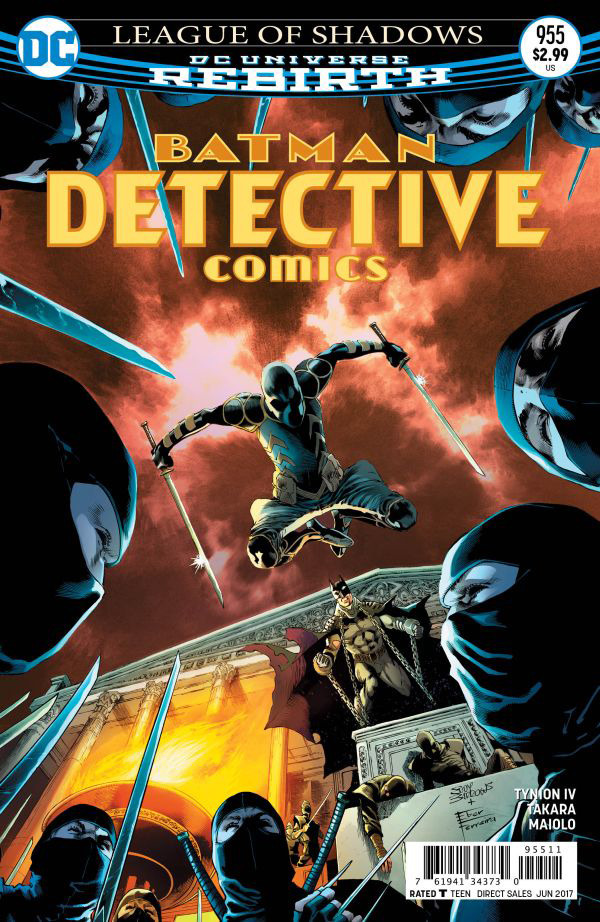 In Brief: All hope seems lost – except for one girl who can beat every ninja ever: Cassandra Cain!

The two time threads interweave, with Christine Montclair, the ballerina from Detective Comics #950, reading Cassandra a story of a girl who thought she was a shadow in the past, and the struggles of Cassandra and the rest of the team in the present.

Kate Kane, Batwoman, wakes up stripped of her uniform and gear, skewered and chained next to a nuclear device which will crack the fault line under Gotham wide open. Luke Fox, Batwing, and Jean Paul Valley, Azrael, are chained next to her, with Clayface imprisoned in multiple jars around them. Though Jean Paul thinks they are in hell, surrounded by demonic ninjas, Luke has faith in Batman. Shiva brings Batman down to the nuclear room to chain up with the others. Before she can finish restraining Batman, her soldiers tell her that Cass has come.

Over a magnificent sequence of Cass taking down nearly every ninja in the League of Shadows alone, we hear Christine reading the story in the past. The story intertwines the themes of Cassandra’s isolation during her childhood training and abuse, and her desire to make the world a better place. When Cass wakes to hear Christine reading, the dancer apologizes for her fear several issues ago. Cass denies she would ever kill, and Christine tells her that her movements, tracked by the website Spoiler Alert, show someone who is good, not evil. Cass is crushed when Christine asks about her mother, and Christine embraces her, insisting that she’s not broken. Through the story, Christine tells Cass that there’s room in the world for someone like her – someone who can’t be “normal,” but also refuses to be the killer her father shaped her to be. We see Cassandra triumphing in the present, and in the past, she tells Christine that her name is Cassandra Cain, rejecting the label of Orphan (for now, at least).

Aboard the Colony helicarrier, Ulysses summons Jacob Kane to let him know that in between trying on his stolen Red Robin costume, he’s created a nano-swarm that acts like targeted napalm, which could destroy the underground League of Shadows without destroying Gotham City itself. Before we find out Jacob’s decision, the scene switches to Shiva approaching her daughter as she finishes defeating the last of the ninjas. Though Shiva claims she’s not impressed by Cassandra’s refusal of the purpose that David Cain instilled in her, Cassandra knows better through her understanding of body language. She tells Shiva she does not stand alone. When Shiva tells her she will always be alone, Cass kicks her in the head, giving Batman and the team time to assemble behind Cass.

In Depth: James Tynion has gone from strength to strength in his Detective Comics run. It’s hard not to sound like a broken record because of the sheer consistency of his writing, and the stellar quality of his artistic collaborators, but Marcio Takara is definitely one of the best Tynion has worked with in his five year writing comics. The combination of brutal action montage and intensely emotional journey for Cassandra is handled perfectly by Takara and Tynion, and the finale next issue promises to be one amazing ride, with the teaser phrase “The Duel” closing out this issue.

This reviewer wonders if Tynion intended to reference the classic Brian Bendis arc of New Avengers, Breakout, with his “team get knocked out, stripped, and tied up together” scene. There’s clear moments which show the attention to details Tynion has, from this kind of comics in-joke, to the return of the ballerina from #950, the echoes of the narration which concludes Cassandra’s original Batgirl run in issue #73, and even a hint of what Spoiler, Stephanie Brown, has been up to (which we’ll see in just two issues) with the website Spoiler Alert tracking Batman’s team’s movements (also a reference to the Bat-tracker website Spoiler monitored way back in Batman Eternal).

A final note: there was some fan outcry at Cassandra apparently killing the ninjas at the end of last issue. This reviewer would like to go on record by saying that they never in a million years doubted that Cass would remain true to the heroic path, but just in case, Tynion has confirmed that every single ninja is 100% alive on Twitter.

Pick up/Pass? Tynion and Takara creating a Cassandra Cain issue. After Batman and Robin Eternal #13 and Detective Comics #950, do we even need to say it? Pick up!

In Conclusion: With stellar art, and writing honoring the old and the new, Tynion sets up the finale of the League of Shadows with ultimate flair.