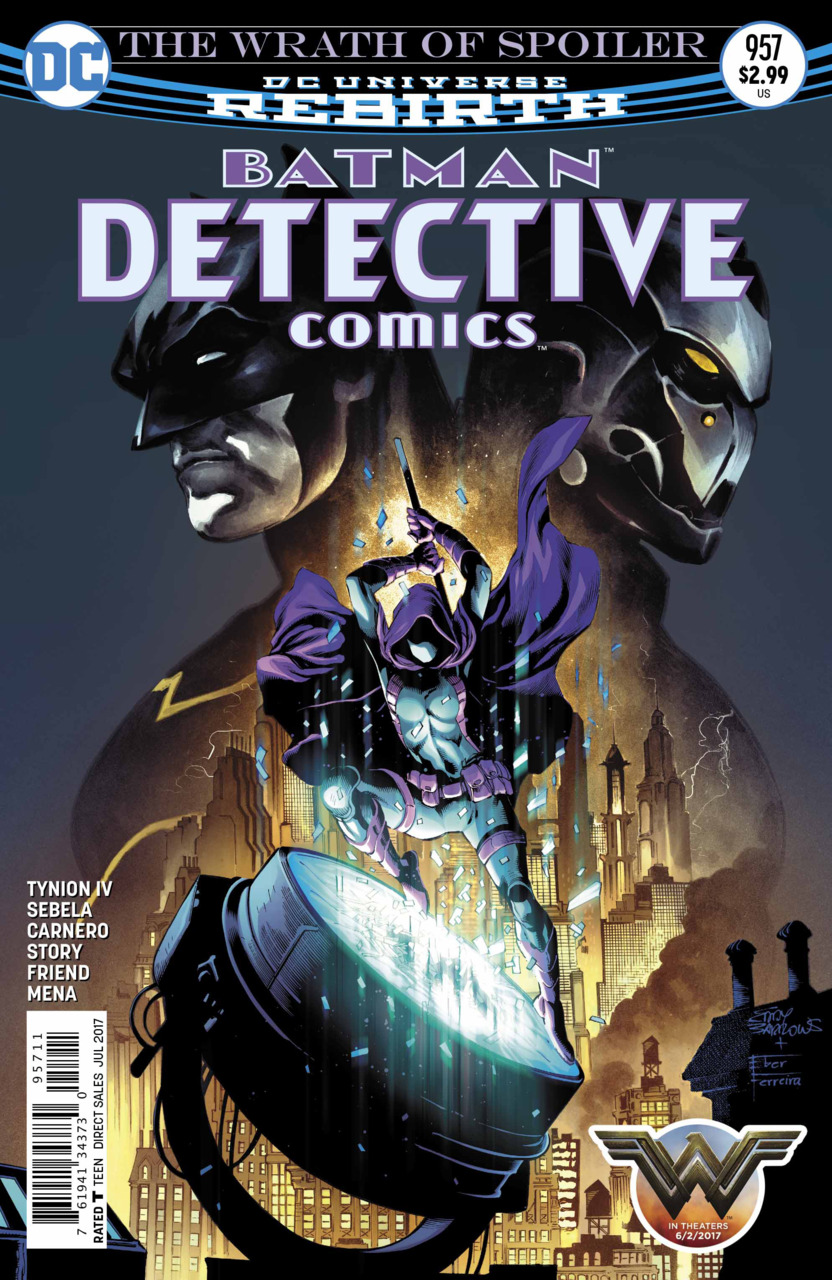 In Brief: Spoiler (Stephanie Brown) faces a new challenge in her crusade to end all costumed combatants in Gotham – the vicious armored villain Wrath.

Summary (Spoilers): As Harvey Bullock stands guard over the Bat Signal, which has been sabotaged five times in the past three weeks, Stephanie Brown as the Spoiler distracts him with cockroaches as she rigs the light to blow for the sixth time. As she does so, she narrates in her head why she’s chosen to set herself against Batman and the other superheros in Gotham – because of all the collateral damage.

As she swings away from the GCPD, the armored villain Wrath and his minions, the Scorns, attack Gotham News Network in the hopes of attracting Batman’s attention, and getting Wrath to the top of the heap when he defeats Gotham’s Dark Knight. However, his plan to issue an ultimatum via live television is blocked by Spoiler taking down the transmitter. As she takes down the Scorns, Steph continues to articulate her reasons for her current course – and we see that Tim’s death continues to provide profound motivation and a warping of her perspective. Successful in neutralizing the henchmen, Steph takes one of their helmets and jacks into Wrath’s network.

The villain hears Batman’s voice, and follows it into Steph’s trap. The voice he’s heard is her recordings of Batman training her, and she uses her control of Wrath’s network to first zap him, then knock him down with a heavy metal slab. The police, led by Bullock, burst in, trying to take Steph into custody. However, she tells them she wants them to take the credit, then uses a smoke bomb to disappear. She meditates on her next move, only to be surprised by Anarky, who has been watching her, and wants to help.

In Depth: Taking a break from main writing duties this week, James Tynion IV co-plotted this issue, with scripting duties handled by indie writer Christopher Sebela. Originally, novelist, Catwoman and Batman and Robin Eternal writer Genevieve Valentine was supposed to co-write the issue with Tynion, but per Tynion’s twitter, scheduling issues prevented that collaboration, though Valentine still gets a “special thanks” in the credits this week. One wonders if the switch is connected to the last minute changes to the last issue necessitated by The Button, as reported in the press. Tynion also has a lot on his plate, with the two Metal prologue issues coming in June and July, continuing to co-write Batwoman, and his creator-owned series. Whatever the reason, Sebela does a very strong job with the writing. His voice for Steph fits very well with what Tynion’s being doing with her in Detective – determined, sad, intelligent, a bit naive, with just a hint of the perky humor that Steph normally has when she’s not plunged into despair because of the death of Tim. Steph’s narration throughout the issue was a nice return to the kind of interior monologue that she’s had throughout her history, from Chuck Dixon in Robin, to Devin Grayson in War Games, Bryan Q. Miller in Batgirl, all the way to Tim Seeley in Batman Eternal. Steph is a very vocal and articulate processor of her own thoughts – though not always the most self aware.

Sebela provides some really nice parallels in his use of Spoiler’s opening line, “Let me explain how it works in Gotham City.” Not only do Steph and Wrath share a sense of trying to see the way society works, but also an end goal of a world where Batman isn’t needed, and the citizens of Gotham are free to make their own choices.

To give a bit of history, the Wrath is a character deliberately designed to parallel Batman, with a backstory of a criminal father murdered by police swearing vengeance on the system, using inherited wealth and technology to take his revenge. He only appeared a few times, most recently as a new version in the new 52 continuity, where he was powerful, but not terribly memorable in John Layman’s run on the Detective Comics title. There, he was a fairly generic mustache twirling, monologuing villain on a roaring rampage of revenge. Here, he’s more of an unhinged glory hound, serving primarily to highlight the dangerous line Steph is walking.

The appearance of Anarky at the very end raises a lot of questions. Steph has already worked with the original Anarky, Lonnie Machin, in the Detective Comics: Endgame one-shot. However, in the new 52 continuity most closely connected to the Rebirth world, Anarky was politician Sam Young, who used Mad Hatter’s mind control technology to fake a mass uprising through V for Vendetta style masks and a similar chaotic philosophy. Though Tynion’s love for the 90s characters like Lonnie make it more likely that he’s under the Anarky mask, we can’t discount the possibility that Young has broken free after his capture during Francis Manapul and Brian Buccelletto’s run on Detective Comics. Solicitations for August promise that Steph will return alongside Anarky, in much more dire straights, in a multi-issue arc again drawn by guest artist Carmen Carnero.

Speaking of Carnero – she provides incredible artwork for this one-shot. Her drawings of Spoiler are wonderful – clean lines and dramatic shadows, excellently highlighted by Javier Mena’s muted but detailed colors. Carnero previously pencilled part of issue #945 of this series, focusing on the Steph scenes in that issue as well, which prepared her well for this story. There are a couple of times when  it’s not totally clear how we got from point A to point B, such as in Steph’s fight with the Scorns – she seems to have missed one of them during the actual fight, but they appear unconscious on the ground in another panel. Despite these minor issues, the art team on this work keeps to the incredibly high standard of the Detective brand during this run.

Despite the fact that Batman never appears, this feels like a really solid issue of the Detective Comics of old – a one-off story, with a strong narrative point of view, a problem to be solved, and a solution presented all in 20 pages. Though occasionally the dialogue feels a bit like it’s forced to fit the theme, on the whole, Sebela fills in ably for Tynion.  Ten issues after we last saw Steph, we check in on her activities, and though she hasn’t yet realized that in trying to oppose Batman, she’s basically become her own version of Batman, there’s every hope that she will soon realize the truth. Despite being opposed to Batman, her voice and motivations also keep her very engaging and sympathetic, so that we root for her to rejoin the team soon.

As a final note, the original lead artist for Detective, Eddy Barrows, has been off the book for quite a while, now, with Christian Duce, Fernando Blanco, and Carmen Carnero taking the last months, and original secondary artist Alvaro Martinez doing the whole Intelligence arc focusing on Azrael and Zatanna in the next two months. However, it’s been nice having Barrows provide the regular covers for the League of Shadows arc, and this one-shot as well, providing a sense that he’s still part of the visual world of Detective.

In Conclusion: With an examination of her beliefs the center of this story, Spoiler shines as she’s caught between her convictions and Batman’s methods.