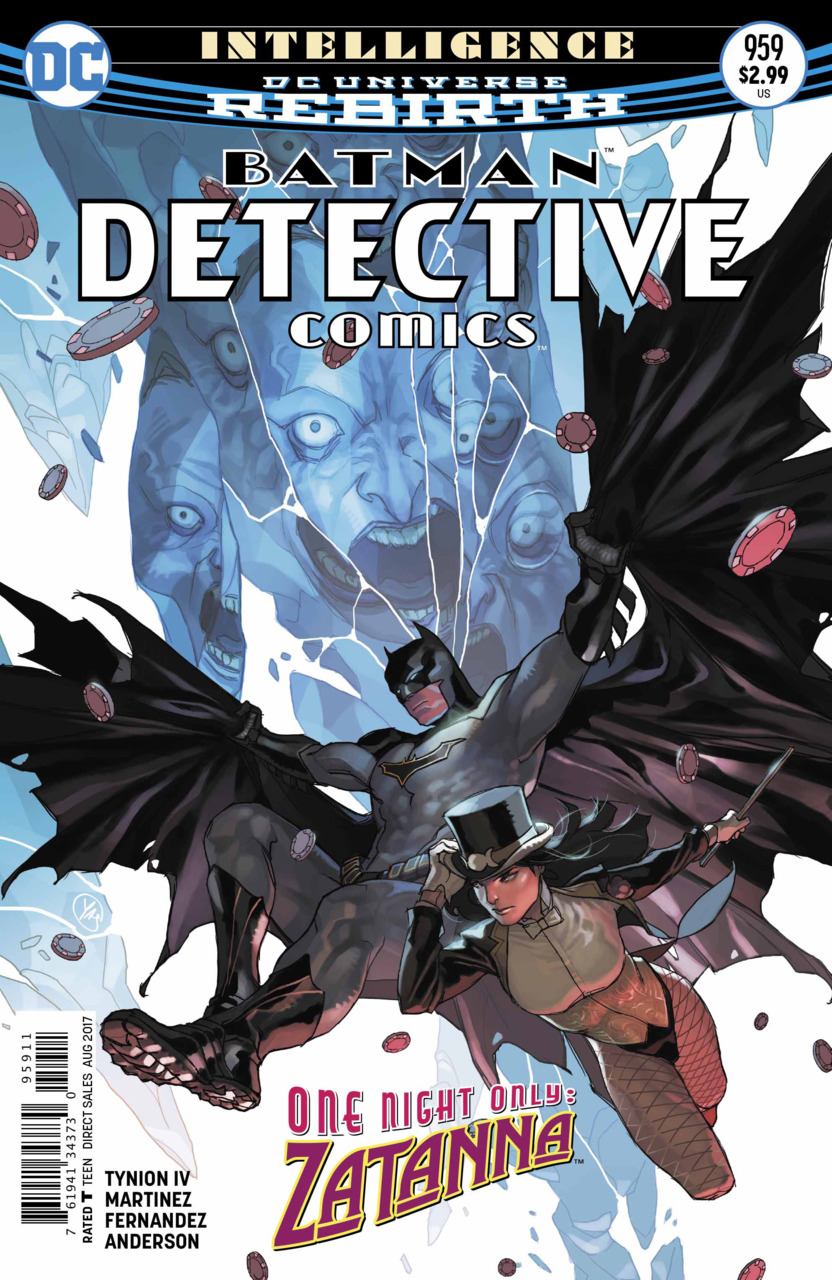 In Brief: As Batman and Zatanna reconnect, Azrael faces Ascalon and comes away shaken.

Summary (Spoilers): Years ago, Zatanna finds Bruce atop a casino roof in Vegas, trying to master her father’s coin trick. Bruce struggles with his mission, and his attempts to gain the skills he will need. Telling Zatanna of his love for Gotham, their situations have clearly drawn them together, though distance still remains.

In the present, Zatanna uses her magic to suit Batman up in Penguin’s Iceberg Lounge, as Ascalon recovers from her gravity spell. Though she attacks with a hydroelectric trick, Ascalon uses foam to keep her from speaking, neutralizing her at least for a moment. The robot then attacks Brother Kodo, but Batman interposes himself as the team arrives. Ascalon is puzzled by Azrael, who says that the battle is his responsibility, but when Ascalon touches Azrael, he attempts to overwhelm the Suit of Sorrow’s programming with his own. Batman and the team coordinate to evacuate the Lounge, but Brother Kodo has been killed with cyanide, as Cass notices. Sensing Kodo’s death, Ascalon leaves to seek the truth of what puzzled it.

At the Belfry, Dr. Victoria October (from Batwoman Begins) treats Nomoz, who reveals that he’s a wholly engineered sentient being by the Order. Clayface tells Nomoz that Kodo died, and Nomoz says that he was the last bit of decency left in the society. As October prepares to operate on Nomoz, she indicates that she could take a look at Clayface’s condition as well.

Meanwhile, Batwing (Luke Fox) flies Batwoman (Kate Kane) to Burnside, where his company, Foxtech, has its main campus. Luke fills her in on his life, including his sister Tam running the business, before showing her his collection of AI he’s built up since he looked at the Suit of Sorrows in issue #950. Jim Gordon’s former Batsuit, codenamed Rookie, serves as Luke’s primary assistant, and he tells Kate about the ancient programming of the Suit of Sorrows. Comparing it to his scan of Ascalon’s programming, he realizes that Ascalon isn’t a singular being, but a congregation of intelligences all working together to solve the problems of St. Dumas.

Elsewhere in Gotham, Batman and Zatanna speak of the reason he originally approached her – seeking answers to the unanswerable. Zatanna expresses her unwillingness based on the cost, but Batman shows her a hologram of Tim to demonstrate the extent of his loss already, and his desire to pursue the truth whatever the consequences.

Lastly, Jean-Paul, Azrael, meditates, and sees a vision of a monstrous version of Azrael telling him he must remember his true nature.

In Depth: Though a bit less well constructed to build to a bang than the opening issue, this issue develops the conflicts and relationships of the current arc very well. Tynion continues to demonstrate his gift for appealing relationships, most strongly in his depiction of Bruce and Zatanna’s relationship in the past and present, but the exchanges between Clayface, Nomoz, and Dr. October, and Luke and Kate show that all of the team has their own preoccupations and lives outside of the adventures of the book. The kind of richness really develops the world of Batman beyond just the one man and his mission. Tynion also ties so many past threads into his tale, even fixing some poorly constructed past narratives by having Tam Fox not be in a coma but instead running bleeding edge tech companies (similar to her role in the pre new 52 Red Robin title). Little details like Rookie from Scott Snyder’s Superheavy being Luke’s assistant and Dr. October returning to potentially play a part in Clayface’s storyline are combined elegantly in this issue.

Though Tynion’s writing remains top notch, the real standout of the issue is Alvaro Martinez. Long one of Tynion’s best collaborators (since Batman Eternal), Martinez’s use of long panels, and particularly the penultimate page, with a miniature nine panel grid showing the feelings and progress of Jean-Paul’s meditation, show the care that he and Tynion put into crafting this book. It’s an excellent thing that Tynion choose to give the art teams more of a chance to shine by using the League of Shadows arc to allow them to finish their own arcs, rather than trading off roughly every two issues.

In Conclusion: We dig into the story of Jean Paul, Bruce, Zatanna, and the rest of our heroes in this second issue.