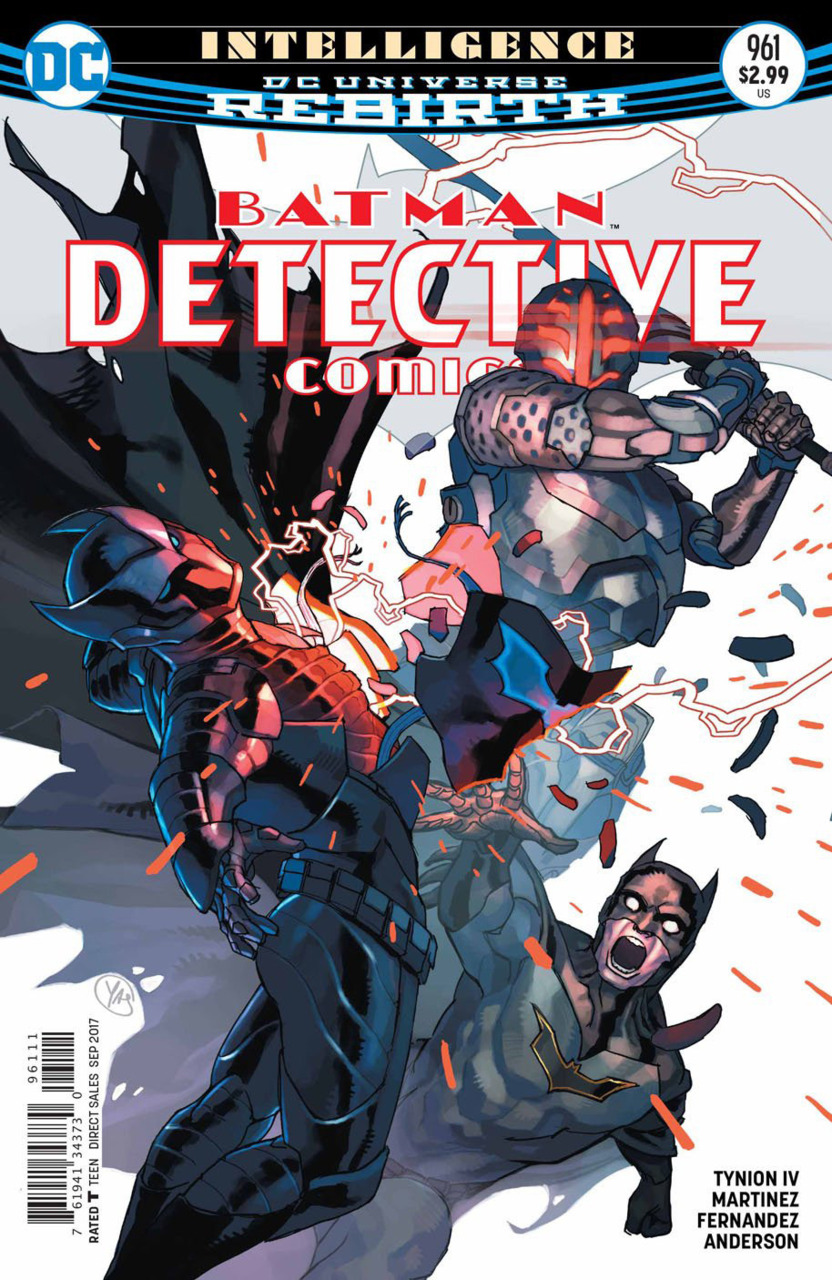 In Brief: Azrael faces his very real inner demons, while his body fights the rest of the team, and Batman pursues danger against Zatanna’s advice.

Summary (Spoilers): Zatanna opens our issue in flashback, showing a young Bruce a card trick, revealing the truth of her magic to Bruce, and trying to impress him by telling him of the God Machine. However, they are surprised by her father, Zatara, who sees what his daughter has done, and quickly takes steps to erase the dangerous knowledge of the Sphere from Bruce’s mind, despite his trust in the young man’s goodness. As the two teens retreat, they bump into Ra’s Al Ghul, who is meeting with Zatara.

In the present, Zatanna regrets the foolishness of her youth that led her to show him the sphere, and his first memory erasure that was undone by Ra’s in the League of Shadows arc. She continues to resist Batman’s request to use the Sphere, but a Bat-alarm interrupts their debate, and the two old friends rush to the aid of Batman’s team.

Jean-Paul Valley, Azrael, wakes up in a strange world of blue sky and endless water. A strange boy talks to him, the manifestation of the System the Order of St. Dumas hammered into his brain as a child, and calls itself Ascalon. Jean-Paul rejects the System, which the robotic Ascalon reset in their last encounter (similar to the way Jean-Paul himself reset Bane and Red Robin’s minds during Batman and Robin Eternal). Jean-Paul rejects the dangerous rigidity of Ascalon’s division of the world, and the theological debate affects the psychic world around the two, causing a terrifying storm as Ascalon vows to kill the team using Azrael’s body.

Outside, Azrael’s body attempts to follow Ascalon’s orders, as Luke and Kate attempt to break through the brainwashing of years and the attack of the hostile artificial intelligence. Cassandra arrives, giving Kate a chance to hold Azrael off.

Ascalon sees the evil in Gotham, and plans to eliminate it all – by killing everyone in the city using Luke’s collection of Batwing robotic armors. Luke coordinates the attack, directing Kate and Cass to attempt to destroy the headpiece of the Suit of Sorrows which interfaces Jean-Paul with Ascalon. Luke runs to his workshop, encountering Rookie, who has not been taken over by the evil AI like all of Luke’s other artificial intelligences. This prompts an idea from Luke, as Cass and Kate finally manage to stun Azrael long enough for Batman and Zatanna to arrive and put Jean-Paul in a magical sleep. Zatanna gives Kate some healing to help her recover from the vicious injuries she sustained in fighting Azrael, and Luke reveals his suit of armor interfacing with an artificial intelligence based upon the moral center of Batman – the AzBats suit! Luke proposes they give Jean-Paul the suit so that he can defeat Ascalon once and for all.

In Depth: Though James Tynion’s writing has been strong throughout this run of Detective Comics, Alvaro Martinez’s art remains a revelation in this arc. His work with Tynion in the two Eternal series had already marked him as a master of the appealing, clean lined style – less sketchy than Jim Lee or Tony Daniel’s “house style”, less photoreal than fellow new 52 superstar artist Jason Fabok, but not less confident. The amazing ballet two-page splash in Batman and Robin Eternal #7 had already proved Martinez has a gift for incredibly thoughtful and gorgeous panel design, but the entirety of the “Intelligence” arc has pushed that design sensibility further even than that piece. The opening page, with a huge number of panels showing neatly the passage of time in tiny changes between panels, builds off of the meditation scene with Jean-Paul and candles two issues ago, but in an even more confident storytelling device to demonstrate Zatanna’s point in her conversation with Bruce. Raul Fernandez should be complimented on bringing the best from Martinez’s pencils, which benefit from a thicker line. Brad Anderson’s veteran color instincts differentiate between the past and present with warmer and colder color tones, and brings detail and life to the panels while enhancing the optimistic but still able to delve into the darker corners of the mind style. A minor negative, the lettering in this arc has been occasionally sloppy, with typos and the bizarrely unreadable credits lettering marring Sal Cipriano generally unobtrusive and clear work.

In addition to the brilliant layouts throughout the book, the fight choreography is stunning – Kate and Cass’s desperate attempts to slow down the wrath of a terrifyingly skilled and strong Azrael is like one of the best martial arts cartoons made. The layout of the area being fought in never confuses the reader, and the actions are efficiently displayed, lingering on details like the way Cass balletically recovers from one of Azrael’s blows, while impressionistically powering through the brutality of the beating Kate and Cass are forced to deliver to disable Azrael’s helmet.

All this praise of the art team does not in any way take away from the work of James Tynion. One detail that stood out from the debate between Bruce and Zatanna about knowing the future seemed to be a reference to Dr. Manhattan and the ongoing Rebirth plotline.  I don’t go looking for connections to Watchmen in this Rebirth era, since I assume that all will appear in time as the story unfolds, but the way Tynion words Zatanna’s argument – the paralysis that omniscience brings to a finite person’s mind – feels very much like a connection to the famous scene of Dr. Manhattan meditating on his past and future on Mars – and possibly also J. M. Straczynski and Adam Hughes’s extrapolation of that conceptual framework in Before Watchmen: Dr. Manhattan. In addition to this impressive blending of philosophical insight and comics continuity, Tynion shines in tiny references, from Kate’s loathing of vampires from the end of her solo series in the new 52, to Jean-Paul owning a cat being one of Luke’s attempts to break through his conditioning, and Cass quoting a perfect line of Shakespeare to try to accomplish the same thing. Though Tynion’s pattern of bringing in the theoretical center of his arc very late in the game – first with Tim in Rise of the Batmen, then with Stephanie in The Victim Syndicate, and most recently with Cassandra in League of Shadows – continues with Jean-Paul, the focus comes again with a vengeance with the psychic battle within Jean-Paul’s mind. Treading a careful line between showing the destructiveness of a cult and denigrating all faith, Tynion weaves a deeply dramatic tale around the tragic figure of a man trying to break free from childhood brainwashing.

Pick up/Pass? Despite a bit of wonkiness in connecting the A and B plots of this arc, the character interactions, action, and stellar artwork make this a continued Pick Up recommendation!

In Conclusion: A combination of beautifully rendered character moments and action, “Intelligence” closes out its penultimate issue with completely justified confidence.