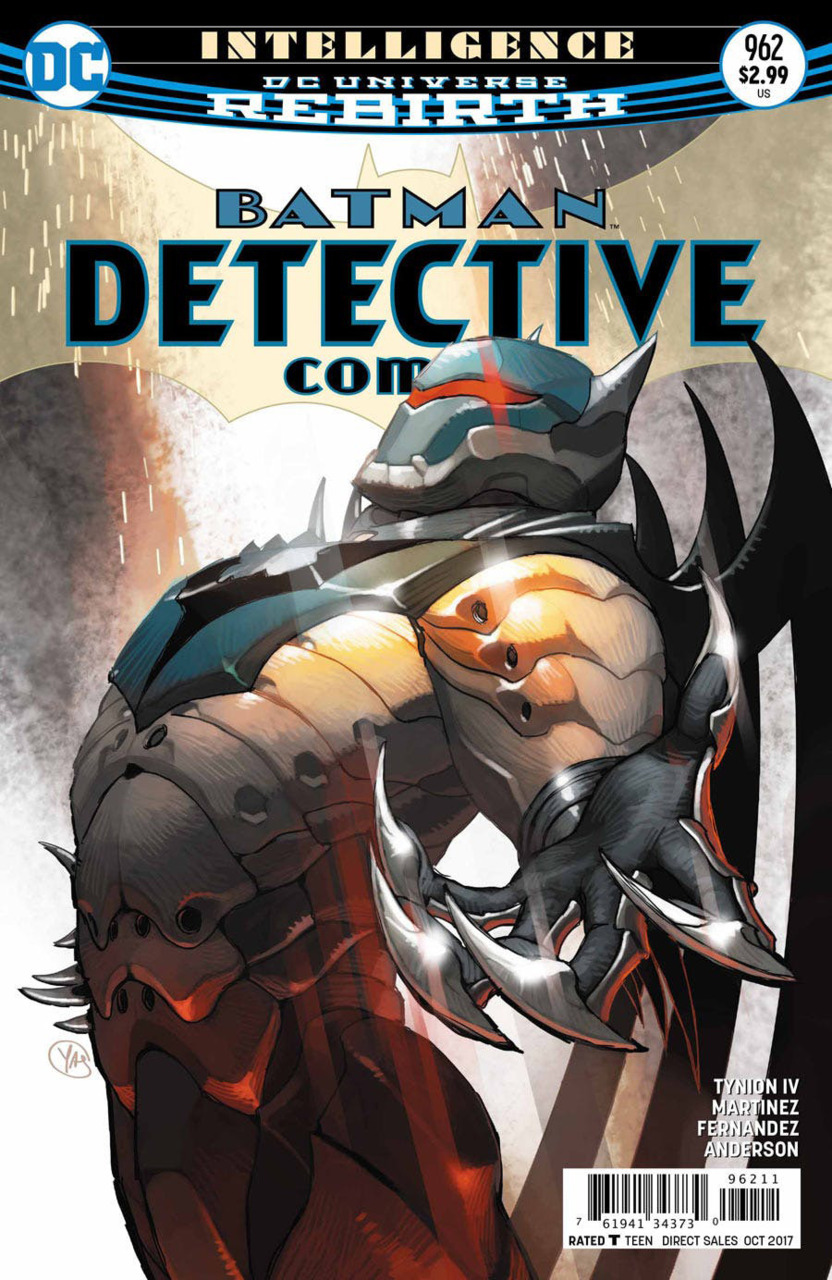 Overview: In the finale of “Intelligence,” all must come together to fight Jean-Paul Valley’s nemesis Ascalon, but surprises await…

Synopsis (Spoilers ahead): In the violent storm crashing through Jean-Paul Valley’s mind, the child Ascalon continues to try to murder Jean-Paul’s friends, but a gigantic figure of a Batman looms over the tempest, challenging the artificial intelligence to a fight. The Bat calls Jean-Paul to wake up, and we see through his visor Luke Fox, explaining that the Bat figure is another artificial intelligence, designed to give Jean-Paul’s mind assistance in resisting the System of Ascalon. Luke and Batman ask if Azrael is okay, and Jean-Paul responds that he’s ready to fight.

In the Belfry, Ascalon’s primary robot body faces Clayface, defending Nomoz. Though Basil gives it all he’s got, Ascalon disables him. Before he can destroy the building, Zatanna and Batman arrive, and the magician makes short work of Ascalon’s commandeered Batwing robots.

Inside, Batwoman and Cassandra assist Nomoz to safety, but he insists on seeing Jean-Paul. Azrael himself, however, arrives on the scene and challenges Ascalon directly. Nomoz escapes from Batwoman and Cass and rushes to where Azrael and Ascalon fight in brutal combat, but just as he tells Jean-Paul that he and Ascalon are brothers, the artificial intelligence cuts his throat with his sword. Holding his dying mentor, Jean-Paul learns that his father, Jean-Paul Valley Senior, is the one who activated Ascalon. In a rage, Azrael punches through Ascalon’s chest, allowing Luke to attempt to inject the Batman artificial intelligence, but Ascalon threatens to turn every device in Gotham to his will, destroying all the sinners there. Zatanna reveals her final card – the Gnosis Sphere. She believes that if Ascalon learns the truth of reality, he will also see the reason why Batman has chosen to fight for redemption, rather than destruction. The overload of knowledge causes Ascalon to see the truth, apologize to Jean-Paul, and retreat to discover more about himself. Before he leaves, however, he tells Batman that Tim Drake is alive.

Two days later, Batman pushes a brutally beaten but recovering Jean-Paul in a wheelchair into a cemetery to visit Nomoz’s grave. Jean-Paul has asked Luke to reconfigure a version of his Azrael suit, rather than stay in the Azbats version. The two discuss the Batman artificial intelligence, the weight and fury of it, before Batman ponders what it means that Tim has been hidden from him for so long.

In the Swiss Alps, Ra’s al Ghul invites Valley Senior to join his organization and meet their benefactor, to see the big picture.

Analysis: One of the important things we’ve learned as James Tynion’s run on Detective Comics has continued its strong sales and creative direction is that Tynion’s intention to write the title all the way from 934 to 1000 means that his long-term plot must advance extremely slowly. Major reveals like Tim Drake’s survival are spread very carefully, and Tynion gives each arc a balance of an immediate threat and a connection to his long term narrative. This issue’s threat, the rampaging artificial intelligence Ascalon, is defeated through the Gnosis Sphere in what might be a deus ex machina, though its function and the trajectory it takes from Batman’s first meeting with Zatanna are a strong thread through all five issues of this arc, so it does not come from nowhere to solve all problems. Additionally, though Ascalon abandons his plans to murder all of Gotham’s citizens, Tynion will almost certainly bring him back, considering that this arc’s contribution to the ongoing mystery shows Valley Senior, now in command of the completely evil remnants of the Order of St. Dumas, joining with Ra’s al Ghul in the long-term plan we glimpsed last arc. Like Lady Shiva, the immediate threat is neutralized, but Tynion hasn’t wasted any characters so far, so I look forward to seeing both Shiva and Ascalon in future arcs.

A few elements of the resolution to Jean Paul’s story ring a bit too conveniently – Nomoz’s need to tell Jean-Paul that his father lives and orchestrates Ascalon against him comes at a point that seems calculated just to let Ascalon kill him. Instead of waiting until Zatanna reveals the sphere, which she could do at any point, Nomoz wanders through the Belfry until he runs into the robot’s sword, then gasps out the crucial information about Jean-Paul’s enemy. Similar to the way Cassandra learns a secret from her mother in the last arc, the scene clearly exists to setup the ongoing plot, but doesn’t feel as organic and intelligently motivated as the actions in previous chapters of this arc.

Alvaro Martinez emerges from “Intelligence” as the star of the arc. Though Tynion has done some of the strongest writing of this run for the arc, Martinez’s panel layouts, such as the sequence where Jean-Paul awakens and sees his friends through the red visor of the Azbats suit, transitioning to seeing that visor from the outside, give his growing determination to fight Ascalon incredible power. The battle, while a bit confusingly constructed because of the aforementioned arbitrary nature of its conclusion through the Gnosis Sphere, has a very appropriate brutality, with Jean-Paul pulling the Bell down onto his robotic brother, and punching through the machine’s chest. Brad Anderson’s colors and Raul Fernandez’s inks again support Martinez’s clean lined, detailed and expressive pencils beautifully. The sequence where the Sphere overwhelms and “converts” Ascalon shines, metaphorically and literally, as Anderson simulates astonishing brightness, and the expressions and body language of Batman and Jean-Paul as Bruce realizes that Tim lives, that the boy he feels he failed did not die all those months ago show. Martinez has the full skillset for a great comic – a powerful ability to draw action and the talent to draw tiny inserts and facial movements that move our connections to the characters.

Those connections also highlight Tynion’s greatest strength as a writer – his ability to give each character moments to shine, from Clayface’s heroic delaying action, to Kate and Cass’s admiration of Zatanna, to the motivations and actions of the main three characters of the arc, Jean-Paul, Bruce, and Zatanna. Azrael in particular, since he’s the focus of the arc, gets the spotlight here, as Tynion uses Luke’s Batman artificial intelligence and the Azbat’s suit to recreate elements of Jean-Paul’s time as Batman in the famous Knightfall storyline. The internal struggle that led to the death of Abattoir and proved his inability to fill Bruce’s cape appear in many forms throughout this issue: in the storm engulfing Jean-Paul and Ascalon within his mind, and the scene reference above where we see the world through the red visor of Azbats, not to mention the way Jean-Paul describes the artificial intelligence of Batman inside his mind, always driving him to try to save everyone. Though obviously one issue of Azbats cannot recreate dozens of stories and full years of the Knightfall crossover, Tynion clearly loves that story and this character, bringing it all together in a satisfying remix for the Rebirth era, with just a hint of Grant Morrison’s All-Star Superman paralleling the way having great knowledge of the world converts both Lex Luthor and Ascalon in the end.

Lastly, a few comments on some external events. The revelation of Tim’s survival probably serves the story better here than distracting from the end of the League of Shadows where it would have originally appeared, showing the flexibility of Tynion and his editorial support. Though obviously as a huge Stephanie Brown fan, I look forward to the next two issues starring her and Anarky, the whole title rushes forward to finally catch up with Tim Drake in September’s A Lonely Place of Living.

Final Thoughts: Azrael’s fight against his demons, inside and out, leads to stunning revelations which continue to lay the groundwork for the team’s future adventures.