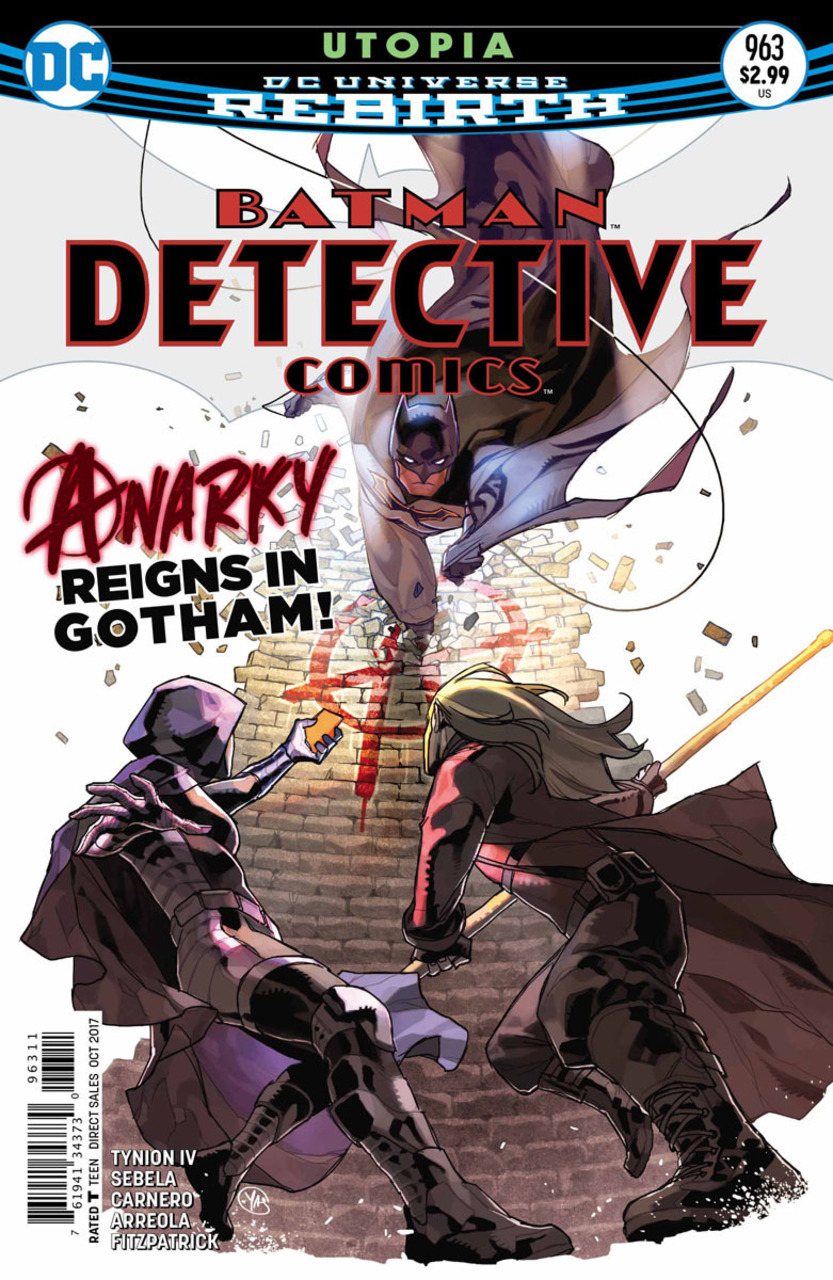 Overview: Spoiler (Stephanie Brown) struggles with her mission as her partner, Anarky, reveals his larger plan to her.

Synopsis (spoilers ahead): Several months ago, before Tim Drake (Red Robin) “died”, Steph sat on a Gotham rooftop with him, eating burgers and talking about the future. Steph wonders cheerfully, but with a hint of worry, where she fits into Tim’s grand plans of saving the world. Tim kisses her, and promises that together, they are unstoppable.

In the present, Steph sneaks into the Argus-quarantined “Monstertown,” the part of Gotham still devastated by Hugo Strange’s attack during the Night of the Monster Men. She sacrifices one of her drones to incapacitate the Argus guards and sneak past them, meeting with Anarky in an abandoned house. The two discuss their plans, with Steph struggling with Lonnie’s lack of trust in not removing his mask or letting her in on his larger schemes, when suddenly Argus bursts in on them.

Nearby, Clayface collects some of the Monster zombie creatures in the sewers, and brings them to Dr. October and Batman. He begs Batman and the doctor to give him the bracelet, as he feels the moral center of his brain degrading as he stays too long in Clayface form. They encourage him to continue to fight the darkness to be a better man, but he remains doubtful.

Steph holds her own against the Argus troops, but Anarky surprises her by taking out the bulk of them with prearranged traps in the house. He takes her to one of the secret tunnels Tim took the team through in Rise of the Batmen, showing Steph that he’s creating a secret community with immunity to the Monstertown sickness, instead of hiding from it like Argus wants. However, Batman follows them into the tunnels unnoticed.

Analysis: After the triumphant finale of Intelligence, we return to the estranged Spoiler and her struggles to find a better way than Batman’s. Christopher Sebela, working with Tynion, produced the last glimpse at Steph’s journey, and he returns to develop the next step. “The Wrath of Spoiler” garnered quite a bit of criticism for Steph’s anger and criticism of Batman’s methods while she used the same methods, and Sebela and Tynion deal with the criticism head on by having Steph acknowledge that so far, she’s continually fallen back on both the methods and the goals Batman taught her. Sebela has a more youth-inflected touch in writing than Tynion tends to, showing Steph filming herself with her phone as she flirts with Tim in the lovely and elegiac opening. He also manages to show Anarky’s philosophy much better than the last time the character appeared in Detective Comics (during the new 52 under Francis Manapul and Brian Buccelleto’s hands) – fairly standard fight-the-power talking points (or punching points, as he mostly delivers his rants while he beats down his opponents), but rejecting chaos and destruction for its own sake.

We know from recent solicitations that Clayface’s story will come to a head once Tim Drake’s return in A Lonely Place of Living wraps up. The back and forth between Clayface, Dr. October, and Batman reminds us of the conflict within him, and shows Basil’s mounting desperation at the lack of solutions.

While Tynion and Sebela’s writing provides a rock-solid foundation for the story, the artistic team builds a brilliant edifice above that foundation. Ulises Arreola and Kelly Fitzpatrick provide very striking colors, especially the opening flashback with its intensely ochre-hued sunset on the rooftops.  Carmen Carnero’s pencils are again consistently clean and appealing. While not as dramatic as the other two main art teams on this book, I hope she remains as one of the rotating contributors to Tynion’s vision. She shines when depicting the central figure of the story, Spoiler, both in the joy-infused flashback where Steph’s sassy and sweet expressions dominate, and with her darker, fully masked vigilante self in the present, where body language conveys her moods. Though her Clayface isn’t quite as dramatic or memorable as Alvaro Martinez’s, he manifests a wide range of complicated emotions in his conversations with Batman and Dr. October.

The recently revealed cover for the final issues of A Lonely Place of Living shows Steph flanking Batman as Tim returns, and this issue sets up her possible coming to terms with the team, as she recognizes the worth of Batman’s methods. However, one troubling possibility remains: that of a love triangle between Steph, Lonnie, and the returning Tim. In a recent interview with The Batman Universe, Tynion referred to Lonnie as the “bad college boyfriend” after Tim’s “good high school boyfriend.” Though he could merely be highlighting the similarities of Tim and Lonnie’s vision for widespread change, while Steph focuses on individual connections and actions to save one person at a time (very much like Batman), but there’s a sense of uncomfortable romantic tension in the last few pages, when Steph finally convinces Lonnie to remove his mask. Whatever the case, next issue will bring this two-part arc to a close.

Final Thoughts: Anarky takes Spoiler deeper into his planned Utopia, as Batman’s team takes a different approach to the problems of Monstertown.