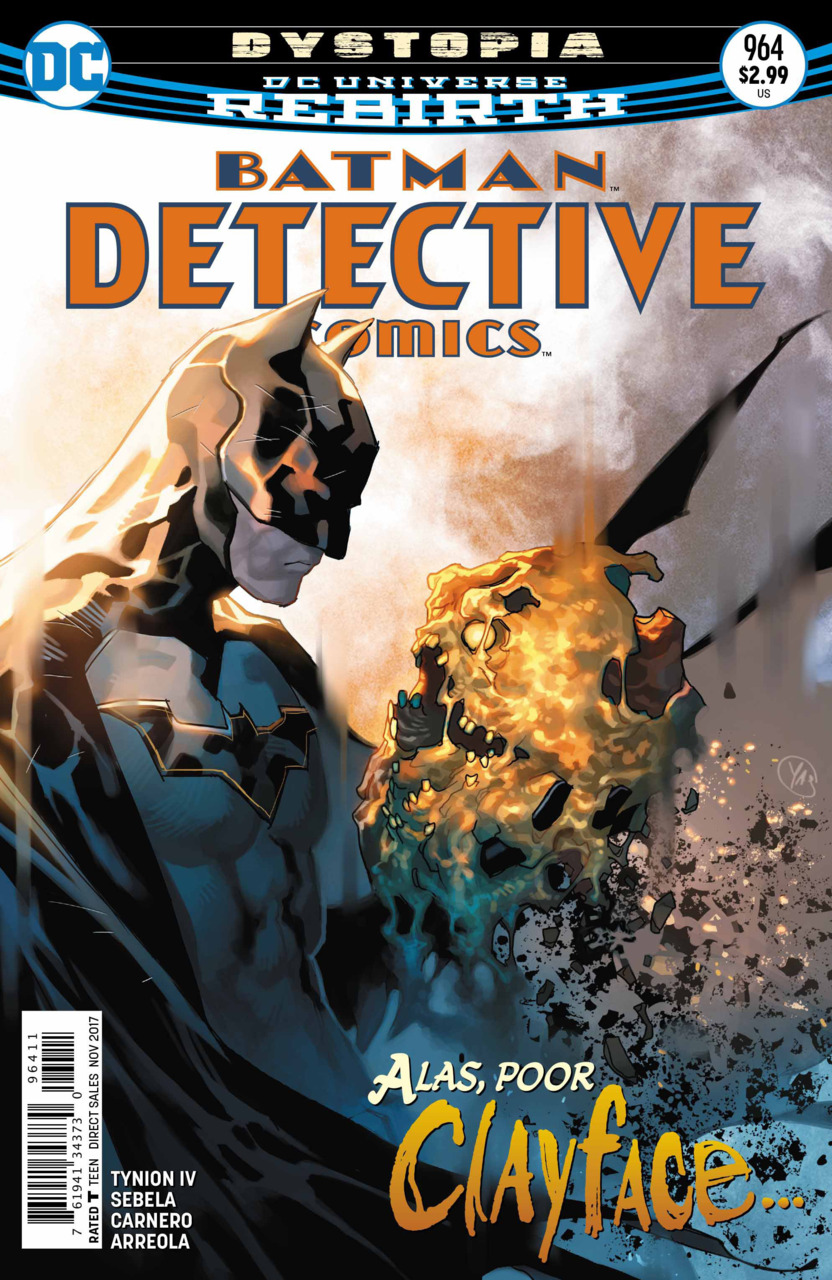 Overview: As Basil Karlo struggles with his inner Clayface, Stephanie Brown faces dangerous revelations from both Anarky and Batman.

Synopsis (spoilers ahead): Yesterday, at Arkham Asylum, the groundskeeper flinches at the sound of laughter from the inmates, but the perspective pushes in to reveal Clayface (Basil Karlo) and Mudface (Glory, the co-worker he turned into a supervillain), catching up and reminiscing. When Basil broaches the subject of the cure Dr. October is working on, Mudface tells him that though she appreciates his visits, he’ll always be the monster who viciously hurt her.

Today, Clayface sits in Monstertown, desperately trying to hold onto his moral reasoning after twelve hours in clay form, listening to a recording of Cass telling him to be brave, that she believes in him, and wants him to make the world better. He loses control and attacks Dr. October.

Nearby, underneath Monstertown, Anarky (Lonnie Machin) shows Spoiler (Stephanie Brown) his secret town of Utopia. While he explains the structure of the town (sounding very like the peasants in Monty Python), Steph meets two good friends – Leslie Thompkins and Harper Row. Harper tries to catch up, but Steph is overwhelmed, and Lonnie pulls her away. He tries to sell her hard on the project, and also kisses her. She pulls away, uncertain, and Batman bursts on the scene, demanding that Lonnie tell the truth about the project.

Meanwhile, Clayface poses a terrifying threat to Dr. October, claiming that Basil Karlo was never there. Cassandra comes to the doctor’s rescue, putting Red Robin’s bracelet on Clayface with impressive skill. Shattered, Basil stumbles off, thinking that the only way to remove Clayface’s threat is removing himself.

Underground, Anarky fights with Batman, and reveals that the First Victim was his first partner. When Steph expresses horror at the Victim’s violent tactics, Lonnie claims that such action is necessary to take down Batman and force him to join with Anarky. Steph, however, rejects Lonnie’s plan and his attitude towards her. Batman assists her in knocking Anarky out, but she leaves angrily. Batman follows, towing the bound Lonnie, promising that though Anarky must face justice in Arkham, he won’t shut down the hidden town. Bruce tries to tell Steph that Tim is still alive, but she leaves too quickly.

In the Belfry, Basil despairs, but Cass approaches. Despite Basil’s protestation, she sees the similarity in their situations, and embraces him to give him hope and comfort.

While in Arkham, Anarky sends a message to the First Victim, saying he failed to recruit Steph, but he did clone her phone, and the next stage of their plan can begin.

Analysis: After a solid first issue, this issue attempts to service the ongoing arcs of both Stephanie Brown and Basil Karlo, which have been largely on hold during the past two arcs. We did get “The Wrath of Spoiler” showing Steph’s methods on her own between Cass and Jean-Paul’s stories, and Clayface got a highlighted scene in the prologue to League of Shadows, but on the whole, both of them have been on hold this year. Christopher Sebela, co-writing with James Tynion, does a solid job of reminding us of both character’s fundamental situations, but doesn’t provide a fully satisfying arc for either. Though the cyclical nature of both plotlines are possibly the function of being a short arc between longer storylines, these two issues aren’t quite as solid as Steph and Basil’s previously highlights in Detective Comics so far. While Basil gets a stronger sense of character struggle and personality, because neither character really connected with the other during the two arcs that opened this run of the title, there’s not enough connecting them with each other to really do more than switch back and forth – they can’t connect in the middle to provide mutual development, and thus Sebela must rely on simple parallel scenes.

The writing does a decent job on this task, though the combined requirements do make the issue feel like a third issue could have served everyone involved much better. The fight between Cass and Clayface is very well handled by Carmen Carnero from Sebela’s script, but Steph’s battle with Anarky has odd structuring and an unsatisfying conclusion. The center of the page, where Steph tells Batman she’ll handle the fight, is a bit large for a transitional eye-leading action, ending up feeling a bit uncertain in the flow of the fight. Furthermore, the limited space available makes Steph’s claim to know Anarky’s weaknesses a hollow boast, as Batman saves her just before she appears to be defeated instead of making good on her claimed knowledge. Earlier in the book, another slightly awkward panel choice appears when Batman interrupts Lonnie and Stephanie’s awkward “romantic” moment. Steph’s reaction should have been in its own panel, instead of being in the same panel as Batman’s appearance, as the sense of time is broken by Steph’s lack of reaction to Bruce’s sudden entrance. A last instance of lack of page-time available appears in the complete absence of Bruce re-connecting with Leslie Thompkins and the continued restoration of their relationship, after a decade of distance between the characters. Though the necessity of “A Lonely Place of Living” corresponding to “The Oz Effect” over in Action Comics probably forced the two-issue length, an additional issue would have given more chance to avoid such missed opportunities.

Despite these infelicities, Carmen Carnero does provide consistently strong, appealing work very congruent with the linework of Alvaro Martinez and Eddy Barrows, the main artists on the book. She also shines with the body language and expressions in the aftermath of Clayface’s violent rampage. The issue makes heavy use of two-page spreads, rather than more typical single-page layout. Carnero’s technique gives a sense of the scale of the locations involved, though the scenes involve don’t seem to exactly demand the wider format. While we don’t have any quietly lovely moments of lighting and color like the opening of last issue, Ulises Arreola gives everything a beautiful, bright look with his coloring, using a lot of well-chosen blacks to highlight the despair and conflict of the two central figures. Yasmine Putri’s covers also add to the issue’s emotional effect, calling back to the scenes with Cassandra and Basil performing Shakespeare with an “Alas, poor Yorick” reference to Hamlet.

The Shakespeare reference, though not directly picked up in the interior of the issue, does highlight the gentle, lovely relationship between Cass and Basil. Though Basil doesn’t seem to lose or gain any ground permanently, his desperation does seem to be increasing, held back only by Cass’s kindness and ability to help him to see the similarity between them, trying for redemption and atonement for actions not fully under each of their control, but still ultimately their responsibility. One wonders, though, whether Basil is actually like Cass, someone committed to doing right, or is he Clayface the monster? We see him visiting Glory, and his remorse for almost hurting Dr. October and Cass, but the little he does has the distinct quality of self-sacrifice that indicates the true heroic spirit. However, he has consistently helped the team, which is a point on the other side.

Steph’s storyline, though suffering from compression, does pay off the uncomfortable romantic tension from last issue, while also firmly rejecting the Steph/Lonnie pairing as lovers for the foreseeable future. However, the promise of more action from Anarky and the First Victim after their covert cloning of Steph’s phone adds to Tynion’s growing tapestry of threads weaving together in his hope for a sixty-six issue Bat-epic. As fill-in scripter, Sebela does a decent job of spinning the plates while reminding us that they are, indeed, still up there. Though a few moments of dialogue prove stumbles – Leslie Thompkins’ “Oh my holy cats,” Basil’s attempts to apologize after Cass manages to get the bracelet on his arm, no full-fledged falls appear. These fleeting moments, as well as the sense of lacking space to tell both stories fully, prevent the two-issue arc from being quite as strong as it could be, but definitely not from being very enjoyable in their own right.