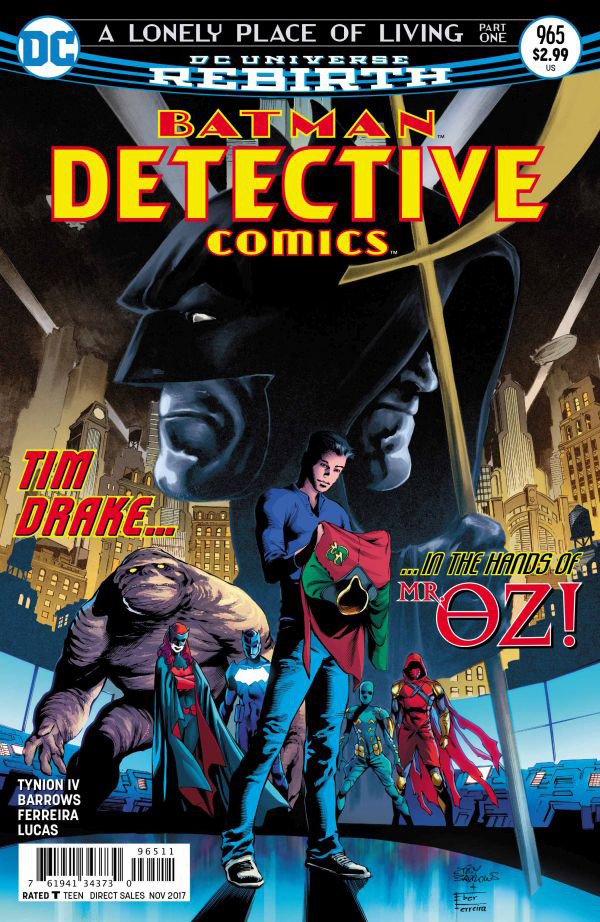 Synopsis (spoilers ahead): Years ago, Dick Grayson is shocked when a young Tim Drake approaches him after the death of Jason Todd, showing him pictures of Batman and Robin and telling him he knows their secret identities.

Now, trapped in an energy field by Mr. Oz, Tim, Red Robin, explains that he’s always wanted to counteract the darkness within Batman. He explains that he never wanted to be a hero, he just wanted to help Batman. The flashbacks continue, showing Dick refusing to become Robin again, instead going to help Batman as Nightwing. Oz asks why an ordinary teenage boy had to be Robin, and Tim responds that his unique perspective – seeing the big picture – and ability to fix things, made him the only choice. And once Tim had the taste of being a masked hero saving Batman and Nightwing from Two-Face, he knew it wasn’t something he would give up lightly.

Oz brings up the fact that Tim had decided to give up the mask before his abduction, and Tim said that helping Batman form the team which would keep the darkness at bay gave him options he hadn’t had before. Oz shows Batman obsessively searching for Tim, not sleeping for five days, and asks if Tim will take Batman’s place if he falls. Tim insists that he never wanted to be Batman, and when Oz attempts to taunt him that he can never leave the hero life, Tim turns the tables. He reveals that he’s been reprogramming the computers, realizing that Oz has a Kryptonian connection. Breaking free of the field, he attacks, insisting that Oz tell him everything – but Oz reveals himself as Jor-El, father of Superman, and claims to be a prisoner himself. Jor-El pleads with Tim to make the selfish choice, and not try to save people, so that “he” will not destroy everything he loves. Jor-El vanishes in a blast of green light, and Tim tries to broadcast a call for help to Gotham. He hears Batman’s voice, but this Batman says he’s a prisoner as well. Tim opens all of the cells, and rushes to find Batman. However, this Batman fires a massive pistol at unseen threats, and reveals that it’s the gun that murdered Batman’s parents, rebuilt to redeem it from evil. Batman pulls off his cowl, revealing that it’s Tim from the future, not Bruce, just as Doomsday (captured in Action Comics around the same time Tim was taken in Detective Comics) bursts through the wall.

Analysis: At long last, Tim Drake has returned to the forefront! With a couple of flashbacks and one “meanwhile” scene keeping him alive in our memories (and the hearts of some dedicated fans), James Tynion has started paying off several of the things he’s built up since the very first arc of his run on Detective Comics. In doing so, he’s also rebuilding Tim Drake, a process he started with Batman Eternal, but with the freedom to alter continuity, he’s decided to pump large chunks of A Lonely Place of Dying, Tim’s original beginning, into his aptly titled A Lonely Place of Living. Not only does this title highlight the connection to past continuity, but it also thrusts Tim’s choice into the forefront – what does he choose to do with his life, now that he’s on the verge of taking it back after months of captivity.

While Tynion doesn’t give any solid answers yet in this first issue, the appearance of Tim Drake as Batman starts hinting at his directions. With Tim insisting that the long-term life of the hero, especially taking on the Batman mantle, isn’t for him, the existence of a future version of himself who is Batman – but a much darker Batman – throws everything he thinks he knows into question. We as readers have a few options when considering this future Batman. Is he Tim Drake from Future’s End/Batman Beyond, who vanished at the same time as present day Tim Drake? Is he a different version who becomes the threat Kate Kane (Batwoman) faces in her bleak future a few weeks ago? Are those two options the same character? All these questions remain in the air, but some kind of connection between all these plot points hovers on the edge of the information we’ve been given, tantalizingly close.

Eddy Barrows returns to art duties after a very long absence (including guest spots on a few other titles). While a few of his faces show signs of awkwardness – particularly when Tim smiles – his layouts and general acting work demonstrate once again that Tynion is playing with a murderer’s row of artists. The dramatic colors demanded by the dark prison and the flashing effects of Tim’s battle with Mr. Oz show Adriano Lucas’s work well, as do the sepia toned flashbacks updated by Barrows and inker Eber Ferreira.

Speaking of updates, while Tynion does remove the “Tim almost gets his parents killed by the Penguin” aspect of the New 52 backstory, a few updates are still visible. This Tim was a teenager, not a preteen (as generally assumed in A Lonely Place of Dying). Mr. and Mrs. Drake may or may not be dead at this point – and this reviewer hopes not, as the fact that Tim’s parents were still alive was one of the only things that New 52 improved upon the old continuity, and it would be a shame to re-enshrine the dumber “grim and gritty” elements of the old continuity.

Tynion is here doing what he’s always done best – serving fans who love the history of their favorite characters while still maintaining a smooth, contemporary feeling in his comics. Not “retro,” but clearly in a line from the work of the classics, Tynion and Barrows starts off the next phase of Detective Comics with an extremely enjoyable bang.

Final Thoughts: “A Lonely Place of Living” starts out strong, with bold restoration of continuity and enjoyable characterization.