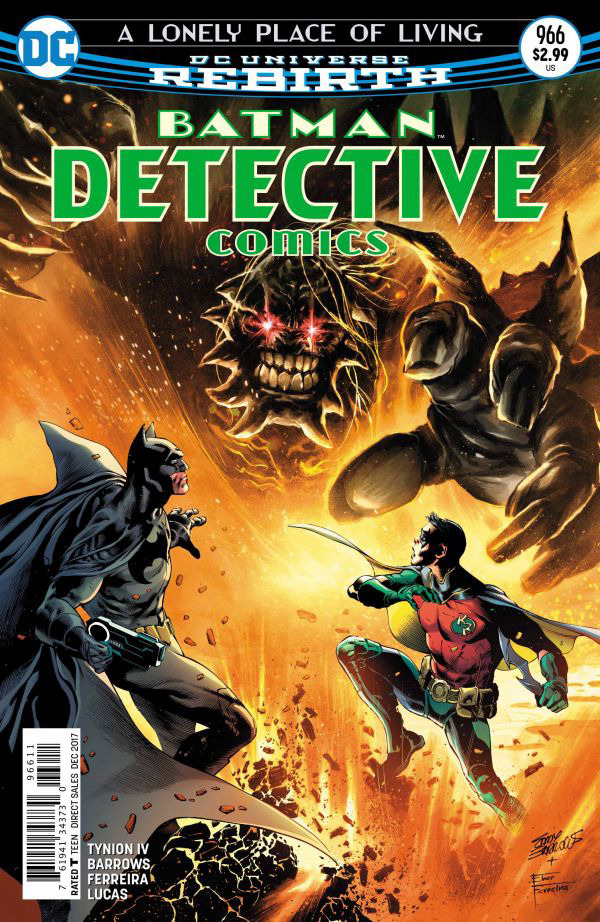 Overview: Tim Drake of Tomorrow and Today clash as they flee Doomsday!

Synopsis (spoilers ahead): In Gotham, far in the future, Anarky flees from a gun-wielding Tim Drake Batman. Though this dark Tim admires Lonnie’s ideals, he murders his opponent, then escapes Commissioner Renee Montoya. In his Batcave, Tim and his computer, named Brother, view a video of Lonnie and Stephanie Brown discussing their plans to fight Batman, but he vanishes into Mr. Oz’s prison as the recording ends.

In the present, Tim-Batman saves Tim-Red Robin from Doomsday with his gun. As they run, Batman tells Red Robin that he can get them both home, and that they’ve met before. Red Robin insists that he won’t become this dark vision, but Batman says he himself had the exact same thoughts in his own timeline, when Robin met the Titans of Tomorrow – and yet he became exactly the same person anyway. Tim says that Dick, Jason, and Damian can’t fill Bruce’s cape – but he must. Horrified at what his future self has done, Red Robin and Batman fight, each insisting that they know the right way to act. Doomsday breaks in again, but this time, Red Robin leads him to his cell using a holographic Superman, surprising Batman. Batman convinces Red Robin to come with him back to Red Robin’s Gotham, and they escape Mr. Oz’s prison.

However, once back, Batman tells Red Robin to reconcile with Superboy – but not the current universe’s Superboy, Jon Kent. Instead, he references Conner Kent, the cloned hybrid of Superman. When Red Robin evinces no knowledge of Batman’s former friend, he orders his suit computer to search the current timeline. Startled, he tests his theory by slashing Red Robin’s arm – and upon seeing the scan upon his own arm, Batman knows he’s free of his own dark future.

Knocking Red Robin out with his own suit, Batman sets off to kill Batwoman, the person he blames for his twisted future.

Analysis: The second part of James Tynion’s long awaited “return of Tim Drake” story brings a lot of context. We see Tim Drake’s dark future, and get some context that ties this version of Tim as Batman firmly to Geoff Johns’s popular (if controversial) Titans of Tomorrow storyline from over ten years ago. Tynion clearly has a lot of fun with the setup, playing with all four Robins and the way they might struggle with the role of Batman in this dystopian future, as well as many continuity references like Tim’s implied use of Brother Eye as his suit computer system. Borrowing elements from thoughtful sci-fi movies like Looper, Tynion’s constructed a fascinating setup and contrast between the Red Robin Tim Drake, full of hope and plans, and Batman Tim Drake, nihilistic, but still committed to doing what he sees is right.

Eddy Barrows, continuing his strong return to Detective from last issue, continues to shine in the dark, deeply shadowed world of Titans of Tomorrow. Though his Batman Tim isn’t as differentiated from Batman Bruce as could be wished, the creativity of his layouts and strong character work remind the reader why Barrows helped establish Detective as one of the best art team books on the market when Rebirth launched. Eber Ferreira’s delicate inks and Adriano Lucas’s moody, often painterly colors enhances the rain-soaked and explosive issue, drenching it in mood and emotion.

While several questions remain at the end of this issue – from the likely forever ignored plot thread of the Batman Beyond/Future’s End Tim Drake Batman disappearing a year ago (probably originally was going to be Tim’s Ghost of Yet To Come, but Tynion and/or his editors decided to go with a bolder choice) – to the question of why Future Tim and Batwoman are at such deadly odds – Tynion and Barrows continue one of the most exciting Batman storylines of the year. And coming at a time when Batman’s status quo faces the shakeup of an engagement with Catwoman, as well as a multiverse-destroying event in Metal, that’s saying quite a bit.

Final Thoughts: Our long-awaited return of Tim Drake brings one too many Tims home to Gotham.