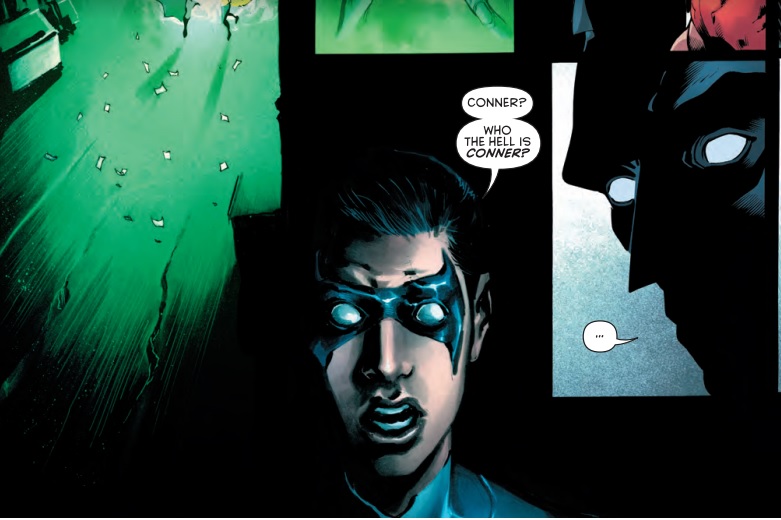 During New York Comic Con, The Batman Universe was able to sit down with James Tynion IV to discuss Detective Comics. Now that Detective Comics #966 is out, we can share some of the more spoilery details from that conversation.

One of the biggest things on our minds was the “Conner” moment from Detective Comics. When asked if it would be followed up on, Tynion replied:

You’re going to have to keep on reading, but for right here and right now it’s particularly in Detective Comics which is much more about Tim Drake’s life in Gotham City and his connection to the Gotham characters. I still wanted to point to the fact that there is something missing that Tim is still reaching out for, but doesn’t have. It’s in the title. It’s “The Lonely Place of Living”. It is fact that he had these really close relationships that have now been taken away from him due to the nature of the changes in the timeline. We’re going to see him struggle with that a bit and learn a bit more about that as time goes on. But in this moment, it’s more a means to point to, this dark Batman that Tim becomes is this dark figure that comes out of loneliness. It comes out of isolation. Which is the same thing like in the full irony of what Tim saw Bruce Wayne/Batman missing all those years ago. But because Tim is alone he sort of falls all the way into the dark because nobody caught him as he caught Bruce.

On the subject of Tim Drake, Tynion elaborated on the decision to restore his original origin:

It was one of those things that so much of the ethos of Rebirth is going back and make sure that the versions of these characters that are existing on the page are the versions that fans of the characters know and love. Going back to the beginning of Rebirth you had a moment like the new Red Hood and the Outlaw series started with a reaffirmation of Jason stealing the wheels off the Batmobile. These characters, especially the Robins, their origin moments are the ones that really shape their personalities for the entire run. Tim had a different origin for a bit that didn’t speak as well to the core of the character. It was imperative for me to find a way to bring it back. When I went in to talk about the story we were going to build in “Lonely Place of Living” with Geoff Johns he was very much on board with what we wanted to.

When asked if the Cassandra Cain/Basil Karlo interaction would lead to a love connection, Tynion was quick to set the record straight:

It is definitely friendship because she is definitely fifteen years old and he is definitely in his mid-thirties. It is something where both of them see each other as..…at their core they kind of believe themselves to be monsters. Cass even now hasn’t been able to get over the fact that she killed someone once. Because she was built to be an assassin. She completed her first job and that broke her in a real way. She was built to be this heartless killing machine. She was built to be a weapon. She still believes that she’s atoning for that one moment. And Basil, he’s succumbed to being this monstrous figure that everyone saw him to be after the accident that turned him into Clayface. In each other they sort of see this acknowledgement that they’re being given this second chance that they’re not sure they deserve. We saw that in the two-parter with Anarky last month where Basil kind of collapses in the Belfry and is just like “This is who am I. I’m this horrible thing. What am I” and she’s like “Same as me”. They have a very powerful bond and connection, but it’s definitely a deeply powerful friendship.

Regarding the rumors that he would be having Bruce adopt Cassandra again:

That was a very powerful moment in Pre-Flashpoint continuity. Because it happened after an era where Cassandra was already fading out of the universe it wasn’t explored. It was an acknowledgment to the fans of the importance of Cassandra while she was becoming less important. I don’t want to fall into that same trap. It is very important to me to establish firmly how important Bruce is to Cassandra and Cassandra is to Bruce. That is something I am very eager to explore upcoming this spring in particular in “Detective Comics”.

I asked if the engagement of Batman and Catwoman would be addressed in his title:

Tom is going full board on that story.  There might be small touches here and there. These are stories that are happening in conjunction with each other. If Tom’s Batman is “Batman in the cave”, this is “Batman in the Belfry”. This is his day job in a way. It’s a little less about his family life which  is why he we don’t see characters like Damian in Detective Comics.

Tynion closed the interview by giving us some hints at what would be coming next:

The arc after “Lonely Place of Living” is called “Fall of the Batmen”. Check that one out! Thematically it’s a sequel to “The Victim Syndicate”. It’s Tim Drake coming back into the fold and he’s trying to recapture that core optimism that he had right at the beginning of the program but he’s deeply shaken by the events of “Lonely Place of Living”. This is going to be a really dangerous and frightening time in the Batman Family. In #966 we have hints at something that Batwoman does that breaks up the family. We’re going to be seeing what that is [in the next arc].

Sounds like we have some great stuff ahead! Detective Comics #966 is out today and you can read our review of the issue here.