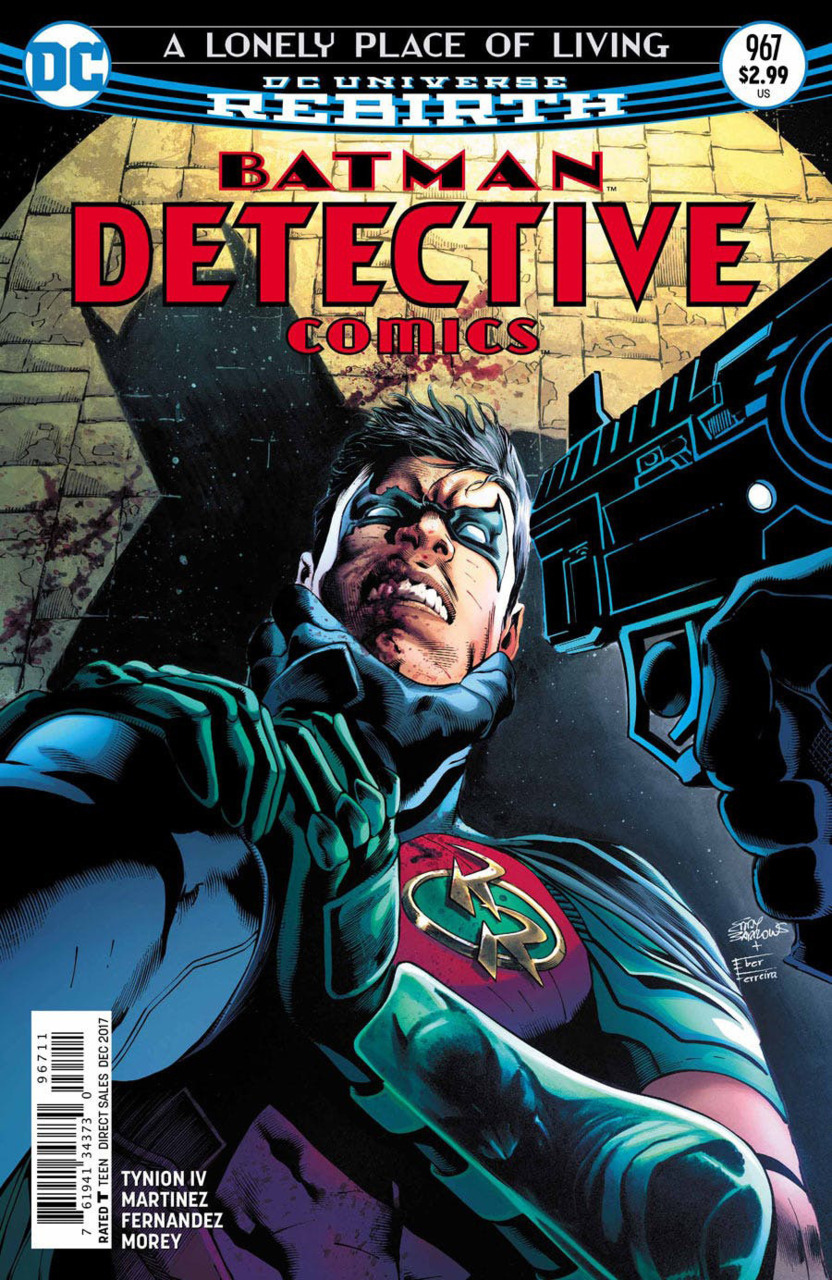 Overview: Red Robin Tim reunites with the team, but Batman Tim from the future has dark plans afoot.

Synopsis (spoilers ahead): Bruce obsessively replays the footage of Tim’s “death.” When Alfred begs him to sleep, he replies that Tim must have assumed he was coming for him, but he wasn’t. Suddenly, Alfred notices Tim’s distress beacon lighting up their board. The Batmobile ROARS out.

In a hospital, an unconscious Tim walked into the ER just before passing out. Batman pulls up as they resuscitate Tim. Changing quickly into street clothes, he barges into the hospital room, and orders them out (since he owns the hospital). Tim weakly greets Bruce, and they embrace. Bruce wants Tim to heal, but Tim warns him of his dark future self, asking about Batwoman.

Meanwhile, a buzzcut Bette Kane is catching up with her cousin Kate, Batwoman. Though Bette wants in on the team as Flamebird, Kate is still strict about her staying out of costume until she’s sure she’s ready. Kate receives a call to the Belfry, and leaves a disgruntled Bette.

At the Belfry, Cass hugs Tim fiercely as Kate arrives. He fills them in on his future self’s plan to kill Kate, then asks about Spoiler.

Steph, meanwhile, swings back to her secret lair. She greets her own trophy case of her father’s Cluemaster guise sadly, and tracks global crime. Unbeknownst to her, Future Tim Batman is hiding in the shadows, and apologizes quietly before leaving. Steph hears something, but Batman is gone.

Kate, in the cages that held her father and the Colony captives just months before, is not happy. But Tim insists that his future self is coming for her. He reveals that he planned to call the team the Gotham Knights, and Luke finally gets an answer to his first question from the Victim Syndicate arc. Bruce and Tim confer about what they think Future Tim’s plan would be, and they realize he’d go “home,” to Wayne Manor.

Future Tim meets Alfred in the greenhouse. They hug, but before Tim can ask Alfred’s advice on whether to pursue his dark plan to prevent him becoming Batman, Nightwing, Red Hood, and Robin arrive to send him back to the future. Future Tim holds his own, since he’s been fighting simulations of the three Robins in his own timeline for fifteen years. When Red Robin Tim and Batman arrive, he reveals his real reason for coming to the Batcave: to activate the Brother Eye program.

Analysis: James Tynion’s love letter to Tim Drake and the comics of the late 90s and early 2000s continues to be a massive success. With masterful weaving in of details like Tim’s name for the Team, Bette Kane’s appearance, Future Tim’s plan hinging on the evil Brother Eye program, and so many more moments, he never forgets the emotional moments. And all of those focus on reunion – between Bruce and Red Robin Tim, between Future Tim and Alfred, between all of the Robins and a dark future Batman, between Kate and her cousin Bette – all of them perfectly judged, playing different emotional notes.

Alvaro Martinez lends a hand this issue for penciling duties, and his brilliant, clean-lined appeal and attention to detail compliment Eddy Barrows’ strong sense of emotion, horror, and layouts. Balancing a good blend of detailed character work with gorgeous large panel splashes of several characters, Martinez really captures the many moods Tynion walks our team through perfectly. As usual, Raul Fernandez’s inks highlight Martinez’s linework, and Tomeu Morey and Jean-Francois Beaulieu’s colors are awash with shadow and light, with many scenes full of warmth or horror as the mood demands. The final page, drenched in the evil glow of Brother Eye, proves a wonderful cliffhanger for the next issue.

We know from solicitations that Future Tim will survive the current arc, but take on a different identity, becoming a new antagonist for the Super Sons of Tomorrow crossover (including Superman, Super Sons, and Teen Titans). Thus, we expect he’ll undergo a significant defeat in the finale next issue, but not one that destroys his ability to continue to pursue his plans – though what those plans might be ultimately, since we know that he won’t kill Batwoman, we’ll just have to wait and see.

Final Thoughts: Tynion continues his dark but joyful return of Tim Drake, highlighting the choice he will have to make next issue between dark and light.