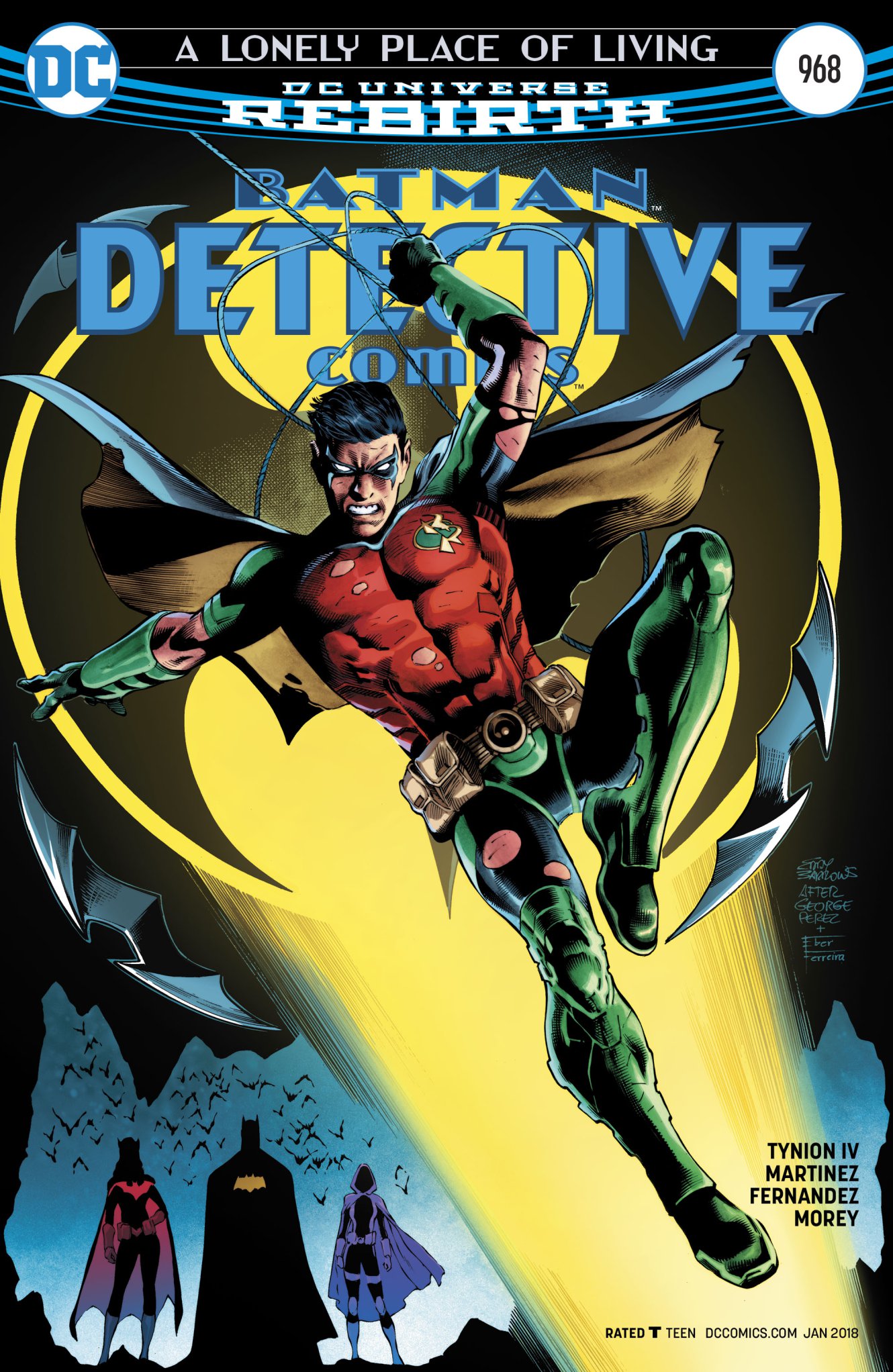 Overview: “A Lonely Place of Living” concludes as Tim confronts his future alongside his family.

Synopsis (spoilers ahead): Ulysses Armstrong, “The General,” works sullenly in the Colony airship, composing a letter of complaint to Colonel Kane about his punishment for attempting to destroy Gotham with nanites during the League of Shadows assault. He notices that his stolen Red Robin suit is registering Tim’s presence, but before he can do anything about it, Brother Eye takes control of his drone fleet. Initially worried, Armstrong decides to watch his murderous machines try to kill Batwoman instead of warning his boss.

Meanwhile, in the Batcave, Tomorrow Tim Batman fights off all four Robins (Dick, Jason, Today Tim, and Damian) as well as Bruce. Tomorrow Tim claims he’s trying to prevent any of the Robins from becoming Batman in the future, but before he can succeed, the time stream starts trying to yank him away from our heroes’ “present.” Tomorrow Tim knocks Batman out by playing with Bruce’s worst fear – that the Robins will die because of his mission, then stunning him with an electrical charge. Brother Eye tells Tomorrow Tim that his tachyon charge (the particles which connect him to the time stream) is increasing indicating that he’s running out of time, literally. Following the drones Brother Eye has commandeered from the Colony to the Belfry, Tomorrow Tim leaves the Robins to fight off Brother Eye controlled Batmobiles, though Today Tim sees him leave.

In the Belfry, the drones break through the defenses, and though Batwoman tries to get the other Knights (Cassandra, Luke, Jean-Paul, and Basil) to leave, Cass insists that they fight together.

Today Tim follows his dark future self to the underground train system he designed, but Tomorrow Tim anticipated that, and uses the time spent in transit trying to convince Tim to give up Batman’s mission. Today Tim refuses, and gets knocked out for his determination to do the right thing.

Tomorrow Tim has Brother Eye pause the drone assault and put a force field around himself and Kate. Tim tells Kate she disappointed him, and that in just a few weeks, she will destroy people and set off a chain of circumstances that leads directly to him being forced to become Batman. As he raises his gun to murder Batwoman, a batarang strikes it, breaking it. Tomorrow Tim is stunned that his power in the Belfry has been broken, but Today Tim and Batwing have worked together to defeat Brother Eye long enough so that Tomorrow Tim will be sucked back into hypertime. Furious, Tomorrow Tim orders the drones to destroy the whole building, but Batman and the Robins, flying fighter jets old enough to be more difficult for Brother Eye to control, destroy the robots. Today Tim appeals to his older, despairing self, saying that the life of a hero doesn’t have to be a lonely, nihilistic one. Tomorrow Tim weeps, believing that he has failed to save his past self and those he loved in this time frame from the future he hates. The time stream reasserts itself, sucking Tomorrow Tim away, leaving Red Robin standing alone at the window of the Belfry, the words of his future self ringing in his ears: that everything he loves will fall apart, and he will become this dark vision, whether he wants to or not.

Analysis: James Tynion’s tribute to Tim Drake’s past, present, and future, “A Lonely Place of Living”, concludes with a huge collection of bangs. The resolution of the conflict between Tomorrow Tim and Today Tim doesn’t actually resolve anything, since it’s ultimately a waiting game on our hero’s side until the laws of the universe take away his enemy, and we know Tomorrow Tim will be presumably returning to this time stream to torment Damian and Jon Kent over in Super Sons and the other Super titles in a month or so. As a result, this four-part arc feels a bit anticlimactic, though that feeling is definitely on purpose, similar to the ending of The League of Shadows arc, where the main antagonist is defeated, but in such a way that leaves a huge number of relational and plot threads dangling for Tynion’s plan to reach Detective Comics #1000 during his run. On the one hand, this allows for a tense, continuous read, rewarding long term readers who have been reading for years for payoff. On the other hand, the payoff almost certainly can’t live up to the combined weight of so many expectations derived from arc after arc deferring satisfaction. Though the character interactions Tynion writes are consistently a joy – in this issue, not only does he include nearly the entire Bat-Family (the Gotham Knights team and the Robins, only really missing Batgirl and the Birds of Prey), but he zooms in on the relationship between Tomorrow Tim and Today Tim. The way Red Robin refuses to fight once Batman of Tomorrow is beaten, and his conviction that being a hero doesn’t have to be a self-destructive path, show us how important Tim is to the relationships of the Bat-Family. Including a glimpse of one of Tim’s many foils from Chuck Dixon’s run on Tim’s title in the 90s, the General, gives us even more facets to the reasons Tim’s optimism, his determination to do the right thing and still be happy, give great hope for the future of this team with Tim back in the center of things.

Alvaro Martinez, as always on Detective, provides stellar pencils, with Raul Fernandez enhancing his strong, appealing linework. Tomeu Morey finishes out the art team with his strong colors, providing some creepy time-stream effects on Tomorrow Tim. There is perhaps a sense that the double-shipping schedule continues to stress the art-team’s’ ability to provide really top-notch work – some of the lines seem a bit hasty, less well judged than the beautifully clean and confident lines of the Intelligence arc, but Tec remains a simply gorgeous book to read. One hopes that the coming fill-in artists in the next few months maintain the high standards the two main artists have set.

Final Thoughts: Though robots, time travel, and explosions fill this issue, the heart of it remains a bold statement about the nature of Tim Drake, hopeful hero.