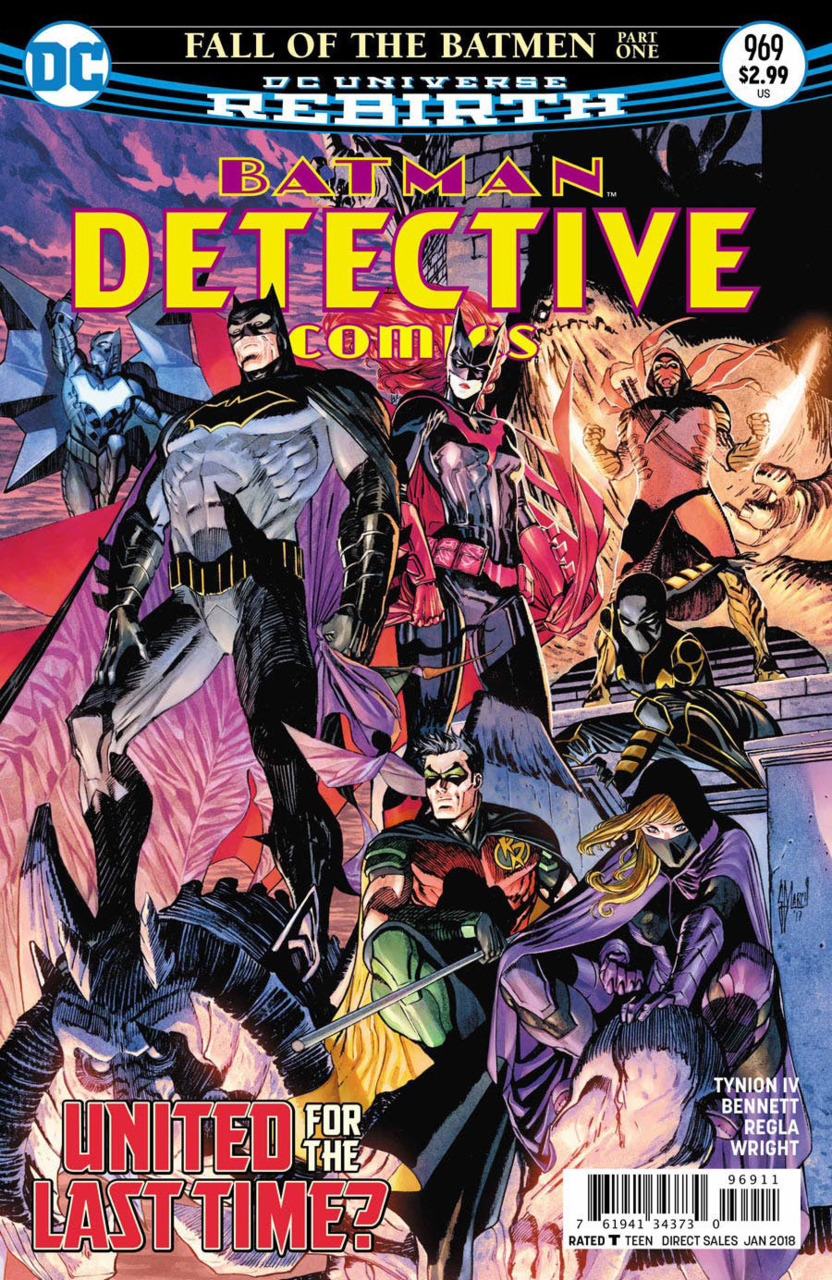 Overview: Spoiler (Stephanie Brown) discovers Red Robin (Tim Drake) has returned, but behind the scenes of the joyful reunion, dark forces are afoot.

Synopsis (spoilers ahead): The newly appointed mayor of Gotham (after Shiva murdered the last on in League of Shadows), Michael Akins, former Commissioner, is making a speech on the steps of City Hall. He affirms that Batman may be necessary for Gotham, but says the idea of a paramilitary team is dangerous.

In Arkham Asylum, Stephanie Brown visits Anarky, Lonnie Machin, in disguise. Lonnie preaches his ideology of overthrowing the structures of society, including Batman, and Steph wavers as she leaves. Basil Karlo, visiting Glory (Mudface), sees her and calls out. She brushes him off, so she doesn’t hear the news he tries to tell her about Tim’s return.

In her secret base, later, Steph talks to herself, struggling with Lonnie’s arguments and her own inconsistency. Suddenly, she hears a knock, and goes to the door. We see her face go through shock, disbelief, then amazed joy as the person at the door goes through a speech – and then she jumps him, revealing that it’s Tim, back from the dead. Steph kisses Tim fiercely.

Three weeks later, Killer Moth gathers henchmen representatives from several villains in a warehouse, proposing the villains form a team to counter the Gotham Knights’ stunning efficiency in quelling crime. Kate Kane (Batwoman) and Tim sit above, watching as Moth reveals his muscle (Solomon Grundy, Ratcatcher, Zsasz, and Firefly). Kate tells Tim he needs to tell Steph he isn’t planning on quitting the team and going to college anymore, but he deflects, not wanting to stop the “honeymoon” of him being back with Steph and Steph being back with the team. As Killer Moth finishes up his sales pitch, Grundy reveals that he’s really Clayface, and the team attacks in full force.

Batman pays Mayor Akins a visit, wishing him congratulations. Akins says that the team’s crushing of crime is helpful, but he’s scared of the militarization of the team, the use of teenagers, and of course, Clayface. He asks Batman where this ends.

Meanwhile, in Arkham, Lonnie and the First Victim assemble their team, along with the guards they’ve suborned. The First Victim claims that the Knights will be betrayed by one of their own, and Gotham will fall.

Analysis: After the stunning and splashy “Lonely Place of Living,” Tynion takes a short breath with the beginning of this issue before jumping right into the establishment of the new arc, “Fall of the Batmen.” Veteran penciller Joe Bennett (recently seen in Deathstroke) provides appealing and bold linework, complemented by the heavy, moody inking of Sal Regla. Jason Wright provides solid colors, and Guillem March starts his run of covers for the title with a beautiful spread of the entire team, united at last – but as the cover text hints ominously, perhaps for the last time. Tynion and Bennett provide really excellent work throughout with the visuals, especially with references like the way Steph jumps Tim and kisses him fiercely, paralleling the dramatic panel where Tim lifts Steph in the air and kisses her when she is revealed to be back from the dead in Robin #174. There are some times when a pose feels a bit awkward, or a detail doesn’t work quite as well – the angle of Steph’s face when she tells Tim to shut up before she kisses him seems a bit far back – but on the whole, Bennett joins Carmen Carnero in providing a fill-in issue that doesn’t quite meet the amazing excellence of the main art team of Alvaro Martinez and Eddy Barrows, but fits perfectly with the visual style of the book, and is fine work in its own right.

On the scripting side, Tynion ties up some of the threads missing from the end of “Lonely Place,” especially of course Tim’s reunion with Steph. Of course, he also immediately sets many balls in motion, with Anarky and the Victim Syndicate’s plot, Tim hiding his true plans from Steph, the new Mayor’s fear of what the Gotham Knights means for the system of the city, and more. The last thread – Mayor Akins – provides a bit of worry for Stephanie Brown fans, as he was last seen prominently in the controversial and much decried 2005’s crossover War Games. Steph’s current position in the Bat-Family is precarious – we see her joy at being reunited with Tim and Cass, but Tim’s lack of complete honesty means that reunion is on shaky footing, and none of her philosophical differences with Batman have been truly answered. Solicitations indicate that she’s has “unresolved issues” with the team, and Tynion’s said that she’s a huge part of the plotline closing out this year’s storyline in Detective Comics.

The way Tynion shows us the good and bad side of Tim’s terrifyingly efficient work in guiding the Gotham Knights – as heroes, destroying Killer Moth’s team of killers – but also as a very dangerous gray area for a city’s democratic system from the Mayor’s point of view – shows that he’s definitely interested in resolving the questions Steph raised way back in The Victim Syndicate (and their return only underlines that line of thought). For all that Tynion gushed on Twitter that he’s writing Tim Drake fanfic, he’s clearly put a huge amount of thought into constructing a long-form plot with not only great action beats like the raid on Killer Moth, but serious questions about Batman, Robin, and the whole Bat-Family’s purpose and role in the city.

Final Thoughts: “Fall of the Batmen” begins with a complex and satisfying tapestry of plot threads.