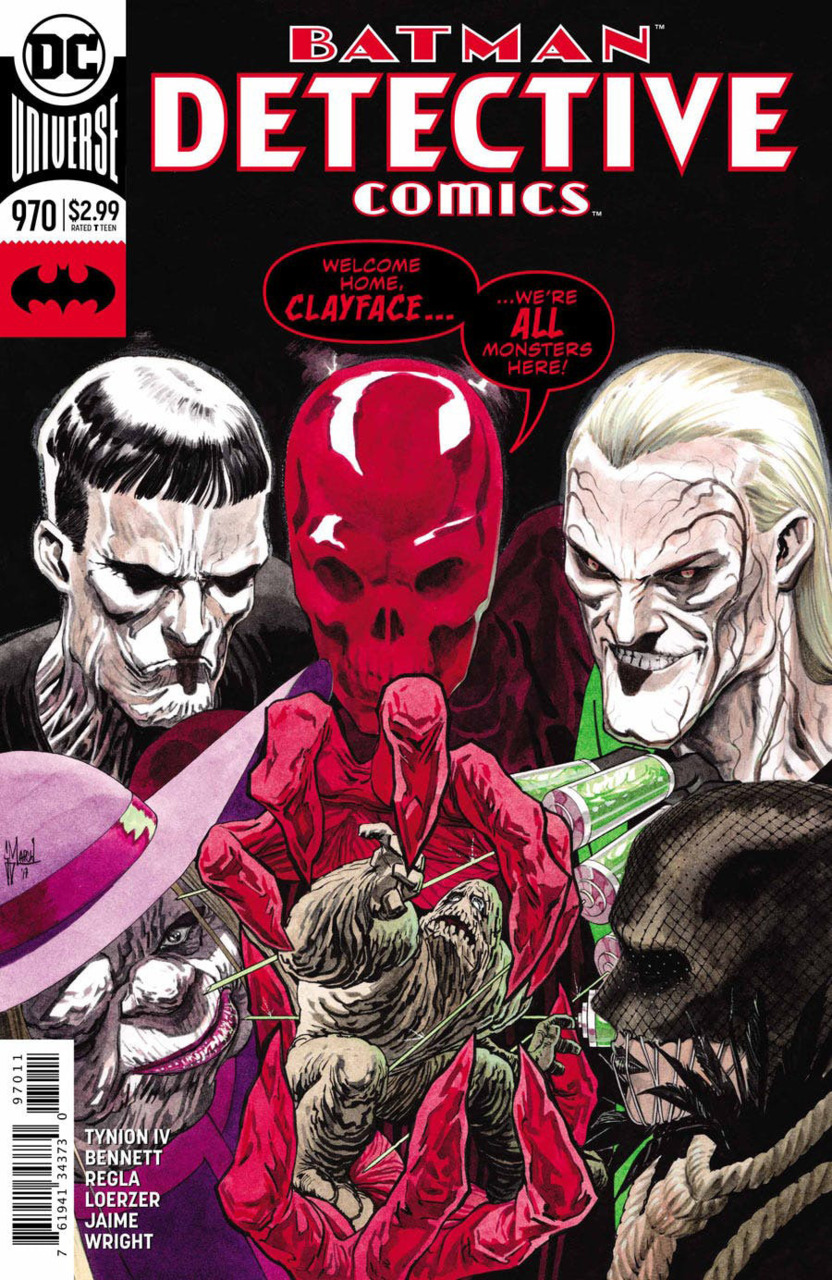 Synopsis (spoilers ahead): Asleep in his Belfry chair, Tim Drake (Red Robin) dreams of Bat-Tim’s warning to him – that everything he just returned to will be over sooner than he can imagine. He wakes, sweating, to Stephanie Brown (Spoiler) leaning over him in concern. He brushes her worry to the side, even though it’s been four days since he’s had a real sleep in a bed (similar to Batman, who over in Justice League #34 went three days without sleep, with disastrous consequences). He takes “micronaps,” but Steph reminds him he “died” just months ago. Still impatient, he tells Steph all the ideas won’t let him rest for too long – organizing all of the Bat-Family, coordinating (secretly) with the police, planning patrols of the entire city with all the manpower, even starting a Bat-Ambulance service with Leslie Thompkins. Steph begs him to slow down and listen to himself, but Tim feels like he can’t miss his chance to reshape the world.

Batman and Batwoman, riding motorcycles, discuss the Batman’s premonition of danger. Azrael and Batwing open up a truck full of cyber-assassins. Batman and Batwoman notice that the assassins use the same stances as the Knights, and Batman connects it with Mayor Akins’s footage of the team’s activities.

Meanwhile, Dr. October consults with Clayface, telling him that a cure is almost possible. He wants to give it to Glory Griffin – Mudface – first, since he’s still not sure if he deserves a chance to be better. Orphan (Cassandra Cain) walks in, asking if Basil is ready, and he tentatively agrees.

At Batwoman’s HQ, she takes off her uniform, and her father appears. He helps her with her injuries from the cyber assassins, despite her hostility from his betrayal with the Colony. He tells Kate that the Colony has also gotten the video footage of the team that the Mayor and villains have – and that Red Robin has reached out to the Colony to see if they can work together. He warns Kate that if Tim doesn’t stop expanding Batman’s “army,” the government may be compelled to step into Gotham, and that something darker is also afoot, hidden by Tim’s efficiency.

As Cass and Clayface take down the cyber assassin factory, she tells him to take this chance at life. Leave the fighting behind, and she’ll help him be good.

Tim calls Steph to the Belfry, and accuses her of leaking the footage to all the various groups. She agrees that it was her phone, but proves that Anarky is behind the distribution. She goes to find out Lonnie’s plan, and tells Tim angrily that by assuming she would betray the Knights like that, he has betrayed their relationship. She also reveals that she knows he doesn’t plan to retire like he did before his “death,” and tells him she’s leaving – not sure if she’s just exiting, quitting the team, or breaking up with him – or all three. After she’s gone, Tim pulls up Anarky’s cell feed from Arkham, and sees it empty.

At Arkham itself, Clayface is offering Glory the cure. Guards rush in, stunning Clayface, and she reveals that the Victim Syndicate has revealed footage of his work with Batman to the media. Clayface asks her why she’s doing this, and she says she can’t forgive him and let him try to live a good life. As she reveals her plan, the First Victim and Anarky come up behind her.

Analysis: It’s been a year and a half since James Tynion began his run on Detective Comics. In those thirty-odd issues, he’s started a truly staggering number of plates spinning, giving each of his arcs a surface-level resolution, but allowing threads to start to collect in a framework of hanging swords to drop on the heads of our heroes. In this arc, The Fall of the Batmen, those threads start to snap, and the destruction is mighty and tragic. Clayface, though supported by Dr. October, and heartbreakingly, by Cassandra Cain, who (incorrectly) sees herself as even more of a monster, tries to do the right thing by his victim Mudface, only for it to trap him in the Victim Syndicate’s clutches. Tim desperately tries to outrace the future Bat-Tim warns him of, but like a Greek prophecy, his efforts turn into the very thing he fears, as Jacob Kane shows Kate with his grim warning of government intervention against Batman because of Tim’s overreach. Steph’s distrust of Batman and his methods are seemingly confirmed by Tim’s lack of trust in her, leading to the confrontation hinted since she was encouraging him in issue 935 to make choices about his future.

Tynion’s excellent management of all these plots is ably assisted by Joe Bennett’s pencils. Though inks and colors remain too heavy for Bennett’s work – he benefits from much more delicate finishing and a palette with a much lighter, less shadowed theme (such as seen in his recent work for Deathstroke with Christopher Priest, or his classic run on Birds of Prey with Gail Simone) – his clear, appealing figure and expression work still provides a sense of energy and solidity. Though a major point of weakness artistically is the depiction of Clayface – Bennett’s stocky, overly cylindrical and bullet-headed monster simply doesn’t have the power of Eddy Barrows’ or Alvaro Martinez’s terrifying, but tragic figure. Tynion does work with Bennet to provide a lot of classic gridwork layout, showing perhaps the trapped nature of his team in this long-running scheme by the Victim Syndicate, and making frequent use of Tynion’s love of a good two-page spread.

The conflicts between Tim and Steph and Clayface and his past form the center of this arc, though Kate gets a strong scene with her father as well. Both of them pay off much more carefully the conflicts handled unsatisfyingly in the Utopia/Dystopia arc, and show again Tynion’s development as a writer. In 2014, during Batman Eternal, his ability to guide that kind of conflict carefully was much more limited, showing up in such awkwardly handled conflicts as Bluebird lecturing Spoiler on not giving up. Here, all of the characters are much more assuredly handled.

Final Thoughts: All of the plot that have been waiting for over a year – the Colony, Steph’s rebellion, Tim’s big plans, Clayface’s redemption, the Victim Syndicate – begin to crash together, with catastrophic effect.