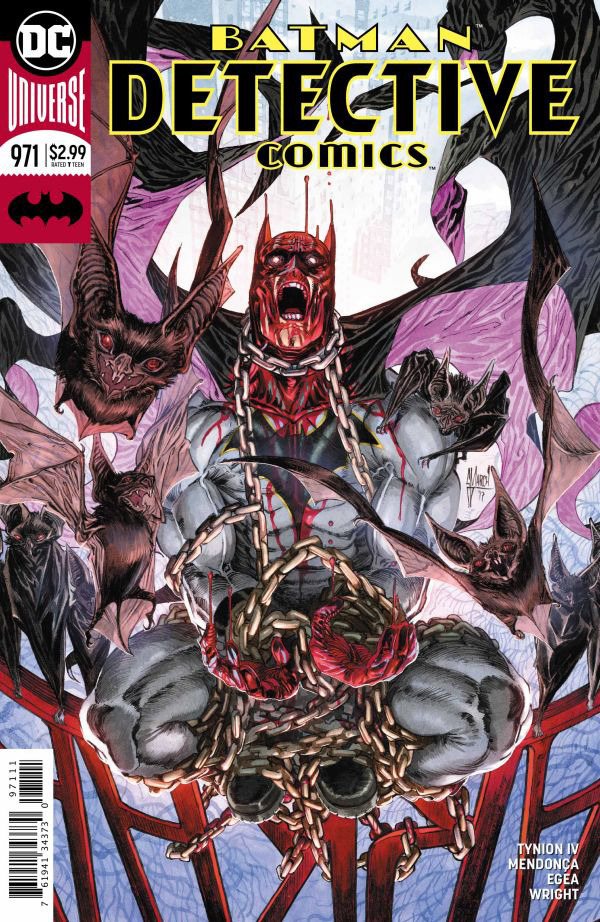 Overview: The Victim Syndicate’s plan divides the Gotham Knights team so that their ultimate weapon can do the most devastating damage.

Synopsis (spoilers ahead): At Arkham Asylum, the Victim Syndicate has taken over the facility. A very nervous young reporter is greeted at the gate by Abigail, Madam Crow, and Anarky, who take her to the First Victim. The Victim monologues a bit about how Batman is the true villain, and the Syndicate just wants to help. Mr. Noxious claims credit for the murder of the police in the Syndicate’s last attack, and the First Victim orders the Mute to silence him. The reporter sees Clayface, deprived of his bracelet which allows him to keep his human shape and moral sense, and Glory, aka Mudface, wants to tell the world about Batman using Clayface as one of his operatives.

In the Belfry, the Knights see the news reports. Cass is devastated at Clayface’s predicament, while Tim (Red Robin) tries to catch up, since he was “dead” during the first attack. Batman tells him that the Syndicate wants him to unmask. Stephanie Brown (Spoiler) returns, telling them that the Syndicate is using her cloned phone, and thus she feels responsible and wants to stop them. She tells them that she infiltrated a planning meeting for a huge protest a few weeks ago. Tim feel betrayed, but Steph says she didn’t know the scope of the plan at the time. Tim still challenges her, asking her what she wants, and Steph snaps back that she just wants to save broken people from dying for a mad crusader. The team attempts to formulate a plan, suggesting a pincer assault, collaborating with The Colony, and gets bogged down in recriminations until Cass reminds them that Clayface needs help now. Batman decides that he’s going in alone after receiving a furious call from Mayor Akins, threatening that if he does anything except come alone to Arkham, the city will treat him as an outlaw. He splits the team in half to deal with the multiple protest sites, and heads off to the Asylum.

In the meantime, Mudface tortures Clayface with an electrical prod, trying to break him down to his monstrous, conscienceless state again. She declares that her only goal in life is to hurt him in revenge for what he did to her.

Commissioner Gordon waits at the gates to Arkham, telling Batman that he has always had problems with Batman putting kids in danger, which has pushed him to agree with Mayor Akins. Batman, betrayed, nonetheless walks into the lion’s den. Anarky walks him from the gate to the Asylum, and Batman tries to reason with the young man. Lonnie counters Batman’s appeal to his better nature with the argument that Batman has created his own oppressive system to replace the oppression of crime that controlled Gotham before he existed. The First Victim greets Batman with a hundred guards, all wearing the Victim’s signature bloody paint on their heads. Batman implements a Joker backup plan, sealing the Asylum completely, and fights all of the guards and Syndicate members by himself.

At the protest, Red Robin tells Orphan and Spoiler that none of this makes any sense – the protests don’t disrupt anything serious in the city. Orphan notices that the locations are all over sewer hubs, just as Batman finishes the Syndicate’s troops. He deactivates the Asylum seal and calls in the police, but realizes too late that the Syndicate wanted him to bring in the cops so that the newly enraged and monstrous Clayface would break free and destroy them all.

Analysis: Many fans have commented with the return of the Victim Syndicate that this group of hodgepodge villains poses little physical threat to the hyper trained forces of Batman and his allies. However, the first arc showed with their manipulation of Stephanie Brown, Spoiler, that their true goal is to turn Batman’s allies against him. Here, Tynion finally pays off the Sword of Damocles that is Clayface, always present since his first melancholy appearance in #934. Though some of the things shown here are a bit questionable – such as how electrical shocks affect Clayface here when he is sometimes shown to be immune to such weapons (though, to be fair, not so far in Tynion’s hands). One could say that since the Mud Room uses some kind of electrical control over Clayface’s excess material to create a simulator to train the team, it’s part of the long game setup that Tynion has been running. Emotionally, however, it’s horrifying but completely set up in the relationship between Glory Griffin and Basil Karlo how she has played the silent listener, pretending to have some sympathy for the man who turned her into a monster until she had the chance to return the favor.

Many fans will doubtless be outraged that Basil, whose struggles to atone for those he’s hurt and killed have provided a huge part of Detective Comics’ appeal from his surprise inclusion on the team as part of Rebirth, not to mention the clever use of powers as part of the team, is being forced to succumb to his worst nightmare. To some extent, it could be a bit of a cop out, since none of Basil’s choices after he’s been on the path of redemption have been the deciding factor for his relapse into monstrosity, leading to a sense of unfairness. However, it does increase the tragic nature of this plotline, since there’s almost no way for Batman to continue working with Clayface after the publicity this attack will get. Furthermore, though Clayface’s defeat is assured, since he is in a Batman comic, after all, it’s hard to see how Bruce can beat a monster which he’s trained himself, especially since his team is scattered throughout the city.

Miguel Mendonca, providing fill-in pencils this issue, does strong work with the characters. His faces tend to be similar to another veteran fill-in artist for James Tynion comics, Scot Eaton, that they are somewhat generically appealing. Though not quite as individual or strongly meshing with the main art team as fellow Tec fill-in artist Carmen Carnero, Mendonca turns in a very solid issue, mimicking Eddy Barrows’ penchant for horror designs and rendering with the focus on the Victim Syndicate. His Clayface at the end is one of the scariest depictions of the character yet seen in the series, even compared to Alvaro Martinez’s multiple-mouthed version. The colors and inks by Jason Wright and Diana Eger provide an excellent polish, continuing the tradition of Tec being one of the best-looking art books in the DC universe.

Tynion and his collaborators have been weaving the tale of the Victim Syndicate, Spoiler, Clayface, and Batman for over a year, and this appears to be the culmination of that meta-arc. The pacing for this arc has been almost breakneck, rocketing from Tim’s return to the new mayor’s conflict with Batman, to Tim’s increasingly terrifying plans, and smashing into the Syndicate’s revelation. The final two issues of the arc promise even more action and reversals, paying off a year’s worth of building blocks in five short, explosive issues.

Final Thoughts: Once again, the psychological warfare of the Victim Syndicate shows its true strength in turning one of Batman’s allies against him.